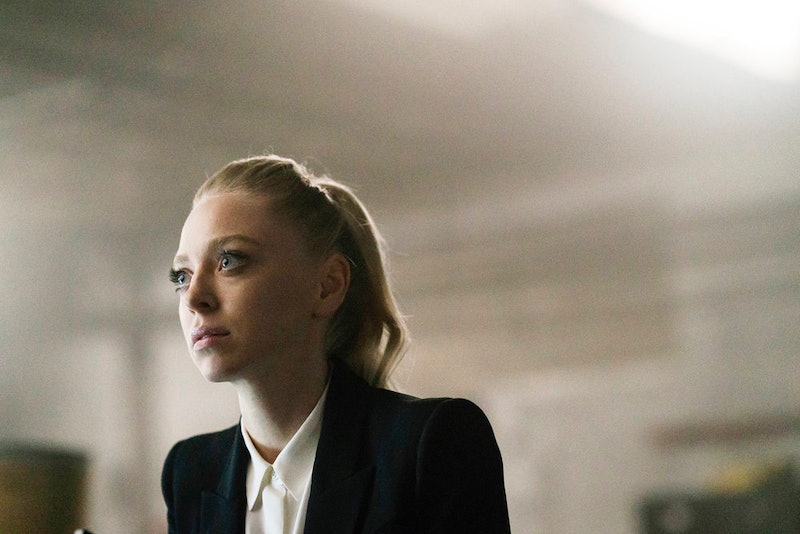 Spoilers for "Eps3.3metadata.par2" follow. Even in a series as defined by twists as Mr. Robot, there's one growing theory that still seems completely bonkers. Yet, Angela and Irving's conversation in the fourth episode of Season 3 may indicate that the Mr. Robot time travel theory is true. If you're a fan of the theory that Whiterose and the Dark Army are creating a time machine, you probably ate up this scene between Angela and Irving in the Nov. 1 episode just like Irving ate up Red Wheelbarrow's ribs.

The time machine theory has been really picking up steam (or, whatever picks up in time travel) in Season 3, but you can actually go all the way back to Season 1 for supporting evidence. In the very first episode of the whole show, Elliot says that his favorite movie is Back To The Future II. Based on the multiple references to the 1989 movie in Mr. Robot, Sarah Lewitinn of Decider came up with the time-bending theory that Elliot is Tyrell's son from the future.

Yet, you don't have to believe any of the mixed-up identity theories to buy into the time travel one. Because, as Tim Surette of TVGuide noted, another hint from Season 1 that made time travel even start to seem feasible in the world of Mr. Robot was a non-Michael J. Fox related quote from Whiterose. When she first met Elliot, Whiterose told him, "Every hacker has her fixation. You hack people, I hack time." Although most fans didn't think this line was literal at the time, Season 3 of Mr. Robot is changing that.

During the Season 3 premiere, Whiterose (well, his male identity Minister Zhi Zhang) looked out over a giant machine that resides in the Washington Township nuclear power plant. Later, Angela asked Elliot, "What if I told you we could make it like none of this ever happened?" She followed up with, "If we could take it all back from the beginning, what would you be willing to sacrifice for that?" When Elliot said that's not possible, Angela responded, "What if I told you it is?"

The Season 3 premiere revealed that Angela is working with the Dark Army to manage Elliot's Mr. Robot side. She stated that she was betraying Elliot because of her faith in Whiterose. When Angela met Whiterose in Season 2, Whiterose said, "I am going to prove to you why you need to drop this mission" of destroying E Corp. And whatever proof Whiterose offered Angela led her to where she is now in Season 3.

So when Angela says to Irving in Episode 4 of Season 3, "I have to ask, did Whiterose ever show you?" the first thing that comes to mind is that she is discussing this proof. And this proof might just be the machine at the power plant since whatever Whiterose showed Angela was powerful enough to motivate Angela to align with the Dark Army. Irving confirms he has seen this mysterious item too, and Angela asks, "And you believe in it?"

This conversation at the Red Wheelbarrow echoes what Whiterose said to Angela in their Season 2 meeting: "I don't want your proof. I want your belief." Because though Angela got some sort of proof from Whiterose in Season 2, it seems to have resulted in belief. Sure, Angela may be showing some signs of doubt by questioning what Irving thinks, but Portia Doubleday's Angela believes in something now because of Whiterose. What exactly that something is, fans don't know since it's being intentionally withheld by showrunner Sam Esmail — at least for now. Esmail told Entertainment Weekly after the Season 3 premiere, "[Doubleday] really has to be convincing and really committed, even though we don't entirely understand what [Angela's] committed to."

Based on Irving's response to her questions in "Eps3.3metadata.par2," Angela may not be the only person to be committed to this unexplained entity. He says that technology is "mind-boggling" and wraps up the conversation by saying, "My point is, I think anything is possible." The technology they are discussing could actually be in reference to other Mr. Robot theories, such as the ability to interact with parallel universes or discovering the perceived world is a computer program (à la The Matrix). But of all the seemingly impossible things in the known world, time travel might be the most universally intriguing one to humans... especially to a human like Angela, who is almost damaged beyond repair because of the death of her mom years ago.

So although Angela and Irving's conversation is intentionally vague, it does make the time machine theory a bit more legitimate. Of course, that doesn't mean this theory is actually true, since Esmail could be misleading the audience. Along that line, whatever Angela believes in could be a manipulation on the part of Whiterose anyway. Based on everything viewers have seen so far from Whiterose, she's not to be trusted, so Angela could be just as in the dark as Mr. Robot fans when it comes to Whiterose's true intentions. And while Angela may think that Whiterose is capable of giving her what she wants, the truth of the matter is that whatever Whiterose is up to, it exists only to serve her purpose.