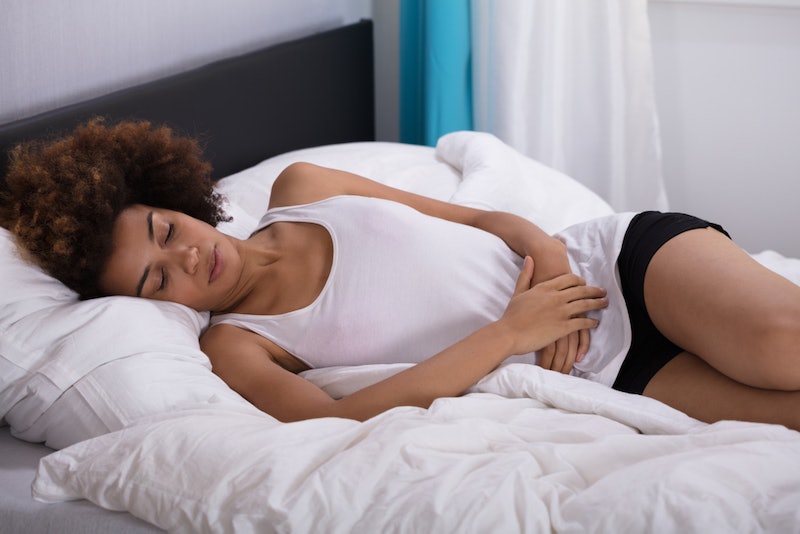 If you're a person who menstruates, you're probably well aware of your period's effect on your body, whether that's on your skin, your mood, or your digestion. And if you've ever been woken up by searing cramps, or found yourself staring hopelessly into the darkness three hours after you first switched off the light, it's likely you've ascribed your sleep woes to your period, too. So does your period affect your sleep? A new study says yes — and in more ways than you might expect.

Researchers from the Cleveland Clinic Lerner College of Medicine, at Cleveland, Ohio's Case Western Reserve University, concluded that your sleep is most likely to be disturbed in the few days before your period starts, after tracking the sleep of 10 healthy people over two menstrual cycles. Their findings support previous figures by the National Sleep Foundation, which attest that "25 percent to 33 percent of menstruating [people] in the United States have reported more disrupted sleep during the weeks before and/or during menses."

Anne E. Kim, a medical student who carried out the study at the National Institute of Environmental Health Sciences, explained in a press release, "Increased sleep disruption was found in the late luteal phase, which corresponds with the days directly prior to menses."

The scientists looked at four metrics of sleep quality: sleep efficiency, which Vox defines as "the percentage of time lying down that you're actually sleeping," wake after sleep onset, number of awakenings per night, and sleep fragmentation index (a method of measuring sleep disruption, taking into account the number of awakenings a night and the time spent asleep). They compared the results from the late luteal phase, or the few days before menstruation, with those from the early follicular phase, or the start of menstruation.

In the few days before the participants' periods started, their sleep efficiency was 3.3 per cent lower, they awoke an average of three more times per night, and the time spent awake after sleep onset increased by 15 minutes. The sleep disruption corresponded with changes in ovarian hormone levels: according to a press release, "E1G was linked with more awakenings, and PDG was linked with a trend toward higher sleep fragmentation index."

So there you have it: as if cramps, acne, and low mood weren't enough, you can now officially add disrupted sleep to the list of things to curse your period for. There is one tiny ray of hope, however: according to Anne E. Kim, people who menstruate might be able to minimise the disruptive impact of their period on their sleep. Menstruating people should be "particularly cognisant of practicing good sleep hygiene in the week before menses," Kim said. Take a look at some sleep hygiene pointers here.