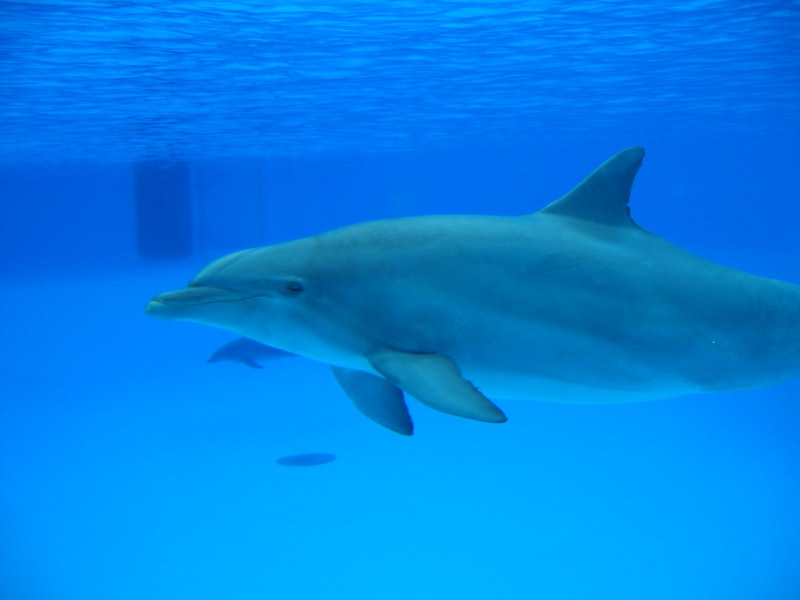 Because the world deserves some pleasant news (and also for scientific purposes, I guess), researchers have released a new study with evidence that male dolphins give female dolphins gifts as an apparent part of their mating rituals. ‘Tis the gift-giving season for every species, I suppose.

The study, published in the journal of Scientific Reports, was conducted by researchers from the University of Western Australia, University Zurich, and Murdoch University. Over the course of a decade, researchers studied the habits of humpback dolphins off the coast of Australia. They found dolphins partaking in a ritual not typical of most non-human mammals: gift giving.

Male dolphins were documented presenting female dolphins with large sea sponges, which is the first time this sort of ritual has been seen in this species. (Present giving is, however, well document in many species of birds.) As a press release for the report states, researchers initially witnessed the practice when a male dolphin dove to the seafloor to retrieve a large marine sponge. The dolphin then returned to the surface, balancing the sponge on his nose, and then pushed the sponge toward the female dolphin. (In case you’re not great at wrapping gifts, may I suggest presenting all future presents by simply balancing it on your nose?)

Previous research has found that some dolphins use sponges in order to fish, turning the sponge into a tool and thus solidifying dolphins imminent usurping of the human race. While not confirmed by this recent study, the female dolphins could potentially be using these sponge gifts in order to get food. A gift that’s thoughtful and useful? Dolphin usurping humans is double confirmed.

The study also found evidence of male humpback dolphins working in groups in order to help each other find a mate. “The formation of alliances between adult males for the purposes of coercing females is uncommon, since mating success cannot be shared,” said study co-author Dr Stephanie King. Put less scientifically, dolphins are using wingmen. Our inevitable inferiority to dolphins as a species is now confirmed trice.

“It highlights to us that there is another species out there that is quite socially complex, more socially complex than we had previously recognized, and also that they engage in these complex behaviors,” lead study author Dr. Simon Allen said of the study in a video.

Dolphins’ social complexity doesn’t come as a complete surprise, given previous research that suggest just how smart they are. One recent study described some of the more “human-like” lives dolphins lead, often engaging in play and demonstrating the ability to develop different dialects. The study even suggested that dolphins like to gossip, evidenced by making “signature whistles” for dolphins who aren’t present.

At least when the dolphins take over, maybe they’re reboot Gossip Girl with an all-dolphin cast.

Authors of this newest study aren’t entirely sure about the purpose of gift-giving among dolphins. One potential explanation is that the ritual is a “display of [the male dolphin’s] quality,” Dr. Allen stated in the press release. Other explanations are admittedly less adorable, with researchers saying the gift could be used “as a threat in the behavioural contexts of socialising and mating.” Essentially, male dolphins could be “threatening” female dolphins with the gift, forcing them into mating. (I take back everything I said about dolphin overlords: females don’t need to feel threatened by an entirely new species.)

As a follow-up this newest study, researchers hope to observe whether bringing gifts has any effect on a dolphin’s odds of mating, specifically through studying their behavior and eventual genetics. If dolphins are as similar to humans at other studies suggest, gifts may be just one of dolphins’ many love languages.