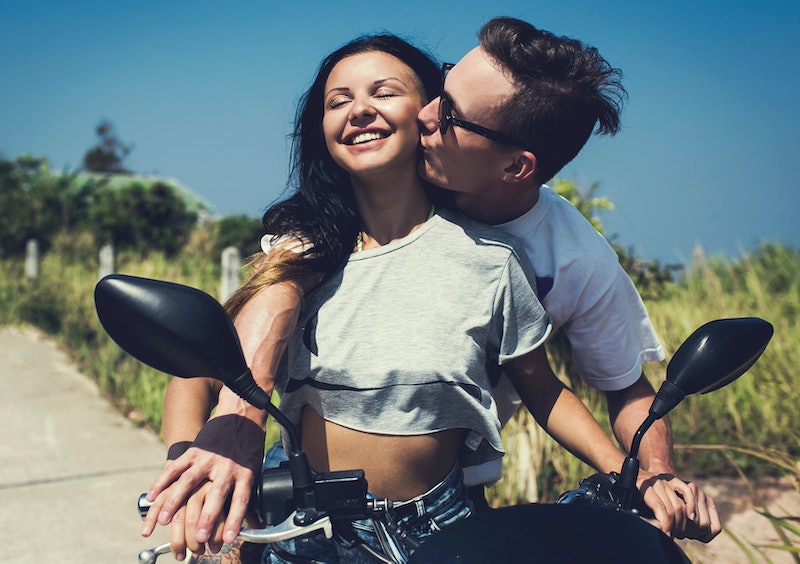 If you’ve ever felt like you and your partner aren’t on the same page when it comes to how you express and receive love, you’re probably right. According to Dr. Gary Chapman there are five love languages and the chances that you’ve found someone who speaks the same love language as you are one in five. Which, although good odds, doesn’t guarantee that the person you love now or anyone you might love in the future might speak the same language — and that’s totally OK. You don’t necessarily have to speak the same love language in order for your relationship to succeed.

“I believe the relationship theory of love languages are very relevant to finding your perfect match, but not in the way that most people assume,” senior matchmaker and dating coach Lori Salkin tells Bustle. “People do not need to speak the same love language to succeed as a couple, rather they need to understand the love language their significant other speaks. That is not easy; it not only requires understanding the person and how they are different you, but that what is important to them is different from what is important to you and being able to separate your wants and needs from theirs to give them what they want and trust in return that they will give you what you want while neither of you is acting for yourself, but only for the other. If it happens to be you speak the same love language, that is significantly easier!”

But before you can figure out what your love language is, as well as your partner’s, we should probably cover what they are in the first place. Here are the five love languages.

The 5 Love Languages: The Secret to Love That Lasts , $10, Amazon

According to Chapman, those whose love language is “words of affirmation” use words to affirm people of their love for them. Whether it’s compliments, verbal support, or just being super vocally communicative about their love and appreciation, people who speak this language are all about words and using them. If they could, they'd probably write you a song for every day of the week — and sing it to you.

For the percentage of people whose love language is “acts of service,” action speaks louder than words, therefore having a far superior impact than any words could possible have. While these people are far less likely to give a compliment or something else verbal, they will go above and beyond in showing their love by doing things they know their partner will interpret as love.

Although there’s the mentality that money can’t buy love (oh, really?!), people whose love language is "receiving gifts" might disagree a bit. It’s these people who feel most loved when they’ve received a gift. But what this also means is that they’re more likely to show their love by giving gifts, because the receiving of goodies is ingrained in their mind as what represents love. So... this one seems like a win-win for everyone involved.

For those whose love language is “quality time,” it’s all about devotion and focus on the person they love. It’s not just about having a conversation, but turning off the TV, putting the phone on silent, and locking the world out so that person, the one who is loved, doesn’t doubt for even the slightest of seconds, just how much they are loved. These people also understand that “quality time” doesn’t exactly mean sitting on the couch next to each other, binge-watching Stranger Things.

As its name suggests, the “physical touch” love language means that those who speak this one need to be touched, caressed, kissed, hugged, cuddled — the works — in order to feel loved. Without it, these people have a hard time understanding that they’re loved, as they literally want to be physically loved. If you’re not a natural cuddler, but you’re in a relationship with someone who speaks “physical touch,” then you may have to step up your game.

Despite what the love languages represent, Salkin is quick to note that while the love languages might seem somewhat gender specific in regards to how we tend to stereotype — “receiving gifts” being something women prefer, whereas “acts of service” are something men prefer — for Millennials, that’s simply not true. “We have women in CEO positions and running for President," says Salkin. "We have men who love children and are first grade teachers and angling towards being a stay at home towards. The most important thing in a relationship or in looking for a relationship is not to find someone who speaks your same love language, but someone whose love language you understand so you can validate them in the way that is most meaningful to them."

Takeaway? Love languages do not make or break a relationship, but being aware of what languages both you and your partner speak are going to make things easier on you both with that awareness in your back pocket.