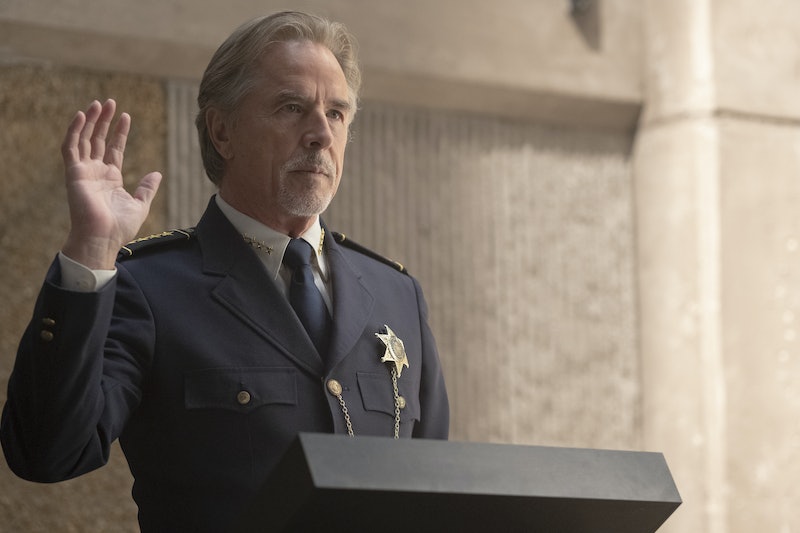 Spoilers ahead for Watchmen Episode 1. Don Johnson's Judd Crawford in Watchmen seemed poised to protect and serve alongside Regina King's Angela Abar. But Chief Judd Crawford unexpectedly faced the music when he was murdered in the series premiere. While Johnson's character isn't from the Watchmen comics that inspired Damon Lindelof's HBO series, his fate pays homage to how the 1986-1987 comic series (and 2009 movie) began. Similar to how Rorschach investigated the death of the Comedian in Alan Moore and Dave Gibbons' creation, Detective Abar will investigate the death of her deceased friend and boss, so his character will still play an important role in the story going forward.

Ahead of the series premiere, Johnson's character wasn't anticipated to die since the Miami Vice actor was featured so prominently in the previews. But once the action got started, the foreshadowing was abundant. Judd's first introduced reluctantly watching a production of the musical Oklahoma! where the character named Jud dies. To further connect the musical, the story, and the setting of Tulsa, Oklahoma, the song "Pore Jud Is Daid" plays when Angela discovers her boss hanging from a tree. The episode's title, "It's Summer and We're Running Out of Ice," also comes directly from the song's lyrics. So while there was no comic counterpart to compare Judd to, viewers should have prepared for Judd's death given these theatrical references.

As Judd was headed to the hospital to visit the police officer who had been shot by the white supremacist group the Seventh Kalvary when he was killed, it sure seems the Kalvary is responsible for his lynching. But the episode's director Nicole Kassell hinted to CinemaBlend that the investigation into Judd's death by Angela and her alter ego Sister Night won't be that straightforward. "Well, [Judd's death is] obviously the driving mystery," Kassell said. "It's gonna be a really fascinating journey to see how both Angela and Sister Night processes it, and reacts, and how are they gonna solve this mystery?"

Besides Judd's death being the driving mystery for the TV series, Lindelof told The Hollywood Reporter that his murder serves to "pay fealty to" the source material. The comic and movie both start with the death of Edward Morgan Blake's the Comedian, who was one of the Watchmen alongside Rorschach. The last line of the first issue of Watchmen is, "The Comedian is dead," and one of the most notable images from the comics is the Comedian's smiley face badge with blood splattered on it.

The new Watchmen is set more than 30 years after the events of the comic books and Entertainment Weekly reported the HBO series did not receive approval of the comic's writer Moore. So with Judd's death, Lindelof is acknowledging the adaptation of the source material. "We have appropriated the original Watchmen against the wishes of one of its parents," Lindelof told THR. "This Watchmen had to end with a moment that's a direct commentary on that appropriation, but also in a way that felt like it wouldn't be befuddling to someone who didn't know that there was a splotch of blood on the Comedian's badge."

The last image of the Watchmen premiere is Judd's blood dripping on his chief of police badge. Now that he's dead, there are bound to be revelations about Judd Crawford just as there were about the Comedian. In the comics, Laurie's Silk Spectre II (who is portrayed by Jean Smart in the TV series) learns Blake is her father.

A case of paternity may not be Judd's secret, but CinemaBlend wondered if Judd has been keeping secrets from Angela and THR theorized that Judd could somehow be the Nite Owl, also from the comics. So even though Poor Judd is dead, his connection to the comics may continue as Angela unravels his murder in Watchmen.