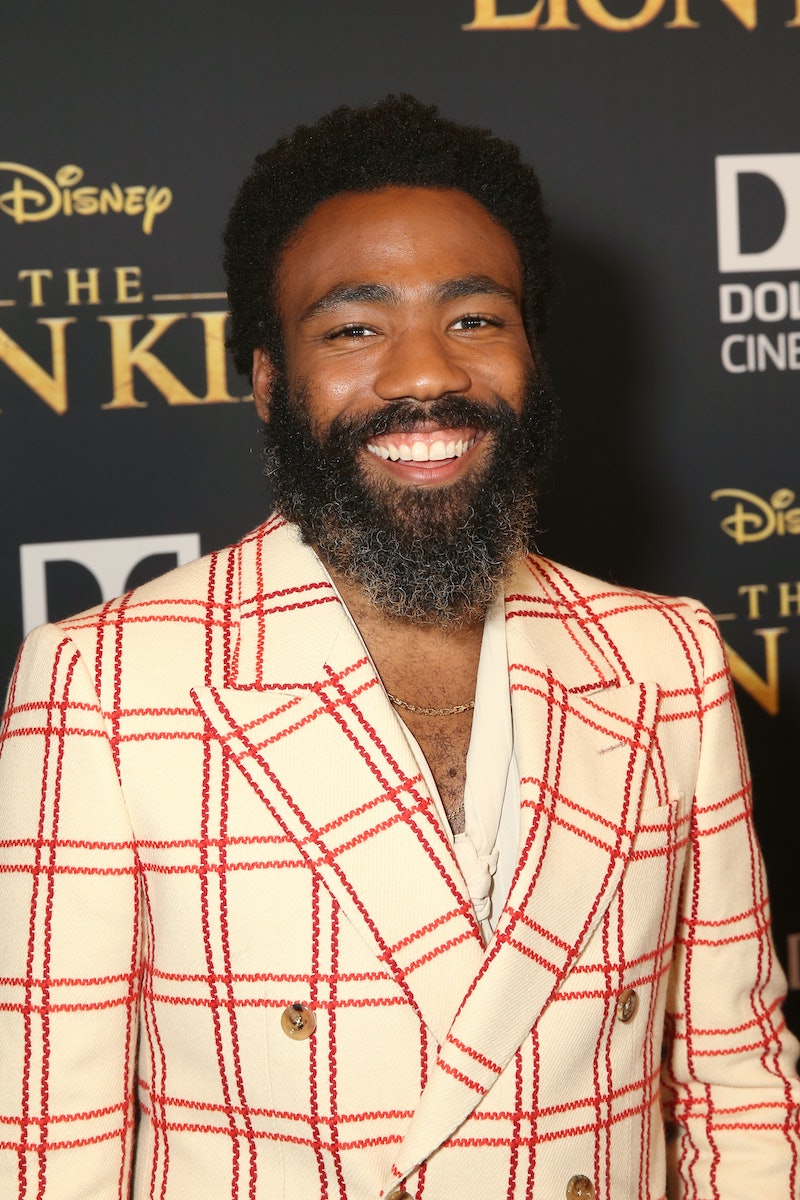 It's a very exciting time to be a Disney fan. Not only will more than one live-action version of the studio's classic animated films hit theaters this year, but another is on its way. Earlier this month, Disney announced that Halle Bailey has been cast as Ariel in their live-action remake of The Little Mermaid, but unfortunately, she's already received some backlash for not looking like the fair-skinned, redheaded mermaid from the original movie. And now, Donald Glover is defending Bailey's casting in the movie with some sweet words of his own.

When it comes to bringing a new take to an iconic role in a beloved film, Glover understands what it's like. After all, he is playing Simba in the Lion King reboot, which will be released later this month. In an interview with E! News at Tuesday's Lion King premiere, he opened up about how he feels about Bailey taking on the role of Ariel, and it sounds like he's supporting her every step of the way.

"I thought that was so special. We were just watching that film and I'm like, that's such a great story but I'm just like, I dunno, I just hope that she's like having fun and don't let anybody make you feel the opposite of how you want to feel. It's a very special role and you earned it, so I hope you're listening."

Glover is totally right. Bailey has obviously earned this role, so she shouldn't let the backlash get to her. She's not identical to the mermaid from the 1989 film, but she's definitely going to bring something new and refreshing to the character, and that's what counts.

And knowing that she was excited to have scored the role, hopefully, she hasn't let anything take that excitement away from her.

Last week, the original voice of Ariel, Jodi Benson, also defended Bailey's casting, telling fans at a convention in Florida that all that matters is that she's able to capture Ariel's spirit, no matter what she looks like. At the time, Benson said:

“We need to be storytellers. And no matter what we look like on the outside, no matter our race, our nation, the color of our skin, our dialect, whether I’m tall or thin, whether I’m overweight or underweight, or my hair is whatever color, we really need to tell the story. And that’s what we want to do, we want to make a connection to the audience. So I know for Disney that they have the heart of storytelling, that’s really what they’re trying to do. They want to communicate with all of us in the audience so that we can fall in love with the film again.”

Like Glover said, hopefully, Bailey is still allowing herself to enjoy snagging such an iconic role, despite what others may say. And knowing how talented the 19-year-old is, when the time comes for The Little Mermaid to finally hit theaters, it seems like fans definitely won't be disappointed.

More like this
Austin Butler Recalls Lisa Marie Presley Showing Him Elvis’ Bedroom
By Jake Viswanath
Pamela Anderson’s Dating & Marriage History Could Be Its Own TV Series
By Jake Viswanath
Jennifer Coolidge Hunted For Jewels & Lashes In J.Lo’s Hotel Room
By Jake Viswanath
Jemima Khan Used Her Own Life As Inspo For 'What’s Love Got To Do With It?'
By Darshita Goyal
Get Even More From Bustle — Sign Up For The Newsletter
From hair trends to relationship advice, our daily newsletter has everything you need to sound like a person who’s on TikTok, even if you aren’t.