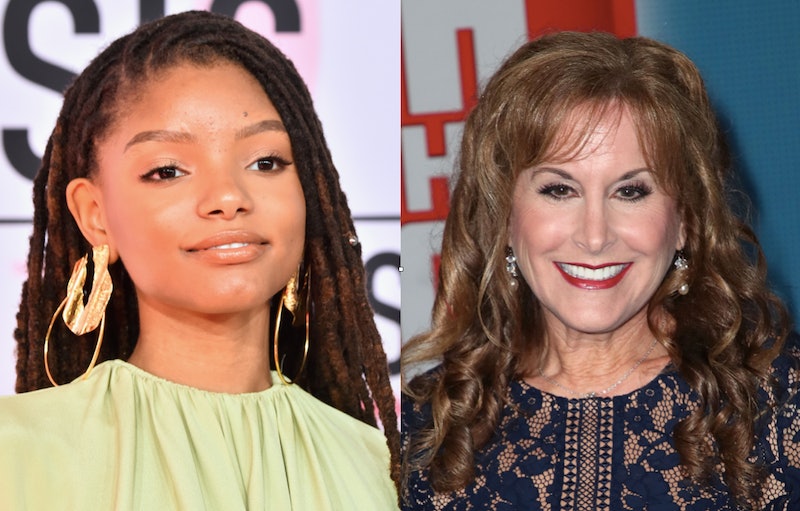 Since the news broke that Halle Bailey scored the role of Ariel in the live action remake of The Little Mermaid, she's gotten some backlash for being a woman of color instead of a white, redheaded woman who looks like the animated mermaid. But as far as the original Ariel is concerned, all that matters is Bailey's spirit. At Saturday's Supercon convention in Florida, Jodi Benson commented on Bailey's casting, and it seems like she's not worried about her filling her fins.

In the years since the animated Little Mermaid debuted in 1989, Benson has fully embraced life under the sea, frequently performing songs from the movie and reprising her role in last year's Ralph Breaks The Internet. And now, she's opening up about what it actually means to take on the role of Ariel, and in her opinion, it has nothing to do with the color of someone's skin.

According to ComicBook.com, Benson said that "the most important thing is to tell the story," adding that Bailey being able to take on Ariel's spirit is all that really matters — just as Benson herself has continued to do, even though she's older than she was when she first voiced the mermaid.

“I think that the spirit of a character is what really matters. What you bring to the table in a character as far as their heart, and their spirit, is what really counts. And the outside package — 'cause let’s face it, I’m really, really old — and so when I’m singing 'Part of Your World,' if you were to judge me on the way that I look on the outside, it might change the way that you interpret the song. But if you close your eyes, you can still hear the spirit of Ariel.”

She went on to add that storytelling is the goal, and no one has to look a certain way to accomplish that. She continued:

“We need to be storytellers. And no matter what we look like on the outside, no matter our race, our nation, the color of our skin, our dialect, whether I’m tall or thin, whether I’m overweight or underweight, or my hair is whatever color, we really need to tell the story. And that’s what we want to do, we want to make a connection to the audience. So I know for Disney that they have the heart of storytelling, that’s really what they’re trying to do. They want to communicate with all of us in the audience so that we can fall in love with the film again.”

“Keep your head up and know that it’s so much bigger than you as a single person fighting these battles,” Huey told the outlet. “If she can stay positive and just remember, there’s more support than there is hatred. It’s an important battle to fight and she’s not alone.”

Production on The Little Mermaid isn't supposed to begin until 2020, but it looks like fans have a lot to look forward to. Bailey's already getting a lot of support of women who have worn Ariel's fins so far, and there's no doubt that she'll kill it when it's her turn.