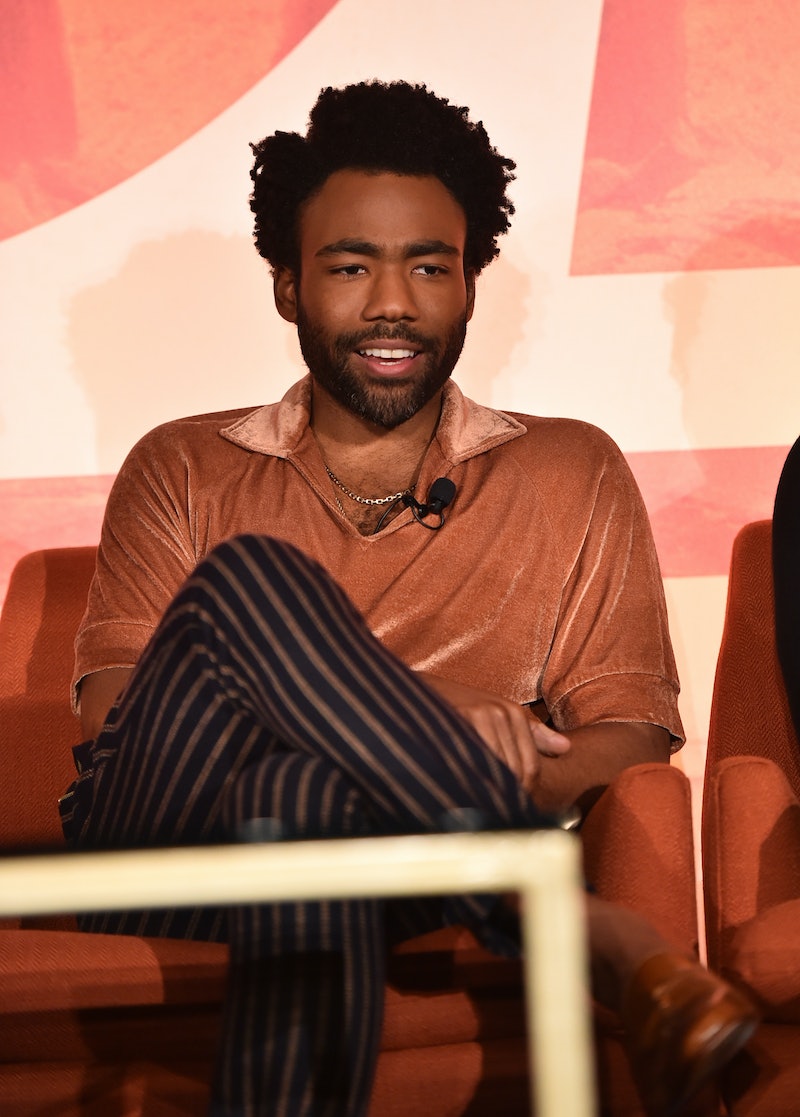 By now, you've almost definitely seen Donald Glover's video for "This Is America"; after all, the Childish Gambino track has gleaned some 120 million views on YouTube since it dropped in early May, and it took the No. 1 spot on Billboard's Hot 100 chart shortly after. Tackling complex themes like racism, police brutality, and incarceration, the powerful video has left many viewers wondering who its intended audience actually is. But when I ask Glover about this during the recent Los Angeles press day for his new movie Solo: A Star Wars Story, he says it's not as simple as that.

"It's never really a question of 'Who is it for?' because you're not really in control of that," explains Glover, sitting down on a hotel couch in mid-May. "But I think it's always a question of who I am."

Since "This is America" was released, the musician and actor has been keeping a healthy distance from the internet and its many takes on the video as a means of protecting his own "sensitivity," as he told Jimmy Kimmel in a recent interview. But while the multi-talented Glover might not be reading each and every commentary piece about "This is America" (and that's probably for the best), he's of course still aware of the video's massive reach and the influence he now has as its creator.

“You know, with the internet… it’s always like, ‘With great power comes great responsibility,’" says Glover. “It’s super awesome to have that power. But the responsibility is to be OK with the fact that, Yeah, it’s out there. And people do what they want. So, it’s not my place, really, to speak on [how it's received]. But I’m completely aware of the responsibility that comes with that power.”

The massive viewership and success of "This is America" shows how quickly art and ideas can spread across the globe, something Glover tells me that he's particularly excited about. "We can talk to everybody in the world now. And I think that’s super cool," he explains. "Like, this is the first time ever you can really make world music, world art… and everybody knows what we’re talking about because there’s a common language between people. And it’s not impossible for a kid from Detroit to understand an art period from Brazil at a certain time, or an emperor from a certain time in China. It’s easy to get that information if you’re able to contact each other.”

Still, in the age of the internet, dispensing your art out into the world (especially art that is deeply personal, or tied in some way to your identity) does inevitably come with a unique set of challenges. Because, like Glover says, exactly who ingests that piece of art, and how that person interprets it, is impossible to predict or control. But its clear from the reception of "This is America" that the majority of people who've seen the video are drawn to its message, and taking away important ideas about race, class, and incarceration. By and large, people are viewing the video as a powerful commentary on systemic violence, the idea of ignorance, and what it means to be black in the United States today.

So while Glover might not be preoccupied with the intended audience of "This is America" or how people are responding to the video, it doesn't really matter — as he says himself, that stuff out's of his control, anyway. What does matter is the seriousness and scope of the issues discussed and shown in "This Is America," and the fact that regardless of what they think, everyone is watching.