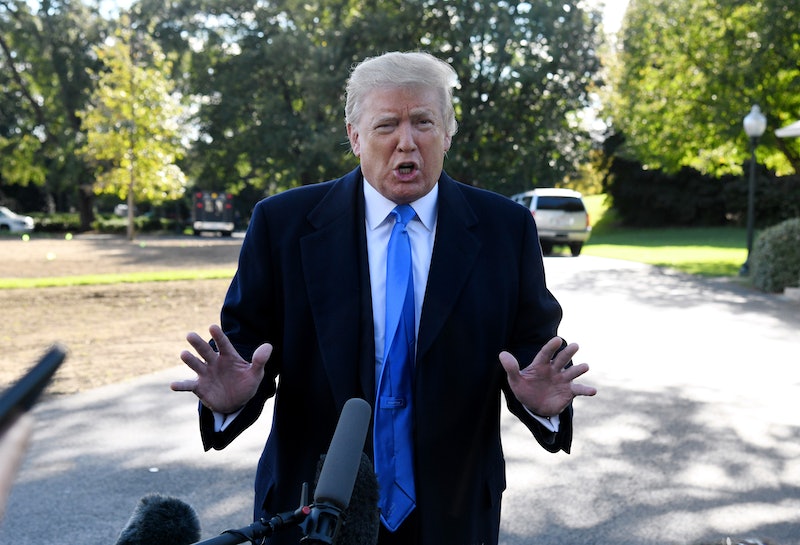 President Donald Trump's reelection committee has wasted no time raising — and spending — money for his reelection. The Washington Post reported that the campaign, through several committees, has been raking in the money for his reelection and reached a massive dollar amount as of Sep. 30. Donald Trump 2020 campaign donations already surpassed $100 million, per numbers given to the Federal Election Commission on Monday night.

The filings covered the third quarter of 2018 and donations totaled some $18 million from July to September. That brings the fundraising total since he filed for reelection Jan. 1, 2017, to $106 million, The Post reported. The numbers are available on the FEC website, but they haven't been sorted and processed yet.

According to the Donald J. Trump for President, Inc.'s filing, the campaign has $35 million on hand as of the end of September. Added to the other two joint fundraising committees with the Republican National Committee, the cash on hand jumps to nearly $47 million, The Post reported.

The campaign's spending is up, too, particularly as the president tours the country to support Republicans in the midterm elections with more of his rallies that resemble the 2016 election campaign. The New York Times noted that the campaign's spending more than doubled this quarter from last, to $7.7 million.

Lara Trump, Trump's daughter-in-law and also senior campaign adviser, said in a statement given to CNN that the donations are a response to the president's "unparalleled results." The statement continues, "Grassroots America has responded to these remarkable results and the booming Trump economy with their generous support of our campaign."

Many of the donations are small, less than $200. The Post's analysis of the FEC filings showed that 56 percent of donations were under this threshold.

The key difference between Trump's reelection campaign and that of his predecessors is the timing. Past presidents waited longer before beginning to fundraise in earnest. Obama waited until his third year in office, for example.

As for the spending, The New York Times reported that the biggest recipient of money this quarter was American Made Media Consultants, a company that Trump's people set up to buy TV, radio, and digital ads, with $1.6 million. That can save the campaign money by avoiding middlemen who take a commission — and it also potentially allows for the campaign to avoid sharing all the details of its advertising spending with the FEC, the paper reported.

Close behind in the campaign's spending was Jones Day with $1.3 million. That's the law firm that represents the campaign in its dealings with the FEC. It also represent the campaign in matters connected to the Mueller investigation into Russia's involvement and meddling in the 2016 election.

As for the campaign's work in 2018, Lara Trump, in her statement, connected the donations explicitly to the midterm elections and called on the small donors and "millions more like them to get out and vote in the midterms so President Trump can continue to build on his agenda with even greater success for the forgotten men and women of this great country."

If this giving continues, the president will have a significant advantage over whoever wins the Democratic nomination — potentially in the $100s of millions.