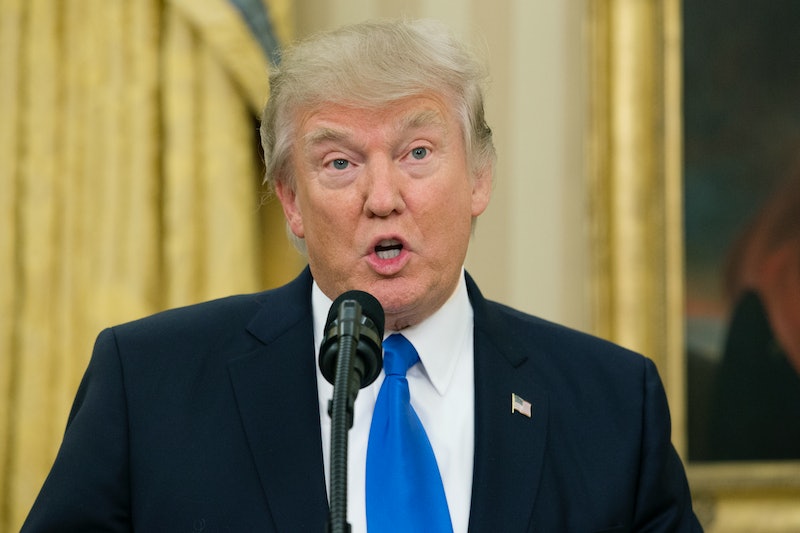 Apparently, a wall is not enough — according to a report from the Associated Press on Wednesday, President Trump threatened to invade Mexico during a phone call with Mexican President Enrique Peña Nieto. Yes, you read that right. If Trump's phone call, or AP's report, is to be believed, then a war with Mexico may not be a far-fetchfed thought.

You have a bunch of bad hombres down there. You aren't doing enough to stop them. I think your military is scared. Our military isn't, so I just might send them down to take care of it.

As it turns out, this isn't the first time Trump has reportedly suggested starting a war with Mexico. (It's also not the first time he has used the phrase "bad hombres.") During the Republican primary race, Trump implied that U.S. military force would intimidate Mexico into paying for his notorious border wall. As for the first "bad hombres" comment, that occurred later in Trump's campaign, during a debate between him and Democratic nominee Hillary Clinton. Now, it's officially part of the growing list of things that should have stayed in 2016.

Reports of Trump calling for an invasion of Mexico may seem all the more powerful now, thanks to his presidential actions since last month's inauguration. Last week, Trump issued an executive order that formally directed the government to build a wall along the U.S. border with Mexico. Then, he signed another executive order that temporarily bans individuals from seven predominantly Muslim countries from entering the U.S.

Both of those executive orders have sparked widespread protest across the country. Since the announcements, demonstrators have gathered in city streets and airport terminals with signs saying "No Ban, No Wall" and other similar messages. Clearly, the wall is still very much a part of Trump's plan — and it may not even be the most troubling part.

U.S.-Mexican relations have had their ups and downs over the years, but war has seemed out of the realm of possibility for generations — lots of them. In fact, the last time the U.S. entered into a major war with Mexico was in 1846, when the Mexican-American War started. In the modern era, most U.S. military invasion has occurred far from America's borders, in places like Iraq and Afghanistan. An invasion of Mexico would mark a clear shift from the status quo.

It's important to note that Trump hasn't publicly referenced an invasion of or a war with Mexico since his inauguration, and the AP report referred to a private phone call between Trump and Peña Nieto. Still, it may be troubling to imagine what the unpredictable president is stirring up behind closed doors.