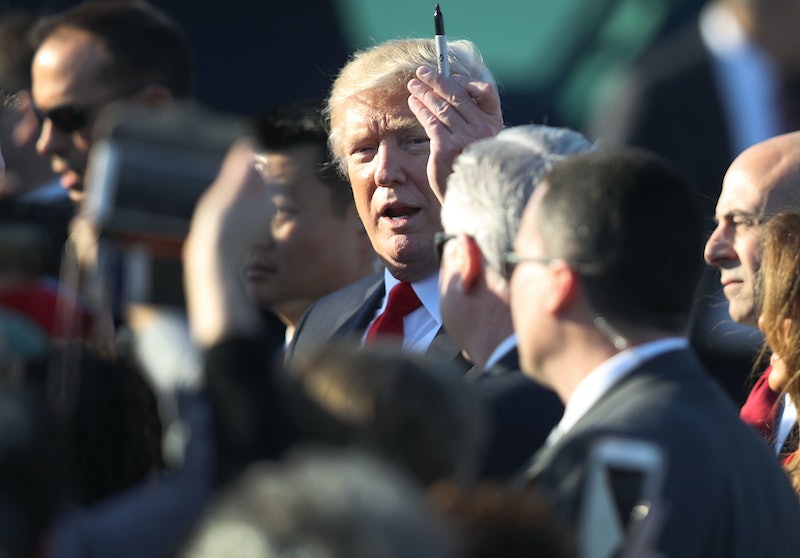 Doubling down on his recent indications that the United States is morally equal to Russia, Donald Trump called American leaders "killers" during his pre-Super Bowl interview Sunday afternoon. Following interviewer Bill O'Reilly's assertion that the Russian president Vladimir Putin is "a killer," Trump qualified the argument by saying that the same could be said about past American leaders.

"We've got a lot of killers. Boy you think our country's so innocent?" Trump asked O'Reilly. "Take a look at what we've done too. We've made a lot of mistakes. I've been against the war in Iraq from the beginning."

The last claim is demonstrably untrue, but the implications of Trump's assertions are interesting. On the one hand, he is questioning American exceptionalism and actually attempting to acknowledge the questionable actions of past leaders. However, he's not really saying that America has a reprehensible history of violence that needs to be immediately ended and atoned for. Trump is using this argument to mitigate Putin's behavior rather than condemn it, which isn't acceptable under any circumstance.

Of course, the situations aren't really analogous either, further devaluing Trump's argument. Putin stands accused of murdering dissident journalists and political critics, not waging official, if retrospectively unwarranted, warfare against the citizens of another country. Furthermore, George W. Bush has admitted his own regrets about the Iraq War, whereas Putin continues to deny his involvement in any of the sketchy crimes he's been connected to.

Obviously, everyone in the United States knew that Trump is a fan of Putin, but the extent to which he's pushed this admiration is concerning on a new level. Ignoring Putin's troubling history in favor of pursuing a diplomatic relationship with Russia doesn't help anyone, and the president criticizing his own country leaves America vulnerable to some international criticism that the U.S. doesn't necessarily have the ability to deal with right now.

Trump's comments are probably just more of his gaslighting, him trying to get his constituents onboard with strengthening his suspicious relationship with Putin. However, his rhetorical approach to that goal could have nearly as significant consequences as his actual pursuit of the goal itself. If Trump leaves the United States vulnerable to moral attacks, the country could quickly lose its standing as a world leader. Trump's ascension to the presidency has been fatalistically speculated as the downfall of the United States — if those predictions do come true, this might be how it happens.