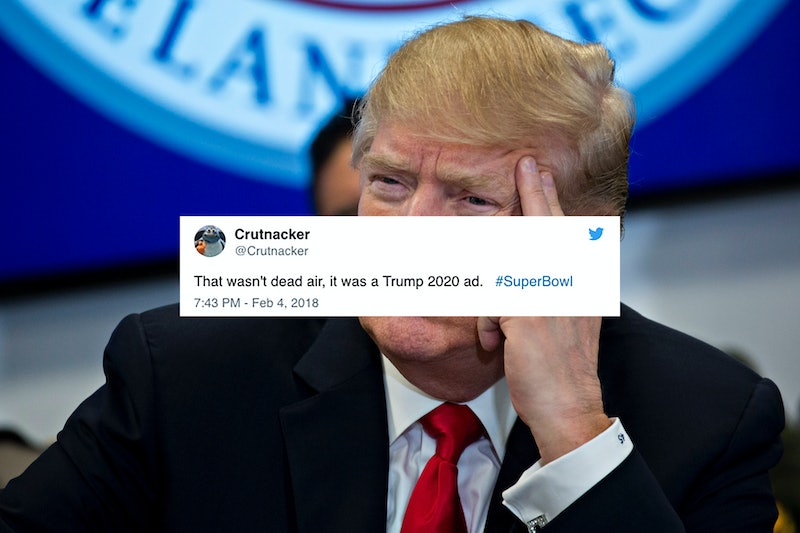 It's no secret that President Donald Trump has some controversial history with the NFL. In September 2017, Trump unleashed his anger towards football players who kneeled in protest during the national anthem, saying he believed NFL should be firing any player who did so. His comments immediately sparked a huge debate and has even caused his supporters to "boycott" the NFL altogether. At this year's Super Bowl, Trump declined to take part in a nationally broadcast interview that has become something of a tradition. And then, strangely, it was announced that the president and the First Lady would be hosting a Super Bowl watch party at a Palm Beach golf club. All of this seems to be leading to one thing: a lot of Donald Trump Super Bowl LII memes going around the internet.

When a brief glitch that NBC said was 'equipment failure' caused a 30-second TV screen blackout during the game, those watching at home were quick to place blame for the technical difficulty — on Trump, of course. From theories that the blackout was actually 2020 Trump ad campaign to guesses that it was his "soul" shining through the screen, the Twitter conspiracies for how Trump was responsible for the Super Bowl 2018 screen blackout are ones for the books.

But that wasn't the the only genius Trump-related material twitter came up with during the biggest football game of the year. Some people thought several of this year's Super Bowl commercials were filled with some low key shade to the Trump administration and others thought he was the one responsible for Kylie's baby announcement coinciding with Super Bowl Sunday. It's safe to say that there was no shortage of hilarious tweets about Trump on Super Bowl Sunday.

Oh, and one more thing: Trump has a close relationship with Robert Kraft, the Chief Executive Officer of the New England Patriots. Trump even has a Super Bowl ring given to him by Kraft and the team that Trump has said he's "honored" to have. See? All of this is a pretty perfect recipe for some epic Trump Super Bowl tweets and memes that may have actually been more entertaining than the Eagles and the Patriots going head to head in the Super Bowl. Check out some of the best ones from the night right here:

1. Is He Working In Re-Election Ads?

Don't let it be true.

How does that even happen?

Up to no good.

Well, that's not going to keep anyone up at night or anything...

At least he lost this one.

13. It Was His Super Bowl Interview

At least it was a short interview.

14. Ohhhh, It Was His Accomplishments

This seems to be a common theme...

18. May As Well Blame The Whole Thing On Him

Whether you're obsessed with the Patriots, a diehard Eagles fan for life, you shut off the game after approximately two minutes, or didn't even realize the Super Bowl was on, it's hard not to be wildly entertained by these Trump tweets and memes.