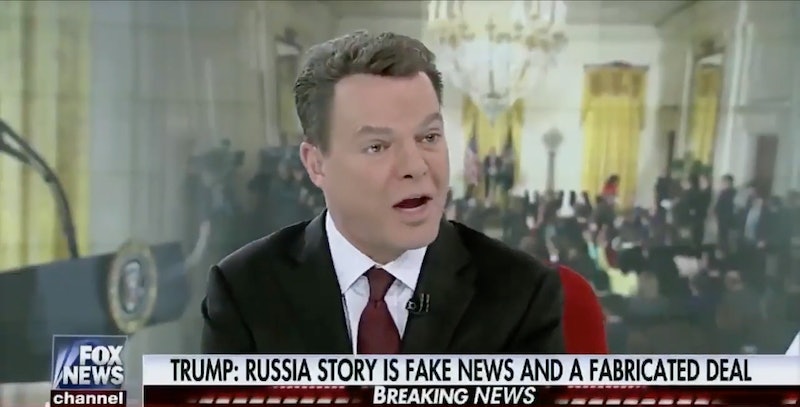 Given everything that's happened over the last few weeks, it's probably no surprise that President Trump's latest press conference was chaotic, scatterbrained, full of surprises, and full of falsehoods. But still — even by Trump's standards, and even by the incredibly low standards set by the Trump White House over the last three weeks, this was a disaster. In fact, Trump's Thursday press conference even shocked Fox News, which should give you an idea of how bad it was.

After the presser, Fox News' Shepard Smith weighed in on the event, sounding exasperated.

This president keeps telling untrue things, and he does it every single time he's in front of the microphone. Today, he said, 'I had the biggest electoral win since Ronald Reagan.' He didn't. He said this repeatedly, over and over again, and every time he says it, it's not true. Again: Is it a big thing? No. But he's the one who brings them up. Nobody asked about his electoral college win.

Smith went on to criticize Trump for refusing to answer questions about a much more pertinent issue: The extent of the connections between Team Trump and the Russian government.

When Russia was hacking into the election — hacking into the DNC — your [Trump's] guys were on the phone with the Russians. Did you talk about that? We don't get a straight answer on this question, which leads us to continue to ask the question. And then he says, Russia is a ruse, it's fake news — the leaks are real, but the news is fake. So, that's impossible.

To be clear, Smith wasn't exaggerating that last part: Trump did indeed say that "the leaks are absolutely real, the news is fake." And that is, as Smith pointed out, impossible. If the content of the information is fake, then it is not a "leak." It's just a lie somebody is telling. Likewise, if the leaks are "absolutely real," then the news that documents the leaks' contents cannot possibly be fake.

And yet this was but one of many shameful moments from Trump's presser. Over the course of an hour or so, Trump asked a black reporter from Baltimore to get him in touch with the Congressional Black Caucus (some claimed he assumed she was in touch with the CBC only because she was black), referred to America as "a drug-infested nation," referred to himself as "the least racist person," said that his administration was "running like a fine-tuned machine," and went on a bizarre rant about uranium.

"You know what uranium is, right?" Trump said. "It’s this thing called nuclear weapons. And other things. Like, lots of ... things are done with uranium. Including some bad things."

The scariest part: This administration is less than one month old.