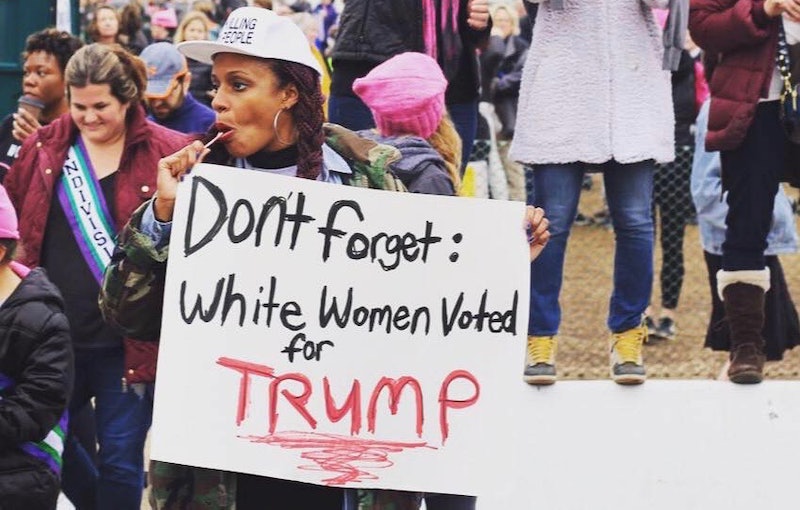 Dozens of amazing photos came out of the Women’s March on Washington. But my favorite showed activist Angela Peoples nonchalantly sucking on a lollipop while holding a sign that read, “Don’t Forget: White Women Voted for Trump.” Fifty-one percent of white women did, in fact, vote for Donald Trump. The photo, taken by photographer Kevin Banatte, quickly made its way around the internet, with many taking to Twitter to praise Peoples — and others, to criticize the LGBTQ activist.

"Yes please divide us even further during a WOMENS March," one person tweeted. Many other users tweeted similar sentiments.

This did not surprise me. I knew ahead of the March that we would experience some form of scrutiny. Black women leaders like Janet Mock and Jamilah Lemieux had already refused to remain silent about the March’s misdeeds — its foolish use of the title “Million Women March,” its initial failure to promote an anti-racist agenda, and its delayed enlistment of women of color (Tamika Mallory, Carmen Perez and Linda Sarsour) to fix it all.

Mock, a transgender activist, wrote in a Tumblr post that she would not attend the event after organizers removed her line about supporting sex workers from the platform — (the line was later re-added, and Mock spoke at the event). Lemieux did not attend the March. She wrote of her decision in a column for ColorLines, noting that she is “not sure” whether the March would be a space filled with “participants who believe that Black lives matter.” She wrote: “It’s time for White women to come together and tell the world how their crimes against Black women, Black men and Black children have been no less devastating than the ones committed by their male counterparts.”

Mock and Lemieux’s voices were among those of many Black women speaking out about the March and its organizers. White women writers noticed, and gave some input of their own.

In an op-ed column for the New York Times published just days before the March, Emma-Kate Symons accused members of marginalized groups (namely “black/queer/Muslim/trans and other identities”) who spoke out against the March’s exclusionary acts of “hijacking” the event.

She wrote: “It saddens me to see the inclusive liberal feminism I grew up with reduced to a grab bag of competing victimhood narratives and individualist identities jostling for most oppressed status.” She urged us to “rise above the sniping about ‘privilege,’ ‘white feminism,’ ‘intersectionality.’"

When we speak of Black Lives Matter, violence against Black women, and higher prison rates among women of color, many white feminists call it “distracting.” That is an unjust, anti-feminist cop-out for those who wish to prioritize their own oppression over that of further marginalized groups.

Heather Wilhelm made similar statements in her opinion column for the Chicago Tribune, titled, “Women’s March Morphs Into Intersectional Torture Chamber.” Wilhelm described the act of women of color voicing our concerns as “feminist infighting.”

I too received criticism as a result of my recent Bustle article titled, “What Every White Woman Attending the Woman’s March Needs To Know.” One white woman sent me a lengthy Facebook message, accusing me of “diminishing other women’s experiences” — by women, she seemed to mean white women.

What we are seeing from Wilhem, Symons, and other white women condemning the concerns of women of color is nothing new. They are unjustly blaming women of color for “dividing” the March. To these women and critics like them, I say this: Don’t come for us.

Just so we’re clear, the March was, in a sense, divided. But what divided the March was not the demand for inclusivity made by women of color, but the centuries of mainstream (white) feminism that has ignored the cries, work, and concerns of women of color.

When we speak of Black Lives Matter, violence against Black women, and higher prison rates among women of color, many white feminists call it “distracting.” That is an unjust, anti-feminist cop-out for those who wish to prioritize their own oppression over that of further marginalized groups.

Women’s rights have, over time, become viewed as white women’s rights only. If one’s feminism does not address race, class, gender and ability issues, it is not feminism at all.

White feminism has long cried “division” when it comes to the inclusion of women of color. For example, white women organizers of the Sandy Springs conference of 1968 refused to invite Black women to the event out of fear that said women would expose their racism and demand more from the women who claimed to promote equality, according to Rory Dicker’s 2008 book, A History of U.S. Feminisms.

As one woman put it, “I don’t want to go to a conference and hear a black militant woman tell me she is more oppressed and what am I going to do about it.”

White women must acknowledge and address their status as oppressors — especially within the feminist movement. The movement has historically marginalized women of color. As just one of many examples, Black activist Ida B. Wells took to the 1913 suffrage parade in Washington, and was told by white feminist leaders to march in the back with the other Black women.

Yes, women as a group stand to lose a lot from Trump’s presidency, but it is intellectually dishonest to ignore the fact that women of color stand to lose much more, as a result of the intersecting oppression of race. Many have reduced our stating this fact to a childish round of “my oppression is worse than your oppression.” That is what is dividing us: white women’s refusal to view the concerns of women of color as legitimate.

Issues of race, sex, class, and ability are tough and difficult to talk about, but the dialogue is vital to progressive social, economic, and political change. I will not overlook injustices within the feminist movement. If white women do not want division, then they mustn’t court it by ignoring their privilege.

Now, whenever I see the glorious photo of Peoples sucking on her lollipop, unbothered as she calls out all of the March’s participants with a single sign, I smile. I smile because that is what inclusivity looks like. Critiquing the movement is the only way it will improve.

White women would be wise to heed her words, “Don’t Forget: White Women Voted for Trump.” They would be wise to listen to our concerns not with defense, but with determination to do better and to be better. Or, as Peoples told The Root: “I don’t think it’s a matter of white women becoming interested in our issues; I need them to recognize they are implicit or complicit benefactors of systems like white supremacy and patriarchy — and that’s a problem.”