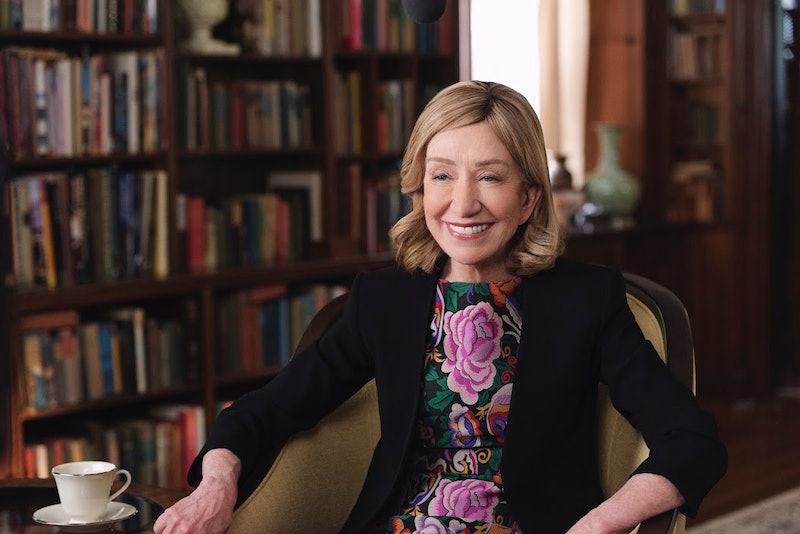 Historian Doris Kearns Goodwin has a message for young people who are disillusioned with two-party politics and who feel like their vote doesn't matter: "Believe that you can do more than vote." Goodwin, an expert on American presidents whose book, No Ordinary Time: Franklin and Eleanor Roosevelt: The Home Front in World War II, won a Pulitzer Prize, tells Bustle that if the past can show us anything, it's that the country is in a time of crisis right now because people have lost faith in the government.

As a scholar who has spent five decades studying American history, she says the unrest in the country today mirrors previous periods, and that history shows us that we can get through it. One of the solutions, she says, is becoming more active as a citizen, and that doesn't just mean by voting.

Goodwin starts most of her answers to my questions with "What history can show...," as if she's turning to the past as a road map for what's happening in the United States right now, and for what could come next. She teaches "U.S. Presidential History and Leadership" in a new MasterClass, released Nov. 19, where she shares stories about presidents including Abraham Lincoln, Franklin Roosevelt, and Lyndon B. Johnson, the latter of whom she assisted in writing his memoirs. The class is meant to teach people how to become better leaders and citizens through episodes like "Developing Emotional Intelligence," "Resilience and the Ability to Grow," and "Why Voting Matters and How to Select the Right Candidate."

Millennials have the highest student loan debt in history, are tasked with coming up with solutions for the increasingly deadly effects of climate change, and also face a minimum wage that hasn't increased with the rising costs of living. As a result, many are skeptical of the political process and whether their votes matter (especially once you toss in gerrymandering and voter suppression of people of color), and have less faith in voting and the government as a whole. One 2016 study found that about half of millennials consider themselves activists, and 70% of them put more faith in themselves than in the government to create the kind of change they want to see.

Goodwin considers that loss of faith in the institutions of government a crisis for the United States, and millennials and other marginalized groups mobilizing is a powerful response — especially if we look to the past.

"What history can show is that the greatest changes that have occurred in our lives in terms of social justice and opportunity have occurred when citizen activism took place," Goodwin says. Being an active citizen, though, doesn't necessarily mean you have to attend protests or go into public service, though those are options. Goodwin points to businesses that have released statements about the social responsibility they have to their customers as evidence that being politically or socially active can take many different forms nowadays. Not everyone who wants to make a difference in the world is going to go into public office, but if you want to have a hand in social or political change, "you can bring it to whatever fields" you work in, "and maybe that makes it seem less overwhelming — that you can't necessarily tackle all these problems at the same time."

The root of all citizen action, Goodwin says, is the belief that something can change. And we're at a time in history when it looks like a lot of people actually do have that belief, despite how bleak things might seem sometimes. She says people should take heart in the fact that so many young people voted in the midterm elections, and that there are now more women than ever in Congress. Many of those elected also weren't career politicians: New York Rep. Alexandria Ocasio-Cortez was famously a bartender and a volunteer for Sen. Bernie Sanders' 2016 presidential campaign before she decided to run for a House seat, where she beat a 10-term incumbent. She said in her November 2018 victory speech, "This is what is possible when everyday people come together in the collective realization that all our actions … are powerful, worthwhile and capable of lasting change."

The 2018 elections may have been a step toward ending years of congressional gridlock, Goodwin says. She says that Congress has accomplished so little recently that "it's almost like they've forgotten how to get something done." And as a result, many citizens have also forgotten what it's like to see real change happen. The midterms were the first sign that there are more people coming into the government who have a real sense that "if we work together, we can get this done," she says.

Goodwin says she cares about history and wanted to create the MasterClass to show people that the government can work for them. She points to Johnson's legacy to show that it's still possible for the government to make things happen. He was able to get bipartisan legislation through Congress that created Medicare and Medicaid; The Civil Rights Act of 1964; and that helped pave the way for NPR and PBS. She says she's "hoping that we don't need a national crisis like a war to mobilize us," but that current lawmakers — or new ones — need to find a way to address the social unrest in the country.

In one of the final episodes of her MasterClass, Goodwin says that understanding history can help citizens better effect change. But she also hopes it gives them a sense of perspective and solace "that we have come through these things before," and we can learn from those who have done so. "Nobody's in this alone," she says.

More like this
How To Fight For Reproductive Rights, Based On How Much Time You Have
By Courtney Young
17 Powerful Photos From March For Our Lives Protests Across The U.S.
By Michelle Toglia
34 Quotes That'll Inspire You On Juneteenth & Beyond
By Syeda Khaula Saad and Siena Gagliano
11 Podcasts About The History Of Juneteenth
By Emma Carey
Get Even More From Bustle — Sign Up For The Newsletter