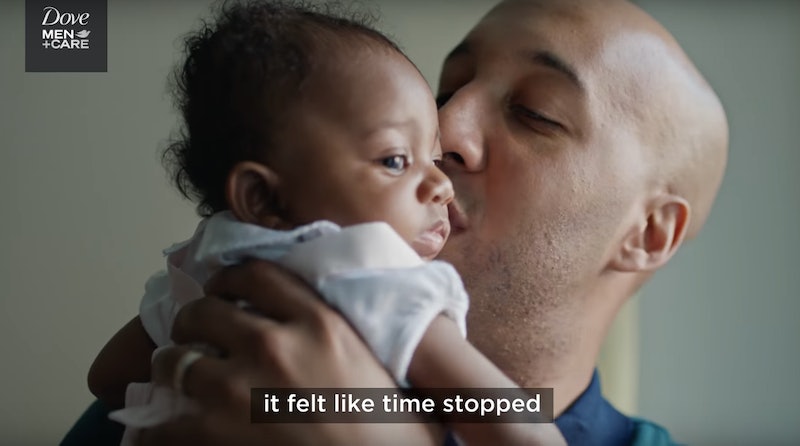 Paid paternity leave in the United States is rare, and one brand is hoping to help change that and lessen the blow in the process. Dove is offering paternity leave grants for dads who can get time off of work after welcoming a child, but who won't be paid for it. As reported by CNN, Dove's Paternity Leave Fund aims to raise $1 million over the next two years, so that it can give $5,000 grants to fathers that will allow them to spend time with their new kids.

Dove Men+Care first launched its campaign in support of paternity leave in June 2018, but this year the brand is taking things several steps forward by introducing a pledge and the Paternity Leave Fund.

As for the fund, Dove has an application on its website that explains, "While our push to make paid paternity leave the new standard is a long-term mission, expectant dads are in urgent need of support right now." To apply, dads must sign the pledge, and then fill out a form that asks how much paternity leave their employer offers, how the grant would help them, and what being a "caring dad" means to them, among other questions.

When Dove+Men first launched the campaign last year, the brand noted that it would spread awareness about paternity leave and the issues that come with it as it currently stands, provide dads with resources about leave, and help change paternity leave policies. Dove also released a short video called #DearFutureDads.

While the new grants will help fathers who have access to unpaid leave, reform is needed across the board when it comes to paternity leave. As reported by Esquire, the United States has no paid paternity leave law at the federal level. And while companies with 50 or more workers can't fire an employee for taking up to 12 weeks off for parental leave, they don't have to pay them. And, of course, this leaves out anyone working for a company with less than 50 employees.

Because of this, fathers tend to take very little time off of work. According to the Department of Labor, 70 percent of fathers take 10 days of leave or less. And according to a 2012 study from the DOL, only 13 percent of dads received pay.

The Department of Labor explains that the benefits of paternity leave include fathers who continue to be involved with childcare going forward and that studies have shown "fewer behavioral problems and improved cognitive and mental health outcomes" for the children. It can also "increase the ability of mothers to engage in paid work, with a positive effect on female labor force participation and wages."

Until the laws catch up with the times, grants like Dove's can help support fathers — at least those who have some sort of unpaid leave — in the meantime.

More like this
Black Women's Equal Pay Day Highlights An Upsetting Problem
By Brandi Neal
Women Around The World Are Cutting Their Hair In Solidarity With Mahsa Amini
By Darshita Goyal
15 Offensive AF Jokes In 'Friends' That Really Aren't OK
By Tolly Wright, Bustle Editors and Meguire Hennes
This Tarot Card Means It's Time To Reach Your Magical Potential
By Brittany Beringer
Get Even More From Bustle — Sign Up For The Newsletter