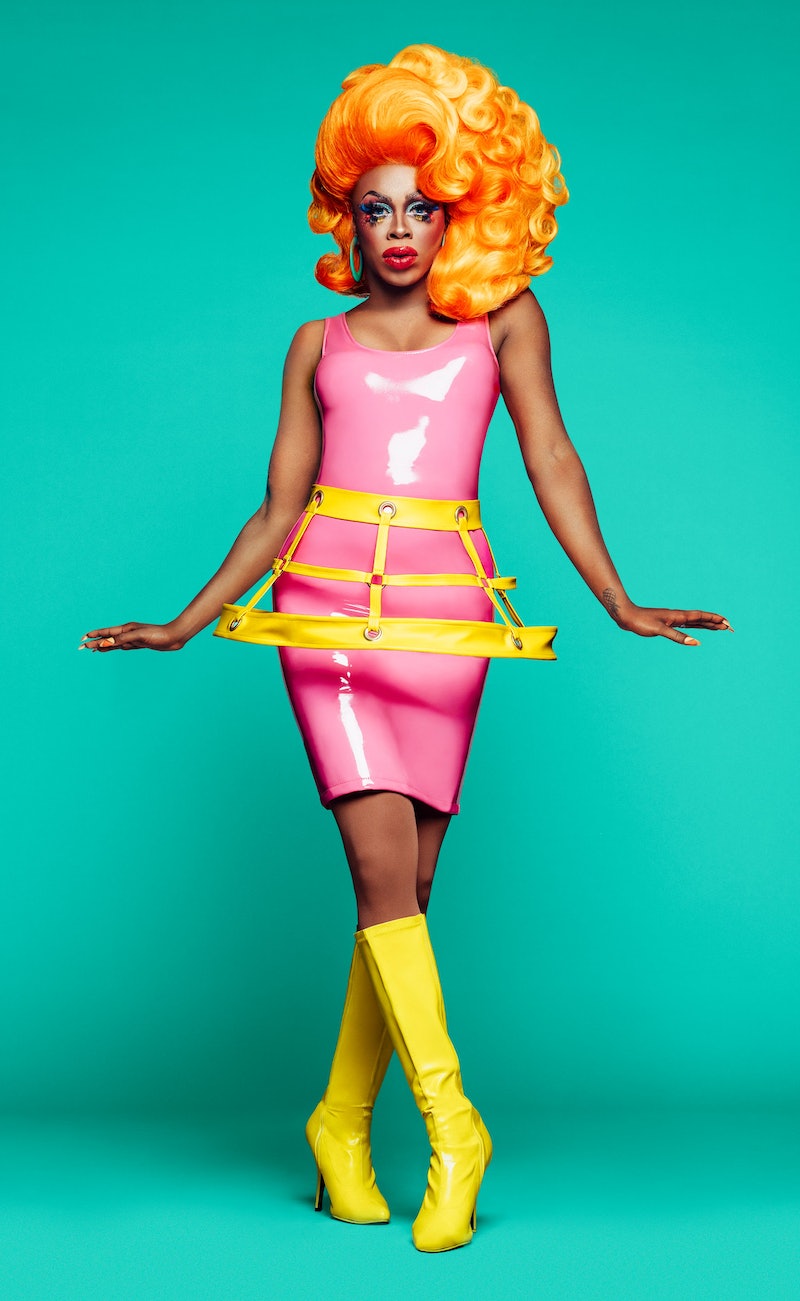 Just when you thought it was too early in Drag Race Season 11 to expect any twists or turns, Mama Ru said think again. The March 14 episode began pretty normally with the presentation of a team acting challenge, but when Team Raja was embarrassingly swept by the competition, Ru said it was time for a reality check. All six members of the team were up for elimination, including Honey Davenport, who tells Bustle that she did not fall off-stage during her lip sync performance like some people think she did. It was, in fact, a signature death drop.

"I actually didn't fall," she says. "I took a death drop off the stage." The camera crew are used to capturing two queens during a lip sync, not six, so Honey suggests that it could've been tricky for them to keep up. "I'm not sure that that could be seen because there were so many of us," she says. "I can imagine that would be a difficult thing for that amount of cameras to show. I did a signature Honey Davenport move which is a death drop right off the stage —  in a gown." A mermaid-shaped gown, at that. "It was actually pretty incredible," she says. "You know, all of the girls behind us were like cheering, like 'Go Honey!' I felt very, very proud of it ... it was a planned part of my performance."

And there you have it. In case you were concerned, Honey didn't take a tumble off-stage. She was simply showing the judges what she was capable of. Aside from the death drop, though, Honey says it was a bit chaotic sharing the stage with five other queens. "It was crowded. I'm like a one woman show. I don't need all those girls," she laughs. "No, it was legendary. Mama Ru gagged us all yet again. I would have preferred to have just one girl to take down but, you know ... I figured if they were gonna send me home, at least it took five other people to do so. But it was quite the experience."

After submitting her Drag Race audition tape eight times (which was "enough footage for a feature film"), Honey says it was a surreal feeling to finally appear on the show. And it was just as surreal to hear that she could be eliminated. While filming the episode, she thought she crushed her part in the acting challenge. "I remember my performance going better than I saw it [on the episode]," she recalls. "And I was just like, 'Oh, if that's what it looked like, I deserved to lip-sync.'"

She anticipated doing well because the challenge gave her the opportunity to write a mini song parody and perform it, which is kind of her thing. "The sheer fact that that was talent I expected to rock and I didn't, it definitely took a bite out of me," she says. "But you know what, it was perfectly fine because the moment I got home, I put my pen right back to that tablet and l started writing awesome, awesome materials" — including her new visual EP called Raw and Unfiltered, parts of which she's releasing every Wednesday. The clip released on March 15 (a day late due to a widespread social media outage) features spoken word from Honey to her "Hive," as she calls it. "What are we fighting for?" she says in the clip. "Equality. Representation. Peace. Join my force. Join my hive. Let's be warriors."

She tells Bustle she's elated to use the platform given to her by Drag Race to follow her life's mission of making the world a more just and peaceful place through her art. "It's not just music," she says. "It's social commentary. It's actually talking about the things that I would like to talk about and addressing some of the issues in the world that we have. And it's given me a chance to be a voice for people who don't have one — for women and for people of color — and I think that, while I didn't do so great on the show, it's created some opportunities that are endless and mind blowing. And I'm just ready for all of them, you know?"

Her time on Drag Race may be over, but Honey Davenport is just getting started.