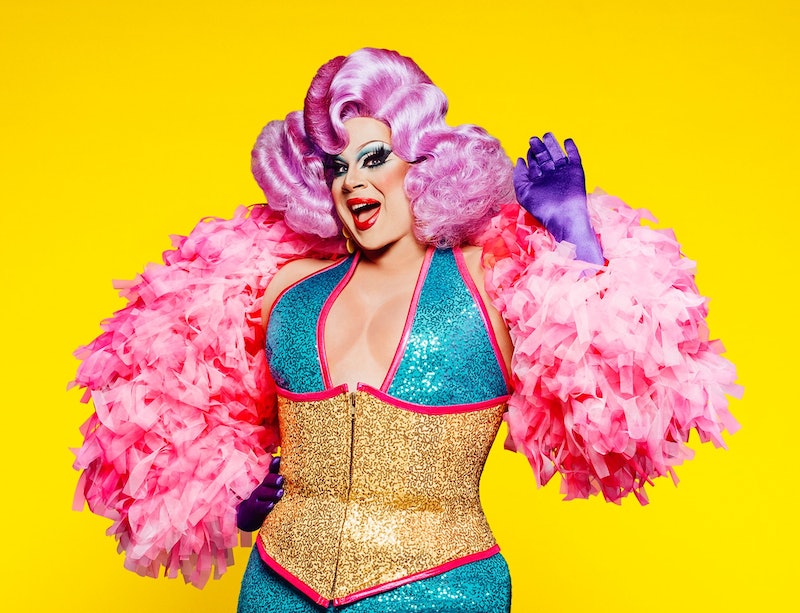 It's nearly impossible to watch Nina West's Drag Race exit without tearing up. Your heart breaks as she chokes through goodbye notes from her sisters, folds her garments into her suitcase, and walks out of the werkroom one last time. When her final episode aired on May 9, Nina watched surrounded by friends and family. And she tells Bustle that although it was tough, having them around — as well as the outpouring of love and support from fans — has helped to lessen the sting of her departure.

"I feel pretty good. I got to watch in my hometown of Columbus last night at a viewing party, and I've been doing drag in the city for 18 years, so I was really surrounded by a tremendous amount of love, and pretty much family and friends. And I think it makes it a lot easier," she says. "I just really wanted that title and the prestige and honor of being America's next drag superstar. And I kind of realized after I got home ... in a slow process, with a therapist, that everything was going to be OK. I'm honestly sitting in a really good position today and I feel really great. And the outpouring of love and support from the fans is really overwhelming."

Immediately after Ru asked Nina to sashay away, viewers exploded in outrage on social media. They couldn't believe she was sent home over Silky Ganache, who has received criticism from the judges multiple times for unpolished runway looks.

Both queens had to lip-sync for their lives, and in that moment, Nina says she was just as shocked as fans that she was the one leaving. She had just collected her second challenge win the week prior and was so close to making it to the top five. "I think that I had a false sense of security having come off of a win the previous week," she says. "I think I was legitimately in a state of shock. Like, I froze. I froze up."

The controversial exit brought Nina fans out of the woodwork, and she says she truly can't believe it. Although she wishes she could've stayed in the competition, the nature of her elimination established a legacy that may not have happened otherwise.

"I am thrilled that I'm getting this much love and this much support, and that people still want to see me on the show," she says. "I did what I set out to do, and I am really proud of that. You know, I got to connect with the fans in a way that I dreamt of ... and I feel really lucky that the fans opened their hearts to me, and that my story connected and resonated with them."

Nina added that initially, when the season premiered, she didn't get a lot of attention on social media. "Whatever the turning point was, I don't know what it was, because I can tell you I wasn't feeling the love the first couple of episodes," she says. "People weren't Team Nina initially." But they came around once they got to know her. Like she said before she left, Nina never once lost herself in the competition, which is important, especially because there haven't been many queens like her on the show.

With the rise of the Drag Race empire, the drag world seems to have become accustomed to a certain kind of beauty and glamour: "fish," if you will. But instead of striving to fit into that, Nina has persistently resisted it. She accepts her campy, theatrical, broad-shouldered drag as beautiful, which is something she says her Drag Race experience taught her to do.

"I learned a lot about myself," she says. "I learned that when I was really forced to look at it and have a camera put on me, coming home, that I was ... a lot more insecure than I ever thought I was. But then I also learned that I am so intrinsically unique to the world of drag, that I just need to celebrate that."

Since leaving the show, Nina has learned to embrace her uniqueness as a strength rather than a fault. "I might not be as beautiful or turn the stunning looks on the runway like Brooke Lynn ... but I also know [that] the talent that I have is really unique to me, and this is something that is equally as beautiful," she continues. "That has been a long conversation with trying to figure out, how do I place value on what I do? I think for so long, I took it for granted, and I didn't really cultivate it. And this [Drag Race] change came into my life right when I needed it. I needed to water my garden in a different way."

Now that Nina has figured out how to properly tend to her garden, she'll only continue to blossom. Perhaps her flower will be plucked for an upcoming season of All Stars, where she can get the redemption fans clearly want to see for her. Until then, they can — and they will — provide the water, sunlight, and little bit of love she needs to keep growing.