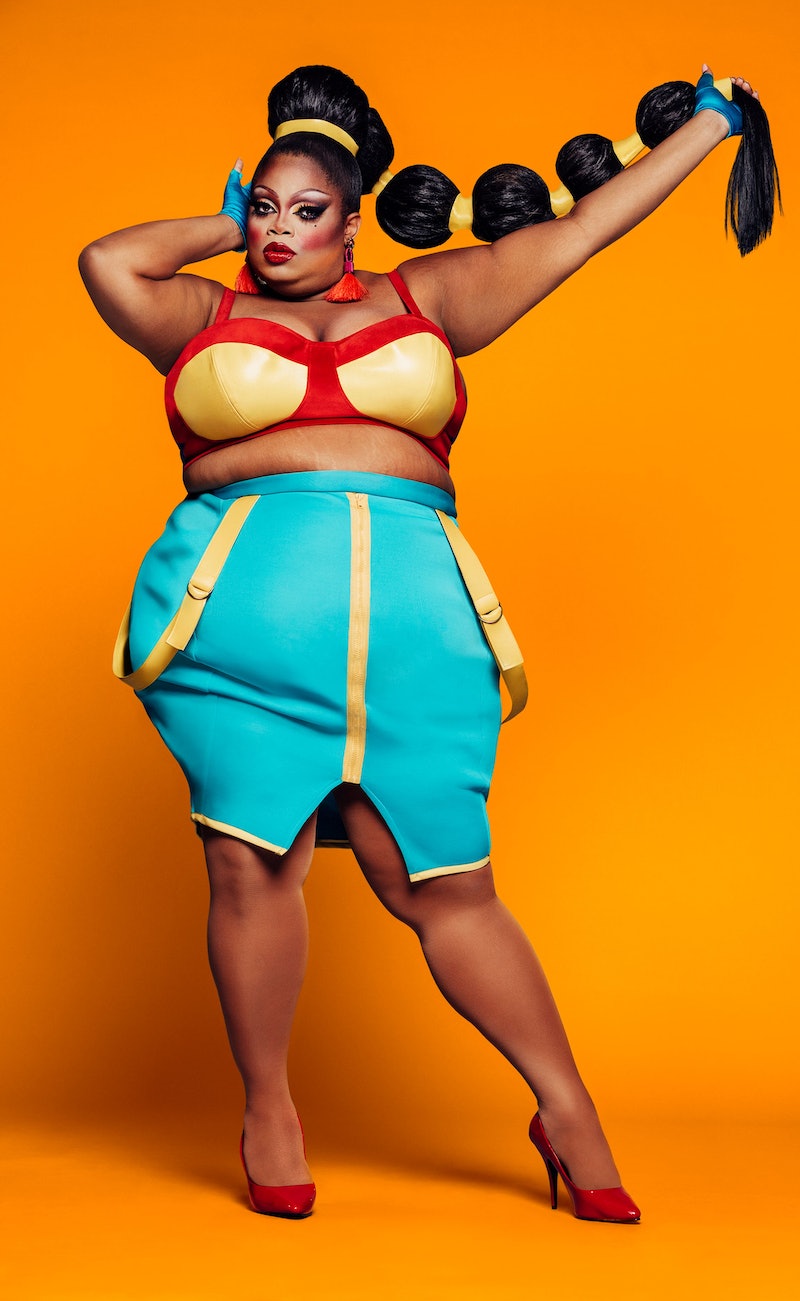 Even though we're only two episodes into Season 11, it's pretty obvious that Silky Nutmeg Ganache is the Drag Race queen to follow. Every season has its villain or controversial figure, and for now, Silky has inadvertently claimed that spot as her own. We're still getting to know her, so her intentions aren't totally clear. But many of her Season 11 cyst-ers (Sorry, Soju — had to!) think she's only on the show for her five minutes of fame.

No one can deny that Silky's boisterous personality is, well, extra. And that's why some of the queens have a problem with it. When guest judge Miley Cyrus went undercover to visit the queens in the werkroom during the season premiere, Silky scooped her up into her arms and galloped her around the room. And this week, during the episode's photobombing mini-challenge, she literally stripped naked. But the challenge was to be the most extra — and Silky accomplished that and won. So really, she just completed the task at hand. Many queens have said it in the past: if you don't stand out, you go home. And Silky's not trying to do that anytime soon.

Because she was one of the mini-challenge winners, Silky became team captain for the acting maxi-challenge and had the privilege of choosing her team members. As the two teams rehearsed, Mama Ru made her rounds to read the room. He asked Brooke Lynn Hytes' team what they thought about their competitors. Ariel Versace, who has been captured throwing some serious shade at Silky already, was the first to chime in.

"I feel like there's a lot of personality over there and it might clash," she said. Ru, feeding the fire, asked them who was problematic. "I think their team captain is a little problematic," Ariel said. "She's very loud, she's a big personality, and I feel like, at this point, she's not gonna let anybody else on her team shine over her." Her teammates nodded in agreement. "She knows that she's on TV and she's gonna get her moment," Brooke added. Ariel then quipped, "I just think there's a difference between having a strong personality and being obnoxious." What did Ariel mean by "big personality?" It just sounds like a watered down way of expressing how she really feels about Silky, which is obviously not great.

Whether or not Silky, at some level, impedes boundaries of personal space is debatable, but she didn't step on her teammates toes in their performance like Ariel predicted. Her team actually worked quite well together, and Silky even credited her supporting queens for her success. But when Ru told her about the tea that was spilled by the other contestants, the claws came out. She declared that her unapologetic presence isn't going anywhere. "Certain people have a misperception about me," she said.

Silky is a lot more than a loud voice and animated personality. She has a master's degree in organizational leadership and has applied for a PhD program in global leadership. "When business come, I'm gon' go handle business," she said. "But when it's time for pleasure, I'm gon' have pleasure. How 'bout that?"

After the season premiere aired, Silky took to Instagram to share how her authentic self has always been repressed by others, and she encouraged her followers to freely live their truth, even if that means being "too much."

"Let people live freely with their authentic selves," she wrote. "Some children are being kicked out their homes because being gay is 'too much.' Some kid is eating themselves away because [of] the way you look at them or the fat joke you cracked. Don't be 'too much.' Let people live." Referring to the accompanying photo, Silky continued, "This is my senior portrait. I was told by teachers, I was doing 'too much' and I needed to tone myself down. We only get one life. I choose to live this one life full of excitement, joy, freedom, unapologetically, but most important, like it is my last day on earth."

Silky's "big personality," as Ariel called it, is reminiscent of last season's Eureka O' Hara, who was also bullied by her castmates for genuinely being herself, be it loud and over-the-top, and was often called out for intentionally overshadowing her peers. And guess what? Eureka made it to the final three.

Whether you love her or you hate her, Silky has the potential to go just as far on Season 11. And despite everyone else's opinion, Ru seems to appreciate "future Dr. Silky"'s unapologetic tendencies, and that opinion is really the only one that matters.