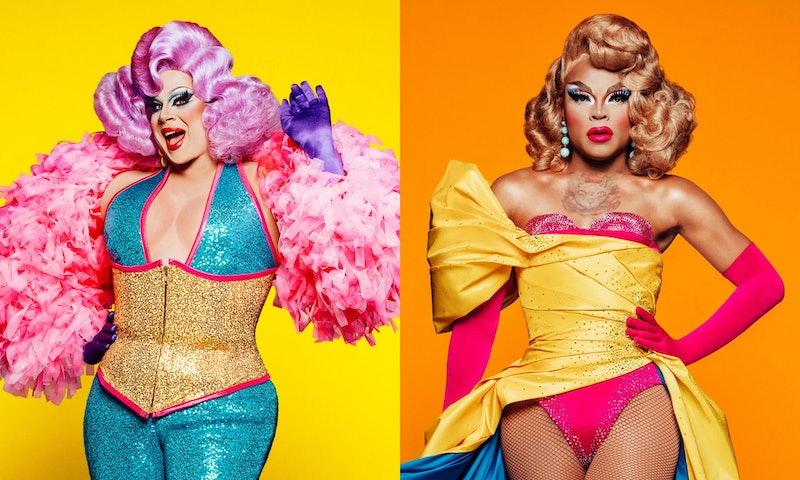 It's getting down to the wire on Season 11 of Drag Race, which means some difficult decisions have to be made. And even though that's the name of the game, Episode 11 left may have left a bad taste in your mouth — especially if you're rooting for Nina West and Miss Vanjie.

The May 9 episode started off on the wrong foot when Ru brought back six of the season's eliminated queens — Soju, Plastique Tiara, Honey Davenport, Ariel Versace, Scarlet Envy, and the most recently eliminated Shuga Cain — to be a part of the maxi-challenge. Thankfully, they weren't there to compete for redemption; they were just makeover subjects. But that doesn't mean they didn't affect the competition.

The eliminated queens were paired off with the remaining ones for the traditional family resemblance challenge, and after their runway walks, Ru asked each of them — eliminated and competing — who they thought should go home. Down the line of 12 girls, seven of them voted for Silky Ganache, and five for Yvie Oddly. In that moment, it seemed obvious who would end up in the bottom two. But Ru had other plans.

Nina West, whose queer pride look with Shuga was too costume-like for the judges, ended up in the bottom after sweeping the competition the week prior. Everyone knows that Drag Race isn't always fair, but Nina's potential should have been enough to keep her safe. Sure, her rainbow ensemble alongside Shuga's pride look was over-the-top, but it was supposed to be. She simply accomplished what she set out to do, and because it wasn't what the judges wanted to see, they punished her for it.

Instead, they saved Yvie Oddly, who is yes, a creative force, but she's flatlining in the competition. The judges said themselves that her partner Scarlet's denim dress looked like a scrappy hand-me-down. It didn't look polished or complete, and she wasn't even wearing the right shoes. At least Nina and Shuga's looks were equally polished from head to toe — they were a balanced team.

Nina had a plan: she wanted their look to be both a nod to her theatre roots (represented by their Kinky Boots thigh-highs) and her drag family's activism (represented by the LGBTQ flag patterns on their garments). But it wasn't "high fashion" enough, so she was sent to the chopping block.

Meanwhile, Yvie's concept was more fashion-forward, but lacked story and identity. Both her and Scarlet's outfits were literally just tattered denim, but they somehow kept her safe. Not to mention, Yvie hasn't nabbed a challenge win since Episode 2 — Nina has two. It was clearly Yvie's time to lip-sync for her life.

On the flip side, Miss Vanjie finally crushed a challenge after hanging on by a thread over the last few weeks, and all of the queens were shocked when she still didn't win. The judges even told her she made them proud and welcomed her back to the competition, but ultimately forked over another win to Brooke Lynn Hytes. It was clear that Vanjie and the rest of the queens were disappointed by the news. And they had the right to be, because Vanjie deserved to win.

After these two curveballs, there really isn't a clear path to the crown. Unlike other reality competition shows, the judges have all of the power and the fans have none — all we can do is watch, this time in disappointment.