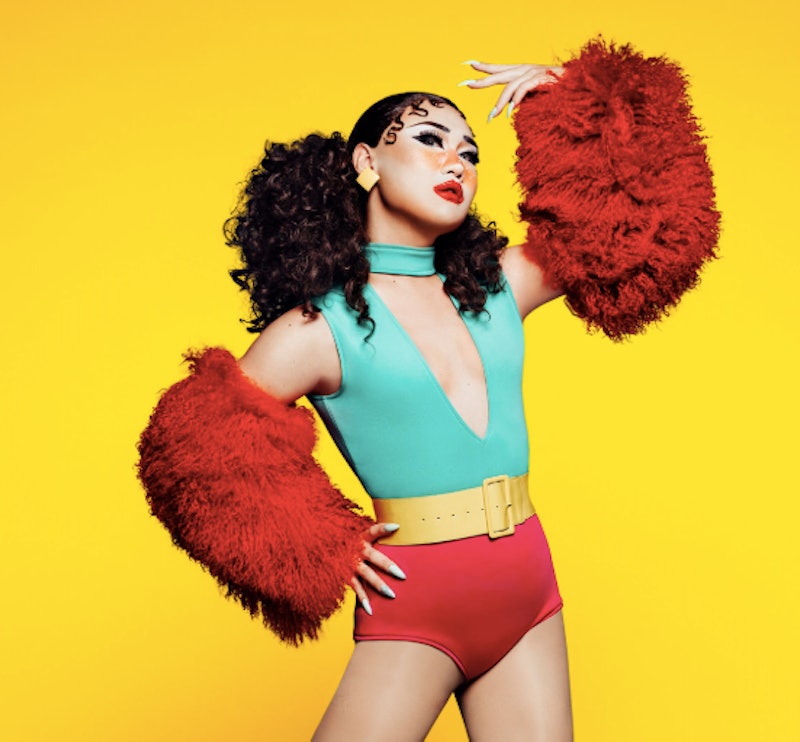 When she received the news confirming her spot on Drag Race, Season 11 queen Soju was beyond surprised. After all, it's uncommon for contestants to make it on the show with their first try. "This was my first year auditioning," she tells Bustle. "So I was like, really shocked. I didn't really think I was gonna make it. I really wanted to get on, but I didn't think I had that much of a chance." Unfortunately, she was eliminated during the first episode, but she says her small stint in Ru's werkroom completely changed her perspective as a fan.

Soju has had a deep love for Drag Race since it began, which is why she started her YouTube show Shot with Soju, which has amassed over 50,000 subscribers since 2016. "I wanted to see more of these drag queens that I looked up to," she says. "But at that time, there wasn't a lot of media out there covering RuPaul's Drag Race … so I was just like, you know what, I'm gonna make my own."

In each episode, Soju interviews a Drag Race contestant while intermittently taking shots of the Korean liquor Soju, hence how she — and her show — got their names (think Drunk History but with drag queens). She also streams live reviews of each new episode.

Now that her personal journey on Drag Race is over, Soju can return to her YouTube series. She says that she plans to cover the rest of Season 11, even though she was a cast member, but that her experience definitely changed her overall approach. "I'm gonna cover the rest of the season but I'm gonna do it a little bit different," she says. "Before, when I was covering it, I wasn't on Drag Race, and they always say that you don't know what it's like unless you're there and experience it firsthand. And a lot of the word choices I used and opinions that I had were really naïve and ignorant, and I'm coming into it with a little bit more knowledge, more education about the show. So it's gonna be a little bit different this year, you guys will have to stay tuned and see."

Some of the other Season 11 queens were shocked to see Soju walk into the werkroom because they saw her as a YouTuber, not a performer. Soju took that response as an opportunity to surprise them. "I'm still a YouTuber and I have no shame in that," she says. "But what they didn't know is that I was still performing at clubs in Chicago, traveling around the world in Korea and Tokyo and performing. So if that's all they knew about me as a YouTube queen, then I think that might've been an advantage for me."

Sadly, Soju didn't get to perform as much as she would've liked. She struggled through the first challenge — a design challenge — and failed to make a structurally sound garment. Last season, a design challenge and a figureless outfit sent Vanessa Vanjie home in Episode 1. Soju aimed to mimic a traditional Korean silhouette with her ballgown-esque dress, but it didn't translate well to the judges — mostly because it was falling apart.

"My downfall was that I didn't sew anything," she says. Her dress was mostly made up of tulle that was tied together in knots. "I do think the judges understood the silhouette after I explained that it's a humble, traditional silhouette. I think the downfall was that it was kind of falling apart, and it wasn't well constructed, and I can understand that. So I have no excuse for that."

Soju says her biggest takeaway from the show is the importance of self-awareness and confidence. "There has to be 100 percent self-awareness on that show," she says. "Because as soon as you're not, you get caught." Even though she the first one to get cut this season, Soji knows that it ultimately helped her become a better drag queen — and a better fan.

More like this
The 'Bachelor In Paradise' Schedule Shifts To 4 Hours Every Week After The Season 8 Premiere
By Brad Witter
Are Brandon & Serene Still Together After 'Bachelor In Paradise'?
By Kadin Burnett
‘RHOSLC’ Star Jen Shah’s Arrest & Legal Drama, Explained
By Brad Witter and Jake Viswanath
Tristan Thompson Proposed To Khloé Kardashian & She Said No
By Jake Viswanath
Get Even More From Bustle — Sign Up For The Newsletter