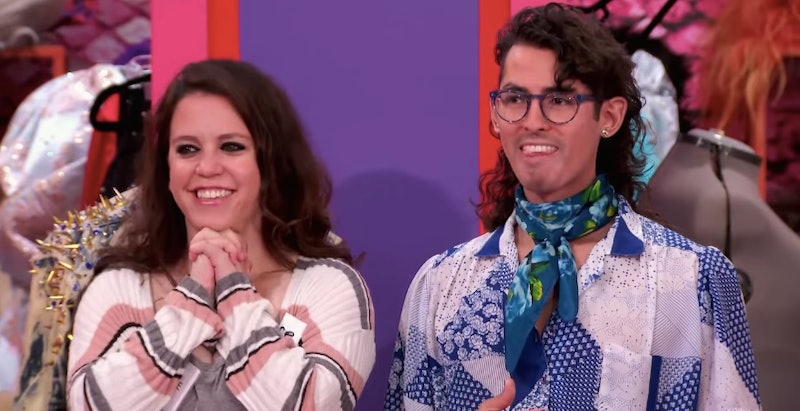 One of the few downsides of watching RuPaul's Drag Race is that amid the strain of competition, the joyful, celebratory nature of drag is sometimes lost. But in the May 1 episode, the show got back to what it's all about.

A spin on the seasonal makeover challenge, Ru surprised six superfans by fulfilling their Drag Race fantasy and giving them their very own drag mothers, aka the Season 12 queens. To hear their nervous laughter when Ru entered the room was moving enough — but the women came out of the experience with so much more. As he Top 6 queens — Jaida Essence Hall, Sherry Pie, Gigi Goode, Heidi N Closet, Jackie Cox, and Crystal Methyd — made them over, Jaida and Bethany ended up in tears, Crystal and Grace shook out their nerves together, and Heidi helped Nicole confidently stand out after blending in for most of her life.

When they all finally walked the runway, there was one more surprise: the superfans got to lip-sync for their lives on the main stage. "Shantay you all stay to slay another day," Ru announced after they finished.

Little did they know, that announcement foreshadowed the real lip-sync battle between the bottom two, Jackie Cox and Heidi N Closet. Rather than working against each other, the two performed "Kill The Lights" by Alex Newell as one unified force — right down to an air kiss from across the stage at the song's end.

It seemed more like a choreographed dance number than an elimination, and Ru took note by using his seasonal double save. That means they both get another week to compete, and more importantly, extra time with their newfound drag daughters, who never stopped cheering from backstage.

More like this
'The Bachelor' 2023 Schedule Differs From Last Season In 1 Key Way
By Grace Wehniainen
Twitter Is Saying The Same Thing About 'Love Island'
By Sophie McEvoy
Everything To Know About 'RHONJ' Season 13
By Brad Witter and Jake Viswanath
This ‘Bachelor’ Spoiler Teases The Dramatic Self-Elimination Of A Fan Favorite
By Grace Wehniainen
Get Even More From Bustle — Sign Up For The Newsletter
From hair trends to relationship advice, our daily newsletter has everything you need to sound like a person who’s on TikTok, even if you aren’t.