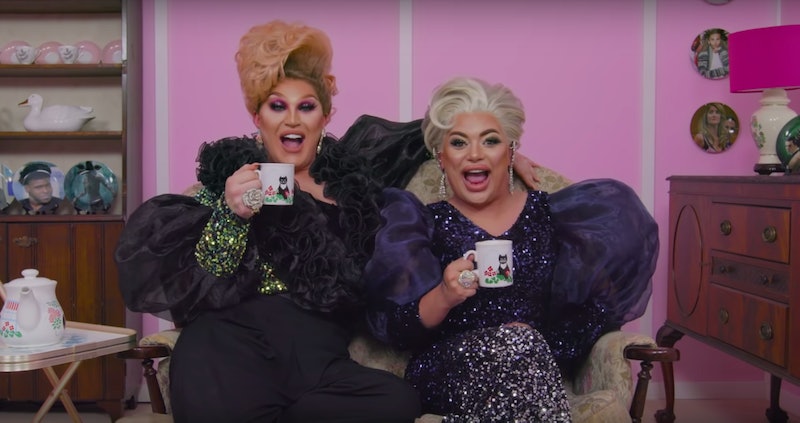 Although there's still a long way to go before RuPaul's Drag Race UK returns for a second series, fans now have plenty to look forward to in the meantime, because two of the biggest names to emerge from the show's first run have reunited for a brand new spin-off. Mirroring the success of Stateside queens Trixie Mattel and Katya, Drag Race UK stars The Vivienne and Baga Chipz have landed their own Netflix series, and to quote queen Baga herself, your next streaming marathon just got "much better."

As Digital Spy reports, the drag superstars now front the UK edition of I Like To Watch, during which Baga and Viv react to some of Netflix's most popular shows. Think Gogglebox meets Drag Race, and thats pretty much what you can expect from this fabulous new web series.

In the debut episode of I Like To Watch UK, which is now available to watch on Youtube, the British queens offer their hilariously unfiltered take on Netflix's hit comedy-drama Sex Education — and if the original U.S. version offers any indication, fans of the duo are in for a real treat.

This isn't the first time Baga and The Vivienne have linked up for a project, having previously fronted the spoof morning chat show Morning T&T on Wow Presents Plus, which saw the Drag Race finalists reprise their legendary Snatch Game personas.

The web series' arrival is likely to soften the blow of recent news surrounding production on the second series of RuPaul's Drag Race UK — which has been suspended due to the ongoing coronavirus pandemic. As the Metro reports, a BBC spokesperson confirmed that "after much consideration," filming of the upcoming season has been "temporarily" paused.

"We will continue to review all productions on a case by case basis and will continue to follow the latest news and advice from the Foreign Office, World Health Organisation and Public Health England," the BBC spokesperson concluded.