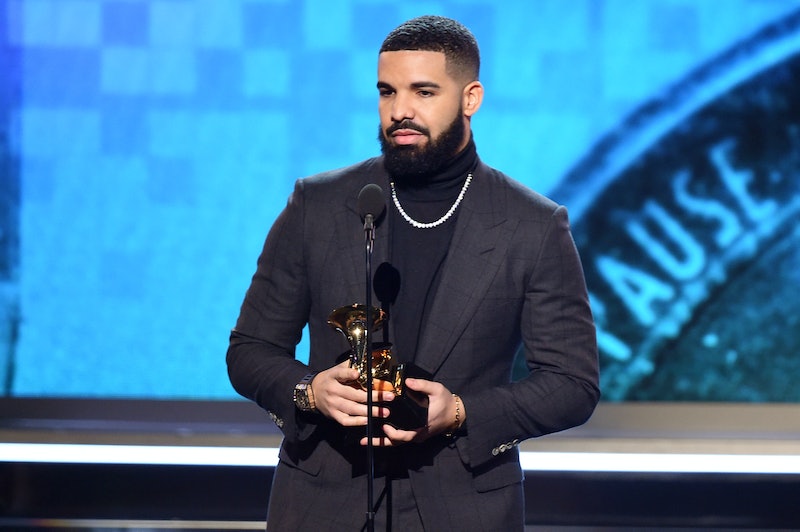 This year's Grammys were filled with moments that hip-hop artists (and fans) can celebrate. Cardi B became the first solo female rapper to win Best Rap Album. Donald Glover (aka Childish Gambino) was the first hip-hop artist to win Song of the Year for his track "This Is America," which also won Record of the Year. But it’s Drake's win for Best Rap Song that stands out most, because it perfectly exemplifies the fraught relationship hip-hop still has with the Grammys, despite these notable successes.

Until Drake won for "God's Plan" and walked onto the stage, it wasn't clear that he was even in attendance at the show. The artist didn't appear at the last two Grammy ceremonies and didn’t even submit More Life for awards consideration last year, so imagine my and many other fans' surprise when he came from backstage to accept this award. It makes sense, then, that his acceptance speech offered a pointed criticism of the Recording Academy, which has honored him three times previously, but never in major categories. It's something that has apparently always bothered Drake, who once said that he wondered if the reason why "Hotline Bling" won Best Rap song was because he's black and therefore they assume he's just a rapper.

With another win for Best Rap Song, he used his speech to seemingly criticize the Grammys overall for their rigid categorization of artists. "This is a business where sometimes it’s up to a bunch of people that might not understand what a mixed-race kid from Canada has to say or a fly Spanish girl from New York, or a brother from Houston," he said. "But look, the point is, you’ve already won if you have people who are singing your songs word for word... you don’t need this right here. I promise you that."

With that, Drake's speech was cut short, not an especially good look for an awards show whose outgoing president Neil Portnow stood on stage preaching about diversity and inclusion and all the strides the Grammys were making — a year after he told women they have to "step up" if they wanted to actually win. The cut to commercial break was bad optics for a show that has historically overlooked artists of color, specifically hip-hop artists. A problem they know they have since in an interview with The New York Times before this year's show, producer Ken Ehrlich said, “The fact of the matter is, we continue to have a problem in the hip-hop world.”

So the point of Drake's speech, before he was cut off, was apt because while it was an honor to win, the Grammys have some serious work to do to improve. Just consider the fact that if Drake, Kendrick Lamar, or Cardi B had taken home the Album of the Year, which went to Kacey Musgraves, they would have been the first hip-hop artists to win since Outkast did just that in 2004 for Speakerboxxx/The Love Below despite hip-hop being one of the most popular kind of music.

That’s why it’s hard not to feel like all the talk of inclusion in the telecast was a bit of a facade — behind the scenes, the Grammys have plenty of work to do when it comes to representation. There have been some positive steps taken, like the recently launched Task Force on Diversity & Inclusion meant to help make sure winners better represent the music world, and the world in general. The Grammys also expanded the number of nominees in four major categories — Best New Artist, Record Of The Year, Song of the Year, and Album of the Year — from five to eight nominees, in hopes of giving more opportunities to performers, who are too often overlooked.

Yet while these changes may have helped earn some love for hip-hop and artists of color, they don't fully solve some of the deeper problems the Grammys have with representation. Often, wins for black artists and others of color are relegated to the genre-specific categories that don’t even air during the live telecast.

According to a tweet from Essence, rappers even boycotted the Grammys 30 years ago because the show refused to televise the award for Best Rap Performance. In 2019, two rap awards were given out on the main broadcast, but rappers are still boycotting the show in hopes of getting fair representation. This new wave of protest is a sign to music fans that their favorite artists don’t feel the Grammys represent them or even truly understands their diversity problem, despite a long history of protest.

And as the Atlantic pointed out, changes to expand the number of nominees in major categories might not fix some of this distrust from black artists. “This group, historically, is among the most-nominated in any given year,” John Vilanova at the Atlantic explained, “though General Field wins are few and far between.” Black artists can sell records, rule the charts, and get critical acclaim (cough, Beyoncé, who's somehow never won Album of the Year), but they typically haven’t been honored for those achievements in the same way as white artists.

Yet, as Entertainment Weekly pointed out in 2017, black artists are asked to perform at the show regardless, because they bring in viewers. “If [artists of color are] not going to be given the respect from this organization, then why even show up and entertain?” pop culture expert and SiriusXM host Bevy Smith told EW two years ago. And the Recording Academy is now seeing this in major nominees like Drake, Kendrick, and Donald Glover all turning down the opportunity to perform. Childish Gambino, who won four awards, two of which were on the broadcast, didn't even show up to the show. And Lamar, who won for Best Rap Performance, also stayed home this year.

By ignoring these artists, the Grammys are starting to lose them, which is clearly a problem for a show that calls itself the biggest night in music. Without music’s biggest stars, there’s not much reason for fans to care about the Grammys, which are trying to stay culturally relevant as Drake seemingly tells fans they really aren't.

The trend of no-shows is spreading fast, too. Winners like Beyoncé and Jay-Z, who has boycotted before, weren’t there, along with other big stars like Rihanna, Kanye West, Justin Bieber, and Taylor Swift, just to name a few. Ariana Grande decided not to perform or even attend the show after she claimed on Twitter her “creativity & self-expression was stifled by” Grammy producer Ken Ehrlich.

The fact that there were two different hip-hop firsts at this year's awards is a sign that change is happening, even if it's taken too long to come. But, to win back the trust of artists of color, the Recording Academy will have to show they are committed to actual progress and convince artists that they understand their concerns and are really listening. They might want to start by not cutting off their speeches.

More like this
At 28, Melanie C Was Falling In Love & Reclaiming Her Confidence
By Olivia-Anne Cleary
Tove Lo Is Still Crying On The Dance Floor
By Ivana Rihter
Everything To Know About Taylor Swift’s 10th Studio Album, 'Midnights'
By Grace Wehniainen and Jake Viswanath
Everything You Need To Know About ‘Black Panther: Wakanda Forever’
By Bustle Editors
Get Even More From Bustle — Sign Up For The Newsletter