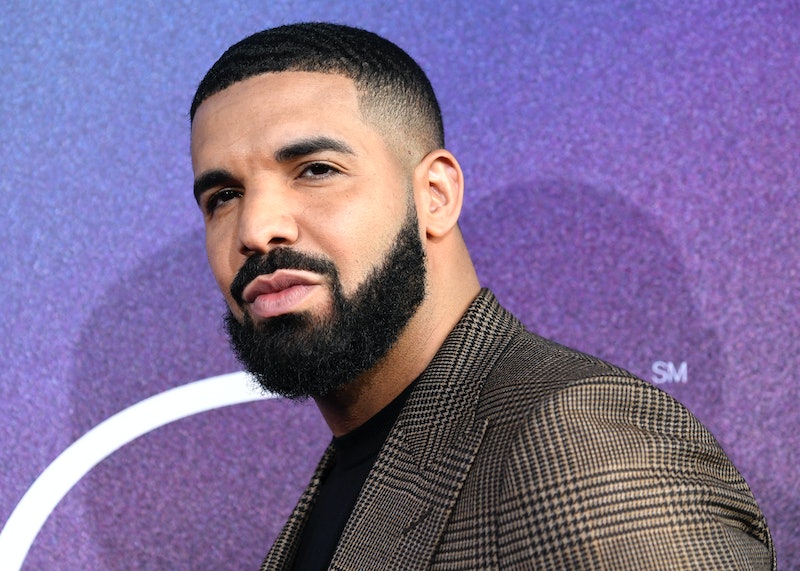 Before he was a chart-topping rapper and an international superstar, Drake was best know for playing Jimmy Brooks on Degrassi: The Next Generation. While many years have passed since his last time acting on the teen drama, it still has a place in his heart and on his mind, as Drake's Degrassi throwback Instagram shows his TV days still haunt him — in the wildest of places.

On Thursday, Sep. 12, Drake shared a photo of himself looking pensively at the floor while on a night out on Instagram, where he revealed what's really on his mind in those seemingly-glamorous moments. "Sometimes when I am drunk and bored in the club I stare down and see Degrassi scripts....no rap," the rapper captioned the snapshot. As proof, Drake also shared a throwback photo of himself at a table read for Degrassi, where can be seen smiling and looking down at the table.

As it turns out, Drake isn't the only former Degrassi star who is still haunted by his time on the show; two of his former costars commented on the post, revealing that they, too, often think about old scripts. Lauren Collins, who played Paige, joked, "You too?" in the comments, while Cassie Steele, who played Manny Santos, added, "Same." Once a Degrassi High student, always a Degrassi High student.

Drake has often found ways to poke fun at his teen drama past, including reprising his role as Jimmy Brooks and staging a giant Degrassi reunion for the "I'm Upset" music video. In the clip, Drake and his former costars party in the Degrassi High gym, ride around in fancy cars and reference some of the show's most famous plot lines, like having Rick (Ephraim Ellis) get chased down by some of Drake's entourage as revenge for shooting Jimmy.

In an interview with TMZ shortly after the video went viral, Ellis and Shane Kippel — who played Jimmy's best friend, Spinner — revealed that the Degrassi reunion was entirely Drake's idea. Explaining that it was filmed just a week before it was released, Kippel said, "Drake was planning to have a big reunion as the concept of his video."

A few days before the shoot, Kippel said, he got an email pitching the idea that he and Drake would be "spending some one on one time, driving around in fancy cars, getting fitted for expensive suits and then show up and crash the party." Ellis added that filming the video "really felt like a real high school reunion" because so many of the cast members hadn't seen each other in years.

As delightful as Drake's love of Degrassi is, it's somewhat surprising that he has such warm feelings for the Canadian show, as he revealed back in 2015 that he was actually fired from Degrassi due to his burgeoning music career. "That was part of the reason I was kicked off the show,” Drake told W Magazine at the time.

"Back then, I’d spend a full day on set and then go to the studio to make music until 4 or 5 a.m.," he recalled. "I’d sleep in my dressing room and then be in front of the cameras again by 9 a.m. Eventually, they realized I was juggling two professions and told me I had to choose. I chose this life."

Drake may have left Degrassi in order to focus on his music career, but it's clear based on his videos and his social media that he'll still do "whatever it takes" in order to keep it in everyone's mind.

More like this
Britney Spears Shares & Deletes Photos Of Justin Timberlake From 22 Years Ago
By Jake Viswanath
Man Meets Politics: ‘Boy Meets World’ Star Ben Savage Is Running For Congress
By Jake Viswanath
'That '90s Show' Star Callie Haverda Got Advice From Mila Kunis & Ashton Kutcher
By Brad Witter
'Friends' Star Maggie Wheeler Offers Support To Matthew Perry After Reading His Memoir
By Alyssa Lapid
Get Even More From Bustle — Sign Up For The Newsletter
From hair trends to relationship advice, our daily newsletter has everything you need to sound like a person who’s on TikTok, even if you aren’t.