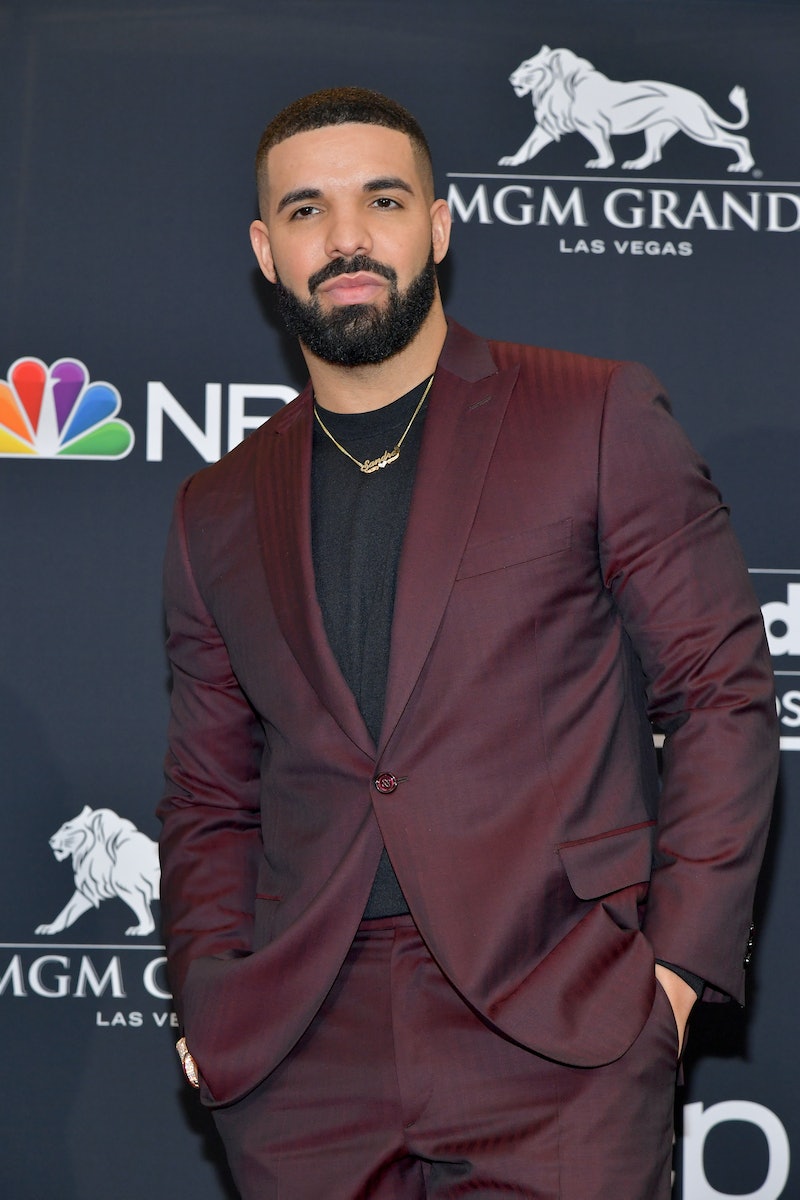 Rapper and Toronto Raptors super fan Drake celebrated Father's Day with some artwork, that may be from his son Adonis. The musician did not actually confirm that Adonis was the artist of the painting, but he did caption his June 16 Instagram post with "Happy Father's Day" and a blue heart emoji. The painting spells out the word "Papa" with colorful dots on brown paper. So, either it's from Adonis, or Drake has gotten creative with his Father's Day celebrations.

If the painting is from Adonis, it wouldn't be the first time Drake's son has gifted him with some artwork. The rapper's Instagram followers already know that he is a big fan of his son's paintings. In December 2018, Drake shared a framed finger painting with the sweet caption: "Adonis > Picasso don’t @ me." The new painting does seem reminiscent of the baby's previous work.

For the most part, Drake has been very private about his son's life. In May 2018, rapper Pusha T released a diss track aimed at Drake called "The Story of Adidon." Among other things, Pusha T claimed Drake is a father.

Pusha T rapped, "You are hiding a child, let that boy come home." He even mentioned the baby's name in another verse:

Though he didn't respond to this directly at the time, but Drake did confirm that he has a son in several tracks on his June 2018 album Scorpion. In the song "8 Out of 10," Drake rapped, "Kiss my son on the forehead then kiss your ass goodbye / As luck would have it I've settled into my role as the good guy." And on the track "Emotionless," Drake explained why he keeps his son out of the spotlight. He rapped, "I wasn't hiding my kid from the world, I was hiding the world from my kid."

Aside from confirming that he has a son on the album Scorpion, Drake elaborated further in an interview with LeBron James on the HBO show The Shop back in October 2018. According to Vulture, Drake discussed conceiving a child with a woman he was never in a romantic relationship with and how it made him reflect on his own childhood with his parents who divorced.

The Degrassi: Next Generation alum began "I was really hard on my parents for giving me a childhood that I had to wrap my mind around, as I grew." Drake continued:

"I, multiple times, sort of suggested that they could have done a better job at co-parenting, sticking together, not being so divided, and of course, as life takes shape and teaches you your own lessons, I end up in this situation, where I don't have the fairy tale."

In the same interview, the rapper insisted that he was committed to having a good co-parenting relationship with his ex. "I do want to be able to explain to my son what happened, but I don't have any desire for him to not love his mother," he said. "I don't ever want to the world to be angry at his mother. We found ourselves in a situation and we're both equally responsible and now I'm just excited to be a father."

Drake's path to fatherhood may have been unplanned an unconventional, but if his son's artwork is anything to go on, it looks like he's doing his very best.