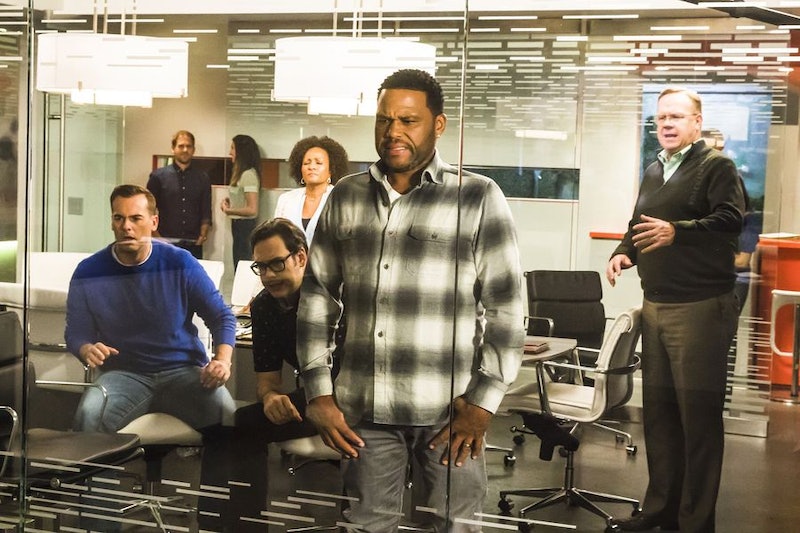 When black-ish is on a roll, the show's writers simply don't take weeks off, and the series goes from tackling election fatigue to another, no less important issue: how to preserve one's mental health. In response to Bow's weekly session with a psychologist, Dre offers an established trope: the idea that Black people don't go to therapy. And while Dre's angry outbursts are certainly used for entertaining effect at the end of episodes, the show pulls a twist and calls out how Dre's yelling might be entertaining for a character, but can't be a healthy coping mechanism. After all, with all the vein-popping screaming matches that this man gets into, a premature heart attack can't be too far behind.

Getting to talk out issues help Bow deal with her more repressed anger and stress. Having to swallow issues like sexism at work or even dealing with a mother-in-law like Ruby. And after just a single session with Bow's analyst, Dre is able to admit that he has some serious issues tied to his upbringing that has made him quick to anger. So he takes the chance to borrow his wife's weekly appointments, as he hopes to deal with some of his incredible stress.

What I love about the episode is that while Dre struggles with the idea of being the type of person who goes to therapy, he's quick to realize that it actually works for him to try a little bit of introspection. And it makes sense, right? Dre, deep down, is a softie who loves to talk about his feelings, and only lashes out when he gets hurt. There are as many scenes of him fighting back tears as there are scenes where he verbally berates someone. Turns out, therapy sessions can unlock some realizations about his past, and mental health is treated as important and valuable for the Black community.

Ultimately, the couple find coping mechanisms that work best for them. Bow needs the weekly venting session that allows her to process her feelings, while Dre needs to balance an increased awareness of why he's so quick to go off without indulging himself every moment. Therapy isn't demonized — everyone should do a little soul-searching — but as Johan's scam life coaching shows, there is such a thing as being too invested in self-improvement. Both Johnsons come away feeling a little more well-adjusted, and maybe the episode busted some stereotypes about therapy being a white, upper middle class-only thing.

More like this
'It’s A Sin's Real-Life Jill Has An Important Message About Monkeypox
By Sam Ramsden
Ashton Kutcher Opens Up About His Battle With Rare Autoimmune Disorder
By Radhika Menon
Dr. Anna Pou Is Still Practicing Medicine After Facing Murder Charges
By Brad Witter
‘Stranger Things’ Stan Megan Thee Stallion Grilled Natalia Dyer About Nancy & Steve
By Brad Witter
Get Even More From Bustle — Sign Up For The Newsletter