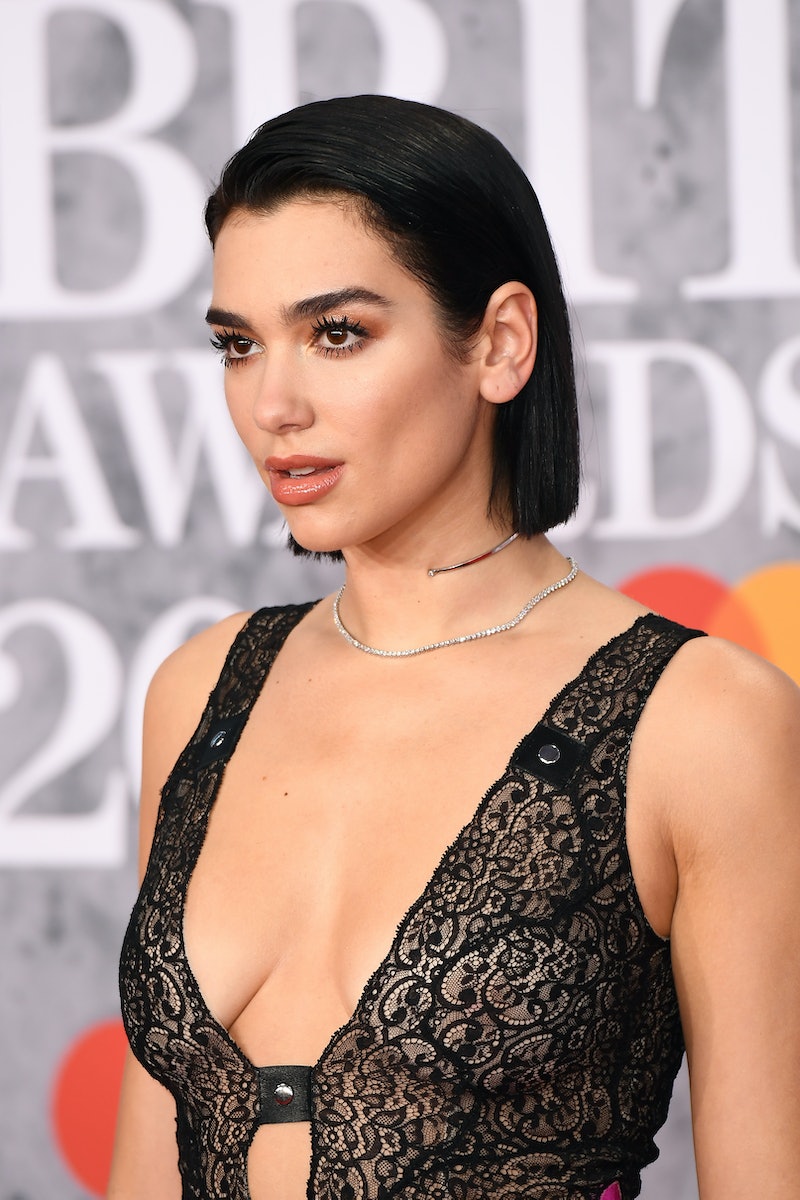 When it comes to bowling, the uniforms typically involved aren't exactly runway-ready. But Dua Lipa went bowling in a feathered cocktail dress and five-inch stilettos, proving there is no such thing as overdressing. When folks hit the lanes, there is usually a tried and true uniform involved. If you're part of a league you show up with slogan shirts and a bowling ball bag. If you're just hitting the lanes with friends on a weekend, jeans and rented patchwork bowling shoes are involved. But even though those looks are expected, they aren't exactly on the glam end of things, fashion-wise. Lipa decided to reinvent the formula with her own bowling outing.

The British pop star showed up to the lanes in honor of her chef boyfriend, Isaac Carew's, birthday. According to Page Six, the group celebrated Carew by stepping out to The Croc bowling alley in London, and Lipa dressed for the occasion. She wore a hot pink cocktail gown that was completely covered in feathers. The cap sleeve number was cinched at the waist with a black chunky belt, and the feathers swayed as Lipa strut down the bowling lane. Lipa posted a video of her ensemble onto Instagram, where followers got a peek at how the artist spent her downtime with friends. In the video, Lipa picked up a blue bowling ball, did a runway spin for the camera, and posed a platinum platform heel onto the bowling ball rack before heading down to take her turn.

The platforms are from Aquazzura, and they clock in at a budget-breaking $707. But even more impressive than the price tag is the heels' height: a whopping 5.5 inches.

Lipa threw the ball down the lane, walking back towards the camera in a strut that was worthy of Naomi Campbell. The whole thing felt like it came from the pages of Vogue, and one could imagine that Anna Wintour would approve.

Judging by the photos posted onto Lipa's Instagram, the bowling alley wasn't the only stop that night. A few hours later, Lipa posted a carousal of photos that gave fans a better look at the cocktail gown. The birthday party moved on to a bar, and Lipa took a few magazine-worthy shots on a bench, posing in her playful get-up.

This isn't the first time that Lipa donned a feather mini dress. Just three weeks ago, on March 5, another feather dress made its way onto the artist's Instagram. Lipa threw her dad a surprise 50 birthday party, and wore a bright green strapless mini.

The cocktail dress was from the designer Attico, and it clocked in at $4,791. She wore the same Aquazzura platform heels with the look, and accented the green dress with a bubblegum pink handbag.

The top handle, envelope front purse was from designer Stalvey, and cost more than the dress. The lilac purse clocked in at $4,800.

Whether Lipa is wearing a feathery tube top dress at family gatherings or tearing up a bowling lane in thousand dollar frocks, she shows there is no such thing as overdressing. It's a good lesson to keep in mind.