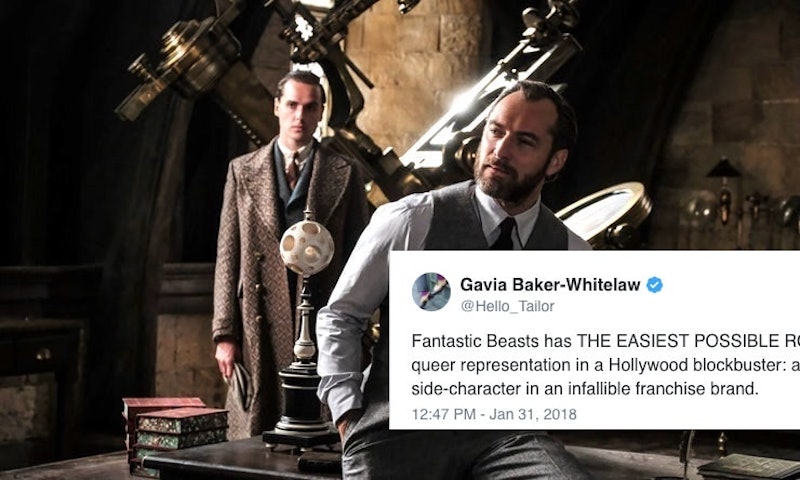 When Fantastic Beasts: The Crimes of Grindelwald hits theaters this fall, don't expect romantic sparks to fly between two of the central male characters. The sequel's director David Yates told Entertainment Weekly that Jude Law's young Dumbledore won't be "explicitly" gay. The news is disappointing to some fans, who hoped that the Harry Potter prequel series would make the headmaster's romance with dark wizard Gellert Grindelwald (played in the movie by Johnny Depp) canon in the film universe.

Update: On Jan. 31, J.K. Rowling tweeted a response to the backlash from fans — though not the response they may have wanted. "Being sent abuse about an interview that didn't involve me, about a screenplay I wrote but which none of the angry people have read, which is part of a five-movie series that's only one instalment [sic] in, is obviously tons of fun," she wrote. "But you know what's even *more* fun?" This was accompanied by a gif of Lil Yachty with the word "MUTE" on it

Earlier: Though Yates said that Dumbledore's sexuality would not be addressed in the film, he explained that he thought fans would be aware of the Hogwarts professor's romantic history regardless. He explained,

"I think all the fans are aware of that. [Dumbledore] had a very intense relationship with Grindelwald when they were young men. They fell in love with each other’s ideas, and ideology and each other.”

In the Harry Potter books, the relationship between Dumbledore and Grindelwald was only loosely defined. Dumbledore tells Harry in Harry Potter and the Deathly Hallows that he was friends with the idealistic young man until he came to terms with the reality of Grindelwald's world vision, which would place muggles under the control of witches and wizards. Dumbledore defeated Grindelwald in a famous duel in 1945, nearly half a century before the events in the book series. Dumbledore admitted, "You cannot imagine how his ideas caught me, Harry, inflamed me. Muggles forced into subservience. We wizards triumphant. Grindelwald and I, the glorious young leaders of the revolution."

Though Dumbledore did not speak to a more-than-friends past — already a point of contention among some readers — that could be explained by the fact that the narrative followed Harry's perspective closely. What teenager wants to hear about their elderly headmaster's former lovers? Inappropriate. Rowling confirmed that there was a romance during an appearance at Carnegie Hall in 2007. According to Time, she told fans, "I always thought of Dumbledore as gay. Dumbledore fell in love with Grindelwald, and that added to his horror when Grindelwald showed himself to be what he was."

Many fans were hopeful that with the Fantastic Beasts prequel series would give viewers a glimpse into that past — how Dumbledore came to fall in love with Grindelwald and their connection. As Entertainment Weekly pointed out, Rowling at a press junket previously hinted that this dream might just become a reality. She said of Dumbledore in Fantastic Beasts:

"You will see Dumbledore as a younger man and quite a troubled man — he wasn’t always the sage…We’ll see him at that formative period of his life. As far as his sexuality is concerned … watch this space."

For LGBTQ fans and their allies, the news that Dumbledore will not be presented officially as queer seems like a missed opportunity. A GLAAD study from 2017 found that of 125 major releases in 2016, only 18.4 percent had LGBT characters. This lack of representation can be internalized by young fans, some of whom have complained about the lack of characters they see like themselves in media. To have a character who is seen as incredibly powerful, intelligent, and good, like Dumbledore presented as a homosexual man would be a positive example of representation. Furthermore, overlooking Dumbledore's sexuality seems particularly short-sighted as other big action-fantasy franchises look to diversify: In Star Trek Beyond Sulu is openly gay and Marvel superhero Deadpool is pansexual.

Many took to Twitter to air their criticism of the movie's choice to keep Dumbledore closeted. Some questioned why the creator would skip this opportunity for queer representation.

Others called Yates a coward for his decision.

There were also fans who also blamed Rowling.

Some said they wouldn't be going to see the movie at all.

Others voiced their disbelief.

Still, some fans offered their own fantasy version of the movie.

It is likely too late for Yates and the movie to backtrack now, but it is disappointing that the franchise overlooked Dumbledore's sexuality. Hopefully in one of the other planned sequels, we'll get a glimpse into young Dumbledore's love life. Either way, Fantastic Beasts: The Crimes of Grindelwald will hit theaters on Nov. 16.