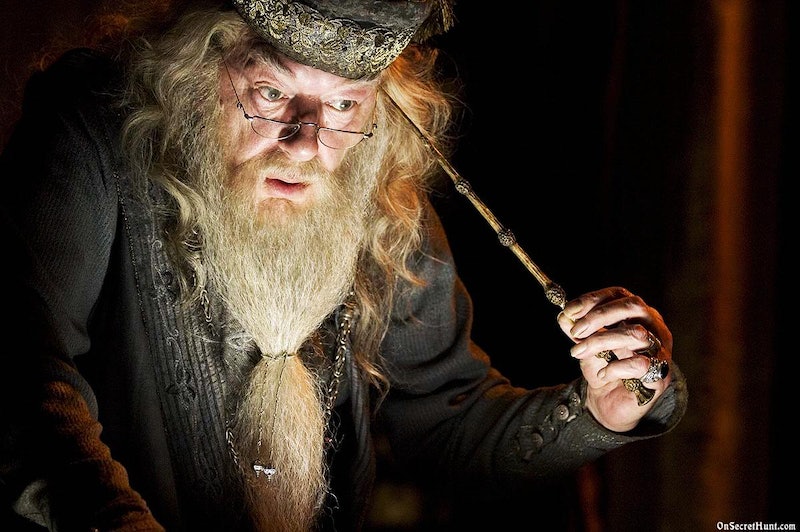 Ever since J.K. Rowling revealed that Albus Dumbledore is gay and had a romantic relationship with future dark wizard Gellert Grindelwald, fans have been hoping to see the character's sexuality actually become canon. It's one thing to talk about Dumbledore's love life in interviews and press conferences — and it's entirely another to actually put it in the text or on the screen. Well, the author may finally be about to do just that, if rumors about the film adaptation of Fantastic Beasts And Where To Find Them and its sequels are any indication. Indeed, Dumbledore may have a same-sex romance in Fantastic Beasts 2 , and that's pretty much the best news ever.

Although Dumbledore himself won't appear in the first installment of the Fantastic Beasts franchise, it was recently confirmed that Johnny Depp has a role in the upcoming sequel as Grindelwald. This will lead to an expanded role for the actor in the sequels, and casting is currently underway for the role of his friend/lover/enemy Albus. At a press conference for Fantastic Beasts held in New York City on Thursday, author Rowling (who is also personally writing the screenplays for all five films) was asked about how Dumbledore and Grindelwald's relationship will play out onscreen.

"I can't tell you everything I would like to say," the writer told the audience, "but this is obviously a five-part story, so there's lots to unpack in that relationship. I will say that we see Dumbledore as a younger man and quite a troubled man because he wasn't always the sage. We'll see him in what I think were the formative years of his life." The word "formative" certainly seems to imply that we will see a younger Dumbledore struggling with his feelings for Grindelwald. But "as far as his sexuality is concerned," Rowling stopped just short of confirming that it will be portrayed explicitly — rather than just hinted at, as in the books.

But before you go get too excited about the idea of watching a teenage Albus and Gellert take their first awkward steps into romance, remember when the Fantastic Beasts films take place: in the 1920s, a couple of decades after the climactic events of their fight at Godric's Hollow that drove a wedge between the former BFFs. According to Harry Potter lore, that event transpired in 1899; shortly thereafter, Dumbledore became the professor of Transfiguration at Hogwarts and he taught Newt Scamander through his expulsion in the 1910s. The first movie takes place well after all of those events, which means that — even if the films acknowledge that a relationship once existed between Dumbledore and Grindelwald — it will already be a thing of the past.

However, there is plenty of conflict left between the two powerful wizards, as Grindelwald would continue amassing a powerful army, acquiring the Elder Wand in the process, until 1945 when Dumbledore was finally forced to face him and defeated his former lover in a legendary duel. As the movies explore this tumultuous relationship, there's always a chance fans may get flashbacks to their childhood at Godric's Hollow, providing a glimpse at the bygone days of their budding romance.

Whether we actually see their relationship in the past or are simply informed of it in the present, I just hope the love between the two wizards is made text — and not just subtext. It would certainly be a first for such a high-profile, high-budget Hollywood blockbuster to feature two gay characters in such central roles. Some franchises have flirted with it — James Bond's innuendo in Skyfall, Wade Wilson's experiments in the boudoir in Deadpool, the charged looks between Finn and Poe in The Force Awakens, Steve and Bucky's long-simmering bromance in Captain America — but very few have actually "gone there." (And it's small wonder why; look at the backlash Star Trek Beyond received over its innocuous acknowledgment of Sulu's sexuality.)

It would be a huge mistake for the Fantastic Beasts franchise to explore this complex period in Dumbledore's history and not make reference to his romantic relationship with Grindelwald. I have complete faith that Rowling will do the right thing and help Hollywood take a huge step forward by giving her LGBT fans some much-needed representation on the big screen. We'll find out when Fantastic Beasts 2 hits theaters in November 2018.

More like this
Alan Rickman's Diary Reveals Why He Considered Leaving 'Harry Potter'
By Darshita Goyal
This Episode 6 Moment Foreshadows Viserys' Fate On 'House Of The Dragon'
By Grace Wehniainen
'The Distant Echo’s Ending Mirrors 'Karen Pirie' In One Crucial Way
By Catharina Cheung
Nicola Coughlan Shared A Lady Whistledown Excerpt From ‘Bridgerton’ Season 3
By Grace Wehniainen, Alyssa Lapid and Sam Ramsden
Get Even More From Bustle — Sign Up For The Newsletter