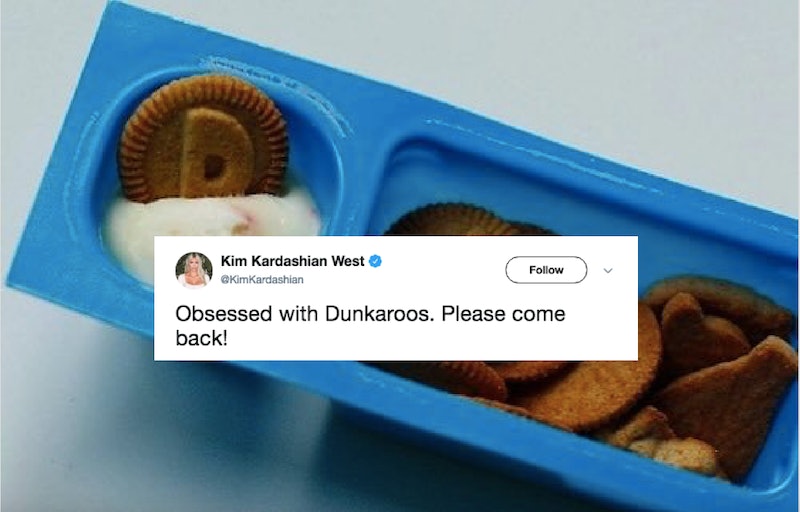 There are a lot of treats from my childhood I miss eating on a regular basis. Gushers were a particular favorite of mine, as were Fruit By the Foot, and I have the adult cavities to prove it. But the best sweet snacks were Dunkaroos, delectable little cookies paired with frosting you could dunk them into. Tragically, manufacturer Betty Crocker stopped making Dunkaroos in the United States in 2012, but one Twitter user's viral tweet wants to bring Dunkaroos BACK. Social media has some serious upsides.

Update: A spokesperson from General Mills has issued a statement on the viral tweet: "We love hearing from fans of Dunkaroos. Please continue to share your thoughts with us. But we need to let you know we never set a number of retweets for a return of Dunkaroos, as you may have seen in a fake direct message screenshot. At this time, we don’t have anything to announce."

Earlier: On Tuesday, Twitter user @_LukeKellly claimed to send Betty Crocker a Direct Message asking how many retweets it would take to bring Dunkaroos back. According to the screenshot, Betty Crocker's wrote "150,000," and thus a viral tweet was born. @_LukeKellly posted a screen shot of the DM, along with photos of Dunkaroos in all their glory, in case folks needed to remember why it's so important we get these babies back on store shelves. "Let's make this happen," he tweeted alongside the photos. And hoo boy did we.

It turns out quite a few people want to resurrect Dunkaroos, and by Friday morning, @_LukeKellly had 187,000 retweets, which clearly means Betty Crocker should start making Dunkaroos in the United States again. SEE HOW BADLY WE WANT THIS???

In fact, Dunkaroos are so beloved and missed that some *CELEBRITIES* took up the mantle for @_LukeKellly's cause. For instance:

(Internet snoopage also suggests Chrissy Teigen got in a Dunkaroo tweet of her own, but she may have deleted it, WHYYYY.)

It's unclear whether Dunkaroos will actually rise up from the ashes, and if they do, we will truly understand the power of virality. America's children deserve the chance to eat frosting right out of a plastic cookie container, like their parents before them, even if they too end up riddled with rotting teeth like mine. What would dentists even do without the destructive power of '90s snacks?

Of course, if you're in desperate need of Dunkaroos, it is possible to get your hands on them. Online retailers like Amazon and Buffalo Sponge Candy still sell Dunkaroos, if you feel like keeping a cardboard box with a six month supply hidden under your bed. There was also a time in which smuggling Dunkaroos in from Canada was de rigueur. In fact, General Mills briefly championed such illegal activity, encouraging Dunkaroo enthusiasts in both the States and the Great White North to cross-border shop so everyone got to enjoy Dunkaroos for, um, a lot more money than they were worth, TBH. It appears that practice is no longer hawked by General Mills, though I'm sure you can stuff some wares from Atlantic Superstore in your backpack next time you're in Justin Trudeauland.

So, that's the deal with IRL Dunkaroos. It's also possible to make your own Dunkaroos at home (recipe here), though admittedly they don't taste quite the same without that plastic wrap flavor. Walmart is also selling their own knockoff Dunkaroo snack, dubbed "Dunk 'N Crunch." Like Dunkaroos, these are little plastic containers of cookies and frosting, that you can dunk at will. Allegedly, these are just as good as the OG Dunkaroo packs, but I'm not sold yet.

Of course, even if Betty Crocker does start making Dunkaroos again, there are still a slew of '90s snacks and cereals I'm dying to see back on the market. These include: French Toast Crunch, Doritos 3D, Oreo Os, Shark Bites, and my personal favorite, Rice Krispie Treats Cereal. The latter was basically just broken up Rice Krispie Treats stuffed in a cereal box, and though you were supposed to put them in a bowl and pour milk over them, I spent many happy hours eating the crumbled treats right out of the box. Ah, to be young.

More like this
The Best Memes & Tweets About The Discontinuation Of The Choco Taco
By Alexis Morillo
On TikTok, A ‘Snackle Box’ Is The Best Way To Pack Charcuterie On-The-Go
By Meguire Hennes
I Tried The $20 TikTok Viral Oishii Strawberries — Here's What I Thought
By Sophie Hanson
Trust Me, Pickle Martinis Are The New It Drink Of The Season
By Emma Carey
Get Even More From Bustle — Sign Up For The Newsletter