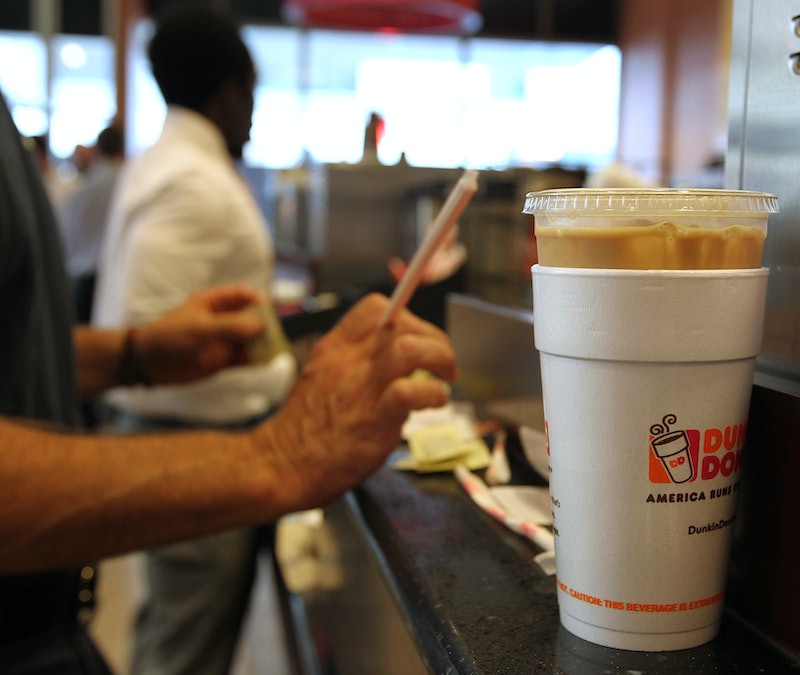 After announcing that it would make this change back in 2018, Dunkin’ is finally doing away with its Styrofoam cups. Yes, the iconic cup is useful for not scalding your fingers while carrying your oversized hot chocolate while also balancing two dozen doughnuts for your English students (or maybe that’s just me). But given that Styrofoam is non-biodegradable and therefore damaging to the environment, a lot of states have been banned this material. To keep ahead of that curve, Dunkin’ is replacing its Styrofoam cups with double-walled paper versions, Eater reports.

Dunkin' is planning replace its foam cups in New England stores by Dec. 1. When Dunkin' originally announced the change in February 2018, the company said in a statement on its website that it plans to bring new paper cups across its franchise “with a targeted completion date of 2020.” The double-walled paper cups being brought in to replace the old cups are made with paperboard that’s been certified by the Sustainable Forestry Initiative Standard, a sustainability organization working to unite forest-based conservation with community-based environmental plans.

According to Dunkin’, this move to keep non-biodegradable materials out of landfills is just one of several environmental initiatives the company has been working on. Dunkin’ has also joined the Sustainable Coffee Challenge, a project working towards making coffee the world's first sustainable agriculture project; is working on eliminating artificial dyes from its menu; and building more energy-efficient restaurants.

Still, the loss of the foam cups may be bittersweet for those who grew up with them. There is such a very particular Dunkin’ foam cup feeling, aesthetic, and even sound (you know the sound I mean). But don’t be too sad just yet. In a new statement on its website, Dunkin' promised that the new paper cups, because they are double-walled, will mean you still don't need a sleeve to go around your coffee order. What's more, your drink will still be capped with the same classic re-closable lid, which also comes with its own aesthetic and set of sounds. You’ll still be able to get that Dunkin’ feel — now, it’ll just come with fewer environmental implications, which tastes even better than your morning coffee anyway.