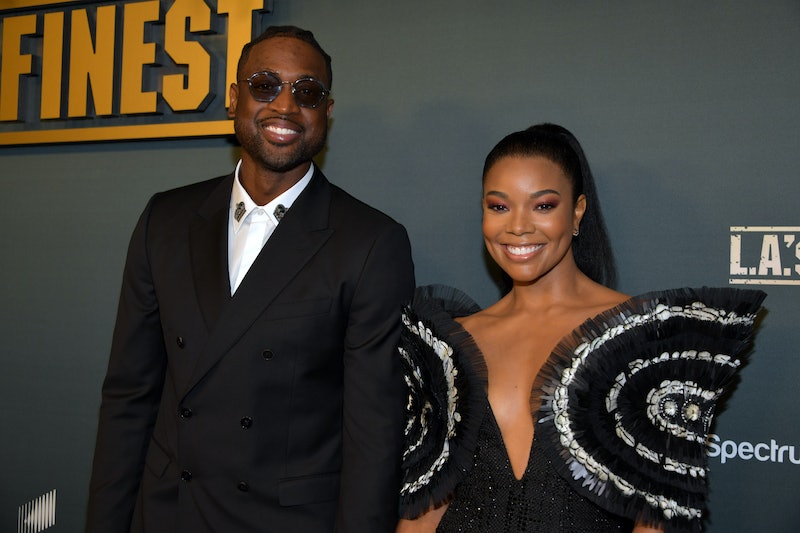 Just in case you didn't already know it, Dwyane Wade and Gabrielle Union are really supportive parents to their children. And as the basketball player recently said, that's just what good parents do. According to Variety, Dwyane Wade opened up about supporting son Zion at Miami Pride in April of 2019, and his comments about standing by his child should send a powerful message to parents of LGBTQ children everywhere.

During an interview with Variety at Cannes Lions, an advertising conference in southern France, the topic turned to Wade's public support of his son, Zion, attending a pride event with his family, including Union. While Wade did not attend the celebration in person, due to work commitments, he did take to his Instagram Story to share a supportive message for his son.

Though he didn't specifically address his son's identity too much — as he rightly said, "it’s Zion’s story to tell" — he did address the fact that he, and the rest of the family, have lent Zion their unwavering support. In particular, he touched upon the family's big support of him during Miami Pride earlier this year. “I think as a family, we should support each other. That’s our job," he said. "And my job as a father is to facilitate their lives and to support them and be behind them in whatever they want to do.”

Back in early April, Zion, along with his stepmom, Gabrielle Union, his older brother, Zaire, the newest member of the Union-Wade crew, Kaavia, and many other members of his family, attended a Miami Pride Day event. Even though Wade could not attend the event in person, he made sure to showcase his support for Zion on his Instagram Story, as he posted multiple photos from the event. He captioned a couple of the photos, which featured his son posing with his family members with a bright smile on his face, with messages like, "We support each other with Pride!" and "It's a family thing."

His social media posts were met with both praise and criticism, both of which, Wade explained, were unwarranted. Speaking to Variety, the athlete admitted that he was taken aback by some of the backlash he received, but that the negativity will never stop him from making sure that Zion is happy and loved. Wade also made a point to mention that simply supporting one's child, as he did, shouldn't be seen as something extraordinary. Rather, it should be the default. He said:

“This is my job as a father. I’m very uneasy about accolades that come from supporting my kids or the negativity that comes from it. I’m doing what every parent has to do. Once you bring kids into this world, you become unselfish. It’s my job to be their role model, to be their voice in my kids’ lives, to let them know you can conquer the world. So, go and be your amazing self and we’re going to sit back and just love you.”

Additionally, Wade related that he wished he had been there with his son to celebrate, but that he's glad Zion had so many loved ones with him to cheer him on. He wrote, "Zion had his on cheering section today. Wish I was there to see you smile kid!"

It's simply wonderful to see Wade, and the entire Union-Wade family, show Zion such a great deal of support. But, as the athlete said himself, it shouldn't come as such a surprise that he's right by his son's side. After all, that's just what a good father does.