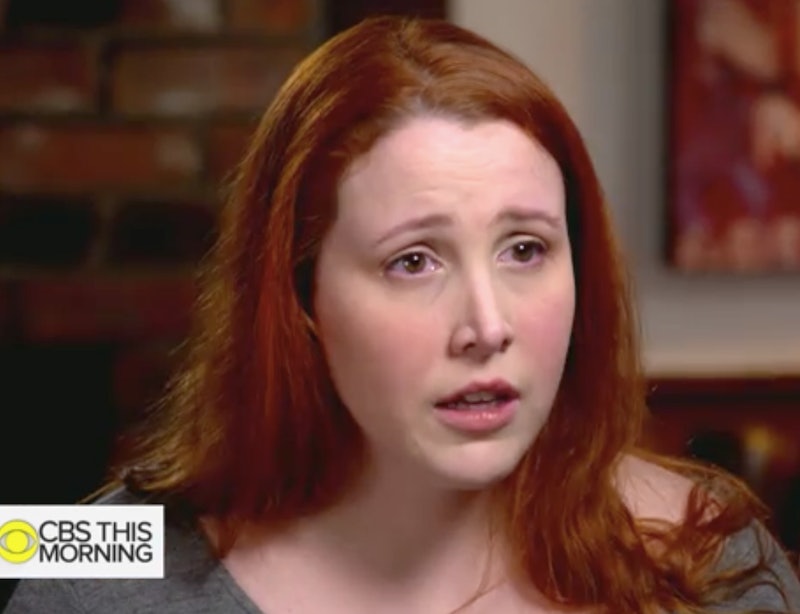 Sitting down with CBS This Morning's Gayle King on Thursday, Dylan Farrow gave her first television interview detailing the sexual assault allegations against her adopted father Woody Allen. In February 2014, Farrow accused Allen of sexually assaulting her when she was a child in an open letter in The New York Times. Allen has always denied Farrow's allegations, most notably in a New York Times piece he wrote in response that same month. But Farrow told CBS that she has told the same story for more than 20 years and will continue to tell it until people start listening — no matter the cost. "I want to show my face and tell my story," she told King. "I want to speak out, literally."

Sitting in her Connecticut home, the 32-year-old Farrow detailed the day in 1992 in which she claims Allen molested her. She said she was allegedly taken to an attic crawlspace in her mother, Mia Farrow's, home, where Allen then allegedly sexually assaulted her. "As a 7-year-old I would say, 'He touched my private parts,' which I did say," Farrow claimed. "As a 32-year-old, he touched my labia and my vulva with his finger."

In the CBS interview, King notes that, at the time of Farrow's allegations, Allen claimed that it was Mia Farrow's way of getting back at him after their split in 1992. That Mia was "out for revenge and full of rage" after he was caught having an affair with her 20-year-old adopted daughter Soon-Yi Previn, who Allen is still married to today. But Farrow questions why people believed that story over hers. "What I don't understand is how is this crazy story of me being brainwashed and coached more believable than what I'm saying about being sexually assaulted by my father?" she said, noting that her mother has always encouraged her to tell the truth. "She has never coached me."

Following Farrow's initial allegations, Allen was investigated by New York state child welfare, the Yale-New Haven Hospital Child Sex Abuse Clinic, and Connecticut state police. He was never charged with a crime, but the Connecticut state prosecutor said there was "probable cause to charge Allen but he thought Dylan was too fragile to face a celebrity trial," according to Vanity Fair.

Allen has denied all allegations and continued to do so in his latest statement to CBS, where he wrote that the allegations were "thoroughly investigated," and no charges were brought against him. He also stated:

"The Farrow family is cynically using the opportunity afforded by the Time's Up movement to repeat this discredited allegation, that doesn't make it any more true today than it was in the past. I never molested my daughter — as all investigations concluded a quarter of a century ago."

For decades Allen continued working with little to no mention of the allegations until Farrow's 2014 open letter in The New York Times, in which she spoke out against Hollywood's acceptance of the director, who was nominated at that year's Oscars. The accolades he had continued to receive "felt like a personal rebuke... a way to tell me to shut up and go away," she wrote.

Most recently, Farrow called out actors who supported the Time's Up movement — which stands up for victims of sexual harassment — at the 2018 Golden Globes, but who have worked with Allen. "No predator should be spared by virtue of their 'talent' or 'creativity' or 'genius.' No rock should be left unturned," she tweeted. "The principles of the movement need to be applied consistently and without exemption."

In her interview with CBS This Morning, Farrow said that she will continue to call out actors who work with Allen, but she isn't mad at them. She just hopes that those who wear those #TimesUp pins "can acknowledge their complicity and maybe hold themselves accountable to how they have perpetuated this culture of silence in their industry." After 20 years of repeating her accusations, she said, "I have been systematically shut down, ignored or discredited. If they can't acknowledge the accusations of one survivor's how are they going to stand for all of us?"

It seems that Farrow's claims are having an effect on those actors who have worked with Allen. Recently, Rebecca Hall and Timothée Chalamet have both donated their salaries from working on the upcoming Allen movie, Rainy Day In New York. Mira Sorvino, who won an Oscar for Allen's Mighty Aphrodite, wrote a letter apologizing to Farrow for working with the director.

What means the most to Farrow, who now works to help victims of sexual abuse, is hearing actresses like Sorvino and Portman say they believe her. (In an interview with Oprah for CBS Sunday Morning, Portman said, "I believe Dylan. I would want to say that. I believe you, Dylan.")

Knowing that people finally believe her allegations is gratifying, but Farrow has never felt speaking out was just for her; it was so every victim of sexual assault knew they had an ally.