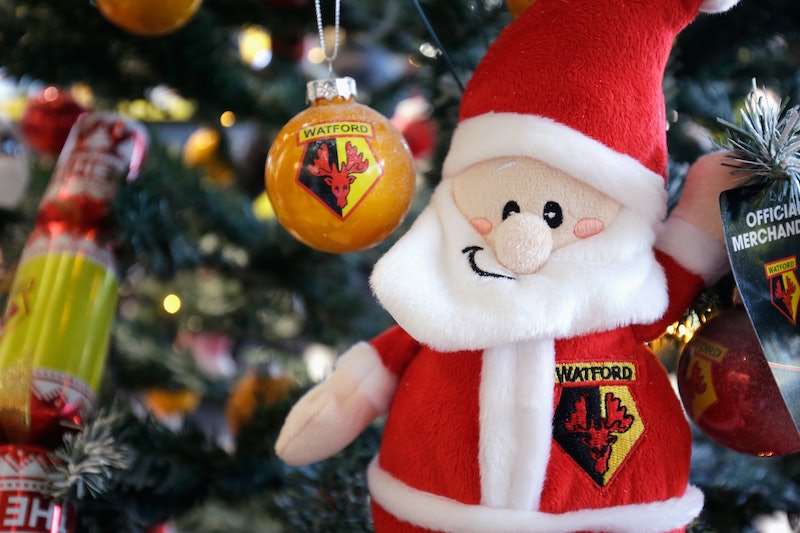 If you're a fan of starting the holiday season as early as possible, you'll be in good company in these states. Apparently, these 10 states listen to Christmas music earlier than the rest of the country: Massachusetts, Alaska, Iowa, Delaware, Tennessee, Ohio, Indiana, Kentucky, Utah, and West Virginia. The data comes from The Daring Kitchen, which analyzed more than 60,000 geotagged tweets about Christmas music.

It turns out the food site came across the tweets by accident, too. According to a press release, the staff set out to find tweets about Halloween candy, but they ended up being surprised by how many people were tweeting about Christmas music in October. And if you live in Massachusetts, your neighbors are the most festive of all: A full 2.4% of tweets geotagged to the state last month were about Christmas music. 'Twas the season in the northeast, apparently, even if Halloween hadn't come yet.

Since the data is based solely on tweets, it's not super scientific. There are probably people in the other 40 states who love listening to Christmas music early, too, even if they didn't share that fact on social media last month. Still, it's a fun way to see which places are feeling the Christmas vibe — and it looks like a lot of people are more than ready to ring in the holiday season.

And if you're thinking that holiday creep is getting out of hand, well, you're not wrong. It is a little strange to see Christmas items for sale before November even starts. (I can attest this is true at my local Costco store, at least, where the holiday cards and wrapping paper have been on display for at least a couple of weeks.) That's especially true, too, if you live somewhere with a mild climate, and fall seems to be kicking into full swing. Holiday creep is real — but for some people, that's perfectly fine.

Christmas music will be here before you know it, playing in stores and restaurants across the country. But for its truest fans, it's never too early to get the season started. According to ChartData.org, the quintessential Christmas song, Mariah Carey's "All I Want for Christmas Is You," is already back on the U.S. iTunes store's list of 100 most popular songs.

Fans of Christmas music got another treat in October, too. John Legend's Christmas album, A Legendary Christmas, was released last week. And when the album's first singles were released, plenty of fans tweeted about how happy they were to start listening to Christmas music, no matter what month it was.

So while it's totally fine if you want to wait until after Thanksgiving to get into the holiday spirit — or if you want to sidestep the holiday season entirely — not everyone in your circles might feel the same way. And if you do happen to be in one of these 10 states, don't be surprised if some of the people around you seem eager to spread the holiday cheer. 'Tis the (pre-)season, after all.

More like this
64 Genius Gift Ideas For Every Single Guy In Your Life
By Teresa Newsome, Mia Mercado and Brittany Leitner
10 Stranger Things-Inspired Halloween Costumes For True Fans
By Emma Carey
Everything To Know About Taylor Swift’s 10th Studio Album, 'Midnights'
By Grace Wehniainen and Jake Viswanath
Twitter Is Freaking Out Over Rihanna’s 2023 Super Bowl Halftime Show Announcement
By Stephanie Topacio Long
Get Even More From Bustle — Sign Up For The Newsletter