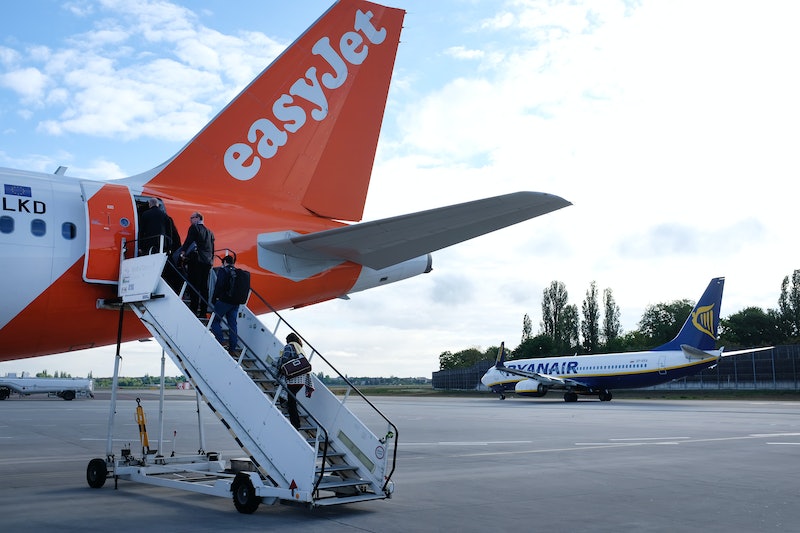 Travelling can be stressful at the best of times, especially when it comes to air travel and the ever evolving smorgasbord of increasingly stark rules and regulations. The most recent information regarding what you are and aren't allowed do is pretty jarring, especially if you're someone whose main squeeze has a keyboard and an apple. Because EasyJet may stop you using your Macbook during flights.

Did you just scream into a pillow? Or was that only me? Because guys, this is the stuff of nightmares. Especially if, like me, you've truly perfected the whole "download heaps of TV series to marathon while stuck in a steel tube in the sky" thing. And guys it's relating not only to turning it on, but also charging it. So you won't even be able to rack up battery power to enjoy when you touch down.

Seemingly though, this new rule doesn't apply to every single Macbook. It's only relating to certain models which are said to have faulty batteries. In a statement on their website, EasyJet explained the move is in relation to a report from the European Union Aviation Safety Agency (EASA).

"In light of EASA guidance in relation to a limited number of older generation 15-inch MacBook Pro units supplied by Apple Inc. between September 2015 and February 2017 which were subject to a recall, customers are advised that they are not permitted to switch on or charge these units during flight unless the battery has been replaced."

In this report the EASA suggested that airlines impose sanctions on the use of the relevant devices. And is that my model of laptop? Why of course it is, don't be ridiculous. But it's not only EasyJet that's banned the device, Business Insider has kindly put together a list of other airlines that have banned the device so you can check if you'll be affected.

This is the cherry on the top for EasyJet's already super tight and strict rules and regulations when it comes to hand luggage. The airline has a one bag only rule, unless you pay extra for a second bag or, shock horror, checking one in. Which is like the height of boujie in 2019.

The budget airline, which according to its website was set up in 1995, has long provided affordable air travel for customers. However, as with a lot of budget airlines, these cheap flights come with a fair few catches. As all frequent flyers know, as long as you stick to the rules then you're fine. Researching the baggage rules (their hand luggage size limit is 56x45x25cm, in case you were wondering) and making sure you don't book flights that are too late in the day in case of delays are key. However, for many there are a lot of issues with the airline. Which is very stressful for all involved but also makes for excellent television. And guys, they went there with Airline, a reality show about EasyJet crew, passengers, and all the drama surrounding them. The show ran from 1998 to 2006 and was a whole load of fly on the wall drama deliciousness.

More like this
This Is When Netflix Is Going To Start Charging You For Sharing Passwords
By Darshita Goyal
After 24 Years Of Disney Vacations, I Finally Took A Trip On My Own
By Charlie Mock
'The Catch' Revisits A Famed Irish Filming Spot From 'The Tudors'
By Darshita Goyal
24 Funny Valentine’s Day Captions To Use No Matter Your Relationship Status
By Jessica Booth
Get The Very Best Of Bustle/UK
Sign up for Bustle UK's twice-weekly newsletter, featuring the latest must-watch TV, moving personal stories, and expert advice on the hottest viral buys.