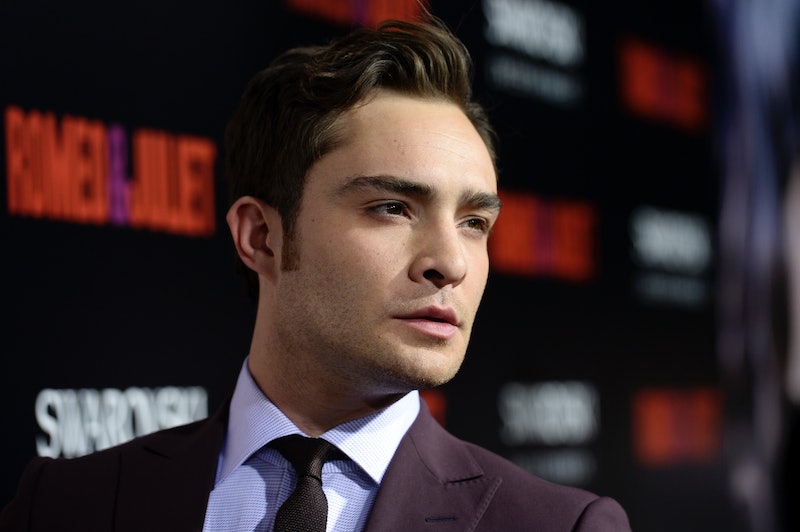 A little over a week after Ed Westwick was first accused of rape by an actor named Kristina Cohen, a third woman has made allegations of sexual assault against the 30-year-old actor. A woman named Rachel Eck has claimed Westwick sexually assaulted her in 2014, as reported by BuzzFeed News on Tuesday. Bustle has reached out to Westwick's lawyer for comment, but did not receive a response at the time of publication. The actor previously denied the claims of the other two women who have accused him of rape via a statement on Twitter.

Eck claims that in 2014, when she was 23 years old, she was invited to the Sunset Marquis hotel in West Hollywood by the man she was dating at the time, producer Kaine Harling. She claims that when she arrived around 2:30 a.m. Westwick asked her if she could invite a friend over, but when she couldn't he "turned his sights on me," she claims to BuzzFeed.

Eck claims that she, Harling, and Westwick, were the only ones there and that whenever Harling would leave the room, the Gossip Girl actor would allegedly "try to kiss me or kind of push me up against the wall." She claims that when she told Harling what was allegedly happening he brushed it off. Bustle has reached out to Harling for comment, but did not receive a response at the time of publication.

Eck, who now works as a creative producer, claims that as time went on “it got worse and he got more handsy.” She alleges that when she was about to leave, Harling told her Westwick wanted to apologize, but instead the actor allegedly "pulled me onto the bed and aggressively groped me." BuzzFeed reports that Eck was referring to her breasts allegedly being groped. She claims she then "shoved him off as quickly as I could and left."

BuzzFeed News spoke with three friends of Eck's who all claim they heard her tell the story before. Eck told BuzzFeed of the alleged incident, "I have never felt so uncomfortable in a situation like that in my entire life," but she says she decided to come forward with her claims after hearing the allegations from the two other women who have accused Westwick of assault.

This allegation follows two allegations of rape against the actor. On Nov. 6, Cohen claimed in a Facebook post that Westwick raped her in 2014 when she was visiting his home with a producer who she did not name at the time. Later, in an interview with The Hollywood Reporter, Cohen claimed the producer was Kaine. (Bustle also reached out to him at that time, but did not receive a response.) In response to this allegation, Westwick tweeted, "I do not know this woman. I have never forced myself in any manner, on any woman. I certainly have never committed rape."

Two days after Cohen posted her claims, another actor, Aurélie Wynn, claimed that Westwick raped her, also in 2014. Wynn claims that she and her friend went to Westwick's home, because her friend was dating his roommate, and that Westwick allegedly raped her after she fell asleep. Bustle reached out to Westwick's lawyer regarding this claim, but did not receive a response. He posted on Twitter regarding the two claims against him, denying the claims and calling them "unverified and provably untrue social media claims":

Cohen filed a police report against Westwick in Los Angeles on Nov. 7 alleging sexual assault, as the LAPD confirmed with Bustle. That investigation is ongoing. In response to the allegations against Westwick, the BBC announced that it would not air the miniseries Ordeal by Innocence, in which he stars, "until these matters are resolved," as BuzzFeed reports. Westwick has also stopped filming scenes for the series White Gold, as reported by Entertainment Weekly, which airs on the BBC, as well as Netflix.