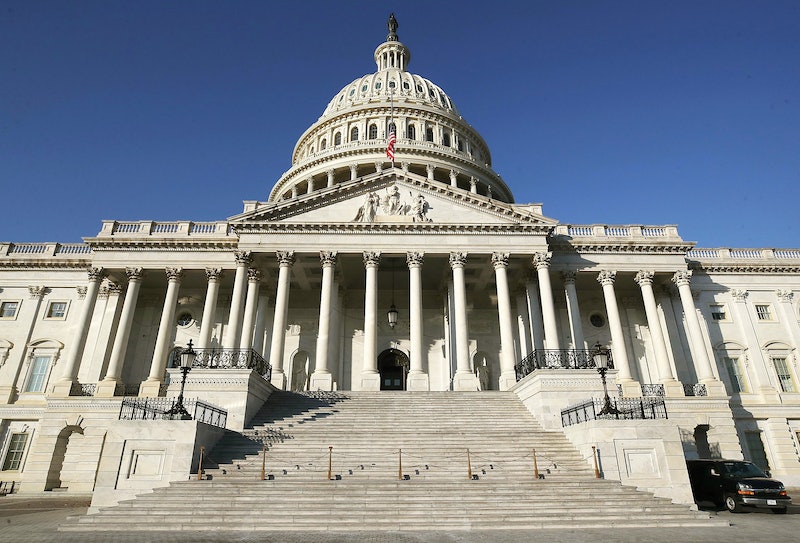 As 2018 slowly rolls to a close, it looks like the some government programs will continue to go unfunded. The effects of the government shutdown are increasing as time goes on, and many will hurt both government workers and the American public. The government has been in a partial shutdown since Dec. 22 — about 75 percent of the government was already funded through other spending appropriations, according to The Washington Post.

And the shutdown doesn't show signs of abating before the new year. On Friday, President Donald Trump threatened to close the southern border and said that lawmakers who are refusing to agree to fund a border wall are "Obstructionist Democrats," according to The New York Times. As the shutdown drags on, its effects could worsen. After all, it's incredibly difficult go without a paycheck in America.

Federal Funding Of SNAP And WIC Payments May Be In Jeopardy

Supplemental Nutrition Assistance Program (more commonly called SNAP payments or called food stamps) may be in jeopardy in the long term. The U.S. Department of Agriculture reported that SNAP beneficiaries are set to receive benefits through January, but didn't elaborate beyond the first month of the new year, according to ABC News.

Other programs like the Special Supplemental Nutrition Program for Women, Infants, and Children (you've likely heard it referred to as WIC) may also be at risk. WIC provides federal money to states to help low-income pregnant and postpartum women and their children who are at "nutritional risk," according to the USDA. ABC News reported the local level of these programs will continue, but the federal government will not provide additional funds.

Roughly 380,000 government employees are currently furloughed, and about 420,000 employees are working without pay, according to ABC News. But as the news network reported, if an employee is paid hourly, they aren't being paid for those hours they're required to be home, while employees who are on the job without pay may be reimbursed when the government shutdown concludes.

In an attempt to help those furloughed employees, the U.S. Office of Personnel Management tweeted out advice for dealing with creditors and other bills during the period of non-payment. Here is the sample letter the OPM provided. (A large percent of Americans live paycheck to paycheck.)

Many federal workers are now worried about not being able to take paid vacations — and thus losing the money they spent to book plane tickets or hotels — and many are worried about not being paid for scheduled vacations because paid time off is "canceled" after most shutdowns. "All scheduled paid leave and other paid time off, (including paid holiday time off), are canceled for lapse-affected employees during a lapse in appropriations," according to guidelines for the shutdown from OPM.

Farmers' Payments May Be Halted

ABC News reported that direct payments to farmers from the reauthorized farm bill went out last week, but if a farmer hasn't "certified production," those payments along with "farm loans and disaster assistance programs" won't begin again until the government shutdown is over.