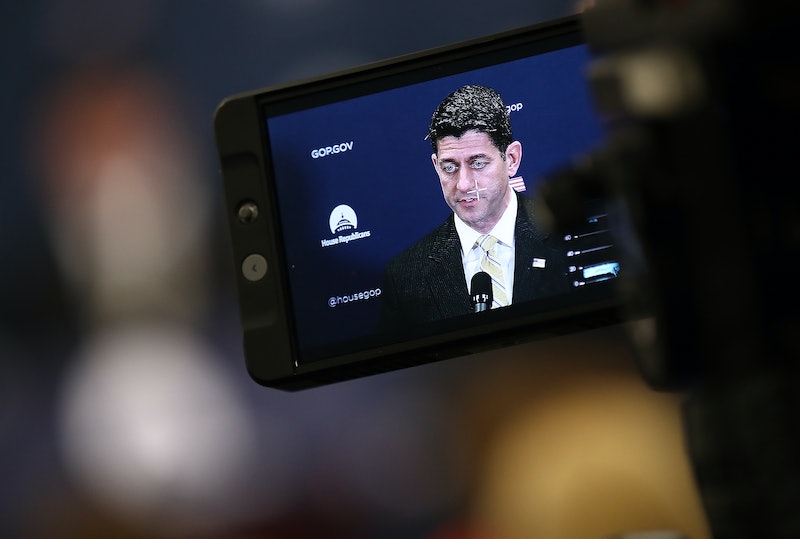 Last month, almost 100 eighth-graders refused to have their picture taken with House Speaker Paul Ryan. The kids were in Washington, D.C., for a class trip, and the Wisconsin Republican used their visit to take a picture for his Instagram. Ryan uploaded a photo of those who did participate to his feed with the hashtag #FridayFeeling. But when news came out that some students boycotted, cyberbullies attacked them in the Instagram comment section.

On Monday, one of the student who refused the photo with Speaker Ryan wrote an op-ed to respond to both the Speaker and the haters on Instagram. In short: You have to read it.

The eighth-grader, Jordan McCray-Robinson, who attends South Orange Middle School in New Jersey, wrote her response in the local newspaper, The Village Green, defending her decision not to take the picture.

"I decided I wasn't going to be used as a publicity stunt," she writes, noting that the decision was the same as many others in the class. She also called out the haters that have been commenting ever since on Instagram.

McCray-Robinson noted, "We were called 'losers,' 'stupid' and 'brats.' One man wrote, 'How did those 8th graders get so brainwashed to understand the politics of today and decide who is villain. I suggest this is the work of the teachers… useful idiots that they are.'"

Those are just a few samples. The comments go on and on with arguments related to Ryan, the GOP, and their policies.

And to those people, McCray-Robinson gave a message:

I am here to tell the nation that although we're only in the 8th grade, we have our own thoughts and opinions. My teachers did not influence my decision not to take a picture with Mr. Ryan. I decided I didn't want to take a picture with someone who doesn't have my best interests in mind. Mr. Ryan and the administration want to cut health care for 23 million people. Am I one of those U.S citizens that will be affected?

Going further, McCray-Robinson explained how diverse her class is, and why that mattered in fellow students' decisions. She interviewed several to see why: "I also think it's important that kids of different backgrounds are able to speak out about why they decided whether or not to take the picture," she explains. She includes quotes from LGBTQ+ and African-American classmates. Another anonymous student explains that even those who did take the picture don't necessarily support the Speaker's policies.

But the most important message McCray-Robinson shares is that children should be encouraged to have political opinions — not be silenced by adult bullies online:

I, for one, think it's ridiculous for adults to shame kids for being politically aware and not being afraid to express ourselves. I think it's not only rude, but ignorant to tell a 14 year old that they're not entitled to an opinion because "kids have no experience in the real world, so who should care about what they think or say." Excuse me?! If I'm not in the "real world," where am I?

This message should be shared loud and clear for all to hear — especially for those who try to shut down freedom of expression online with hate-filled comments, something teens are all too familiar with.

McCray-Robinson summed it up perfectly:

I will not tolerate my peers and I being shamed for voicing our opinions. My generation is the future. I will be working and living in a society created by today's decisions. So why shouldn't I be able to speak my truth?