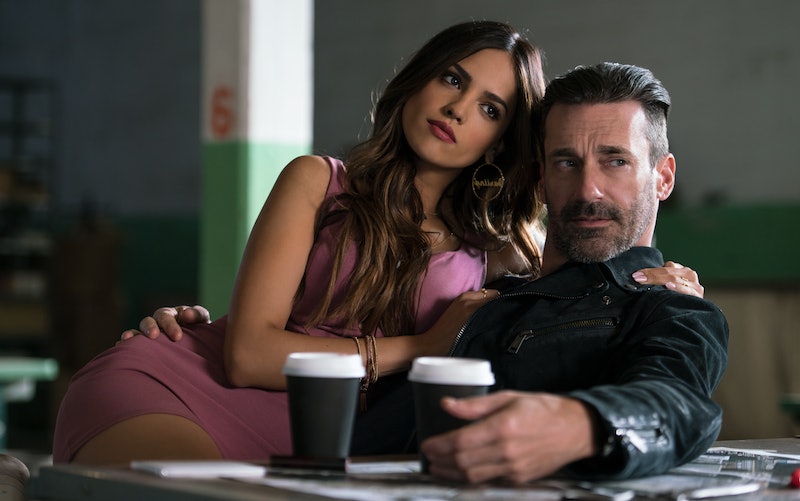 Running in heels is generally a "don't" for a few reasons. One, it can be downright dangerous (rolled ankles can lead to nasty sprains — I know from lengthy personal experience). Two, it evokes the oft co-opted quote about Ginger Rogers doing the same things Fred Astaire did, only "backwards and in high heels." Wearing heels while doing strenuous things has often been held up as a sign of success for badass women making it work in a man's world — the heels an indication of the extra work they have to do to garner the same success. Now, this image has grown a bit tired and women running in heels in action movies almost instantaneously garners groans from the internet masses, often for good reason. But for Baby Driver's Eiza Gonzàlez, action scenes and impractical footwear are actually cozy bedfellows.

Speaking to reporters on the film's Atlanta set back in April of 2016, Gonzàlez responded to the popular criticism of women running in heels in big budget action movies — something her character, Darling, does throughout the Edgar Wright film. "This sounds crazy, but I was born in the fashion industry. So, I probably wore heels by the age of two. When I was two I would steal my mom's heels. So, for me, being in heels and running around is the most normal thing I've ever done," says Gonzàlez, perched on a flimsy folding chair between trailers in muggy Downtown Atlanta, a table of recorders pointed at her. She dons a fake tattoo that reads "His" in cursive — her love interest and co-star, Jon Hamm, dons a matching "Hers."

"I used to tour and jump off stage with heels. Like, that's how bad it is. So, for me, doing all of these heists [in heels] has been really easy," she adds. But Gonzàlez is well aware of the criticisms of films like Jurassic World, which had Bryce Dallas Howard running ahead of a menacing T-Rex in sensible (though still impractical) heels. "I totally understand [the criticism]. There's moments where you're like, 'This floor is not helpful.'"

It should also be noted that Baby Driver isn't exactly happening in a reality that anyone would describe as "everyday." The film's protagonist, Ansel Elgort's Baby, drives throughout the movie with headphones in, performing spectacular driving stunts in time with his own personal soundtrack. Each character's wardrobe also takes on its own heightened reality, matching the imaginative elements of Wright's vision.

"I really just took my cues from Edgar. So when he wanted to go bolder, I’d go bolder. I mean, I bring it. I’m bold, but, you know, and one of my favorite things is this lilac fur coat I put on Darling," explains the film's costume designer, Courtney Hoffman, adjusting her stylish leather jacket in the lunchroom trailer on the Baby Driver set. "I said to Edgar, ‘This is what this character needs to be in a shootout in, because when’s the last time you saw someone in a lilac fur coat shooting guns?’ Not enough."

And the impracticality of these outfits — both on Gonzàlez's Darling and Lily James' Deborah, Baby's dream girl who dons a '50s-style waitress outfit throughout the film — isn't at all lost on Hoffman (though she admits they did change one of Darling's looks because "we were like, 'You will actually just break your neck'"). In fact, the seasoned costume designer was practically leaning right into the absurdity of it all.

"I mean, isn’t the cool thing that if you’re a badass woman you can do anything in anything? And so for Darling we wanted her in super high heels no matter what the situation was and Eiza was like, ‘Bring it!’" she explains. "[Wright] really likes femininity to be ultimate femininity and he wants masculinity to be masculinity ... he gravitates towards women in dresses or women in skirts and, not that that’s in every scene, but there is something [that I think is] fun in a movie like this that’s very much a Man’s World to make the women that enter it be women, but be badass women ... I kind of wanted the women to have an impracticality to their aesthetic, while still acting [as] fearless leaders in their own right."

And considering that Elgort's protagonist has his own ridiculously impractical "super power," I suppose it makes sense that Gonzàlez' Darling would get her own death — er, broken bone-defying stunts. That being said, I highly doubt we'll be swapping "backwards and in high heels" for "in a lilac fur coat and stilettos" any time soon, no matter how tempting that imagery is.