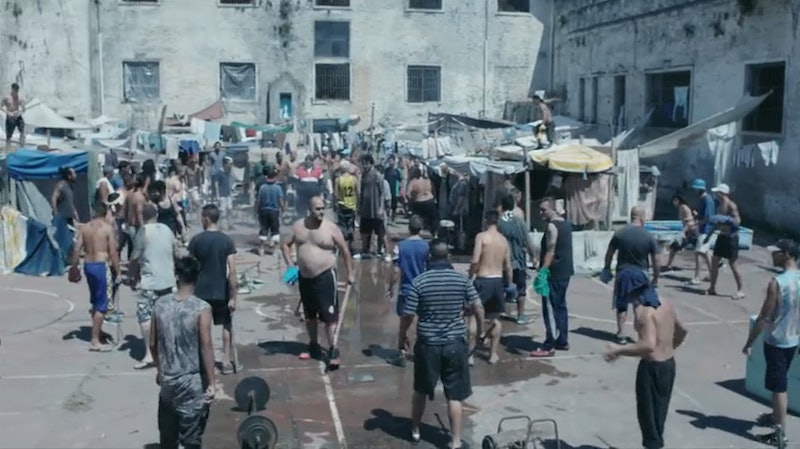 If you think life behind bars on Orange is the New Black looks rough, you ain't seen nothing yet. El Marginal, which returns to Netflix Sept. 28, peers inside the gritty travails of Miguel Palacios, a former cop posing as an inmate at San Onofre Prison, where he must navigate a dangerous gang hierarchy in order to gather intel about a kidnapped judge's daughter. It's a dark premise, but in the wake of Narcos, one that doesn't feel entirely improbable, and Juan Minujín is so convincing in the role that you might wonder if El Marginal is based on a true story.

Sorry to disappoint you, true crime fans, but El Marginal, by all accounts, seems to be a work of fiction. It does, however, have some history behind it — even if indirectly. According to La Nacion, El Marginal films inside the remaining structures of Cárcel de Caseros, or Caseros Prison, in the south of Buenos Aires. The Argentina Independent reports that the now-defunct penitentiary was first commissioned in 1958, but wasn't finished until 21 years later. The 22-story building stands in the shape of an H, and was designed to prevent any direct sunlight from ever reaching the prisoners inside. Originally, said prisoners were only meant to be held there for a maximum of 180 days, but over time, many individuals remained inside for years.

Per the Independent, Caseros was designed to hold around 2,000 prisoners in 1,500 1.2-by-12 meter cells. At first, most of the prisoners were left-wing militants incarcerated during the governmental reign of Juan Perón and his wife, Isabel, in the mid-'70s. But after Argentina returned to a democratic structure in 1983, the prison was used to hold regular criminals, as opposed to political ones. Still, it was far from a happy place: Cells were often crowded with as many as five inmates. In 1984, a prison riot broke out in which prisoners knocked holes in the outer walls so that they could see the sun, and removed the glass in the visitor’s booths so they could have direct contact with their loved ones. Conditions eventually improved, but rumors about human rights violations continued until Caseros' official closure in 2001.

Today, the Independent continues, all that remains of Caseros is the original, smaller prison structure that was erected in 1880 and the outline of the H-shaped building, though La Nacion reported in March that they're being renovated to make space for a new General National Archive.

According to PopSugar, Season 2 of El Marginal will jump back in time to three years before the events of Season 1, unpacking the backstories of the prisoners and guards at San Onofre. For that, La Nacion reports that the prison set has been lightened and cleaned up considerably from last year (which makes sense given all the renovating going on). But just because things might be looking a little better on the outside at both Caseros and Onofre Prisons, things likely aren't going to get any easier for the inmates in El Marginal.