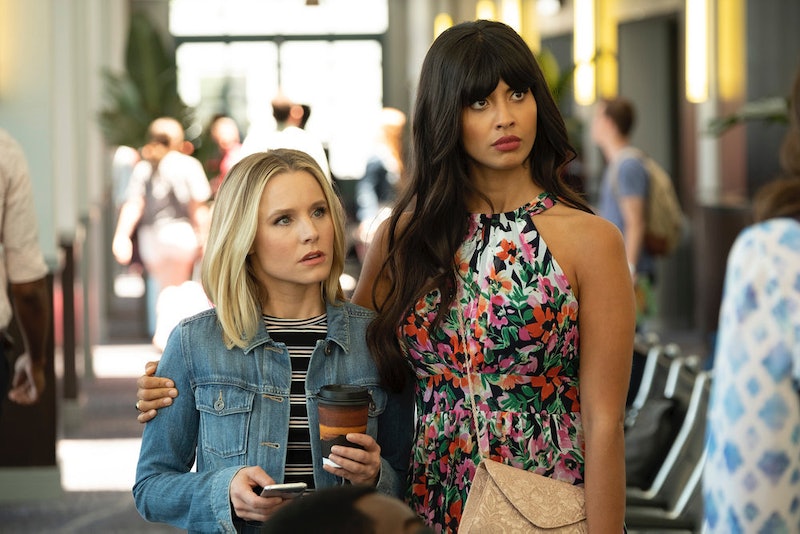 Spoilers ahead for The Good Place Season 3, Episode 5. If anyone was a shoo-in for the Bad Place on The Good Place, it was Eleanor's mom, Donna Shellstrop. Eleanor even suggested as much herself, suspecting that both her parents ended up being eternally tortured down there. But Thursday's episode just changed all that because Eleanor's mom is still alive on The Good Place — and Eleanor is not happy about it.

In fact, when Janet and Michael spill the news that Donna faked her own death, Eleanor loudly proclaims that she's going to go kill her herself. And since there are no moral repercussions to anything Eleanor or her three Good Place friends do anymore, she could technically follow through on that threat. But the new and improved Eleanor who can't help but do good things will probably end up trying to help her mom get better so she can get into the Good Place, much like Jason tried to help his dad.

Of course, Donna could be just as much of a lost cause as Donkey Doug was. In flashbacks, viewers have learned a little bit about Donna, and none of it has been good. In one scene from her childhood, Eleanor asked for emancipation as her birthday gift, which Donna happily agreed to — once Eleanor explained what emancipation means. In another flashback, she told Eleanor that her dog was dead (Donna killed him), but that if Eleanor got sad about it, it would be annoying. Donna also hit on Eleanor's boyfriend during Eleanor's dad's funeral.

And that's just a sliver of the childhood that Eleanor had with her mom. The two don't seem to have ever been close, with Donna once telling Eleanor, "You're a really interesting person, Eleanor. We should hang out some time." Now, they will be hanging out — but it doesn't sound like they'll be mending any fences. "I come back as maybe the worst mother that's ever existed," Leslie Grossman, who plays Donna, told GameSpot.

Still, just because Donna is terrible doesn't mean Grossman has a terrible time playing her. "It's one of my most favorite jobs that I've ever had the good fortune to have in my entire career," she continued. And, in Season 3, Grossman said she got to work with Ted Danson (Michael) for the first time — hinting that Michael will be providing some backup to Eleanor when she sees her mom again. (Likely just to make sure no actual murdering goes down.)

"I love that show so much," she added. "To work with Kristen Bell is such a dream, and I get to work with Ted Danson, which I haven't had the chance to do before ... he's such a joy, and lovely, and funny, and fantastic, and it was so fun to get a chance to work with him."

As far as what else fans can expect from Donna, Grossman said simply, "Keep your eyes out for me and my tacky, tacky wardrobe and extensions, which are hilarious."

It's about to get forking wild on The Good Place, y'all.