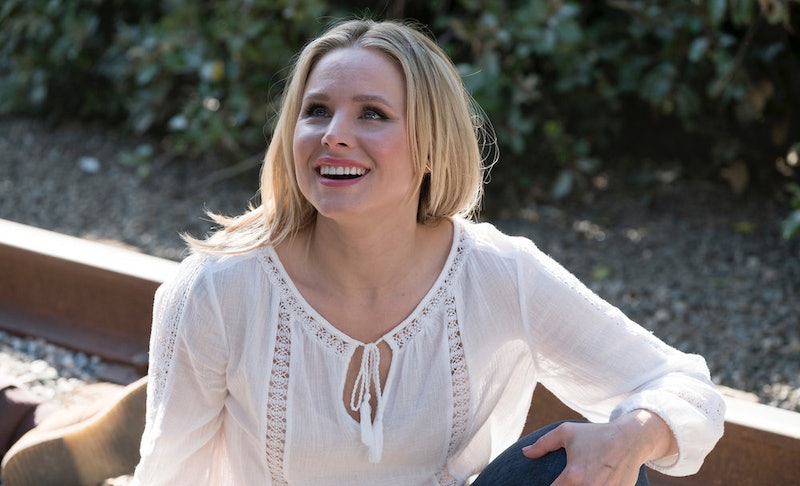 Eleanor, Chidi, Tahani, and Jason are required to take a leap of faith — or a "Leap Into Faith" — during the midseason premiere of The Good Place (producer: Megan Amram) Season 2. Spoilers follow. After Bad Place boss Shawn gives Michael a promotion, Eleanor convinces the rest of the group that Michael is still on their side. Her gamble pays off and rather than get sent to the Bad Place to be tortured forever, the four humans survive another day in the fake Good Place. Now the next step in the plan is to have Michael take them to the actual Good Place, but is that even possible? While Eleanor and crew seem hopeful, it seems at the end of "Leap Into Faith" that Michael hasn't been completely forthcoming with them.

Earlier in Season 2, in "Team Cockroach," Eleanor agreed to team up with Michael because he promised the humans that he could get them to the real Good Place. "It's complicated. It may take a while to arrange especially since I'll have to do it in secret, but yes, yes, there is a potential method of transportation," Michael said. Yet, Michael was occupied with Chidi's moral philosophy lessons and becoming a better person (err, demon) in the beginning of Season 2, so viewers haven't really seen him working on this transportation to the Good Place.

Unlike the Medium or Bad Places, you can't take a train to the Good Place. But Michael is the only one who truly understands the complexities on how to get here. And while he has proven he is trustworthy, especially after "Leap Into Faith," his face falls a bit at the end of the episode when Tahani says they "might actually get a chance to go to the real Good Place." And considering all the curveballs that The Good Place has thrown, would it be reasonable to expect that they'll all be traveling to their destination in the next episode with no issues?

Getting to the Good Place is only easy if a human lived a good life while he or she was alive, which Eleanor, Chidi, Tahani, and Jason did not by Good Place standards. Yet, like Michael, they have all improved themselves in terms of ethics, self-awareness, and morality. So, even if they can get to the Good Place, will it accept these four humans now that they've changed? Or perhaps, they haven't changed enough and still aren't Good Place material.

In Season 1, Shawn first arrived as an "Eternal Judge" to rule on Eleanor's fate when everyone still thought they were in the Good Place. While that turned out to be a con as a way to torture the humans since Shawn is another demon, there could really be a judge that exists to rule on such matters. If the transportation gets sorted out, then it wouldn't be hard to imagine that there'd be some sort of gatekeeper at the Good Place — like St. Peter at the pearly gates of heaven in Christianity — who would have to approve of the humans' worthiness before they could be let in.

That's putting the cart before the horse a bit though since Michael may not be able to get the humans there in the first place. But at least they have Janet with them, who always proves helpful in delightful ways during a crisis. With her vast knowledge, Michael might be able to figure out a way to get them all there. After all, that's where Good Janet belongs anyway.

While it's exciting to think that these four characters could break out of hell, there is a slight downside. Shawn has ordered the fake Good Place simulated community to be erased. That means Eleanor's modern, clown-filled home and the frozen yogurt places might cease to exist forever. It will be a major transition for the show and both fans and the characters will have to say goodbye to a setting that they love. But Eleanor, Chidi, Tahani, and Jason know that salvation exists on the other side — just as long as Michael hasn't been lying about getting them there.