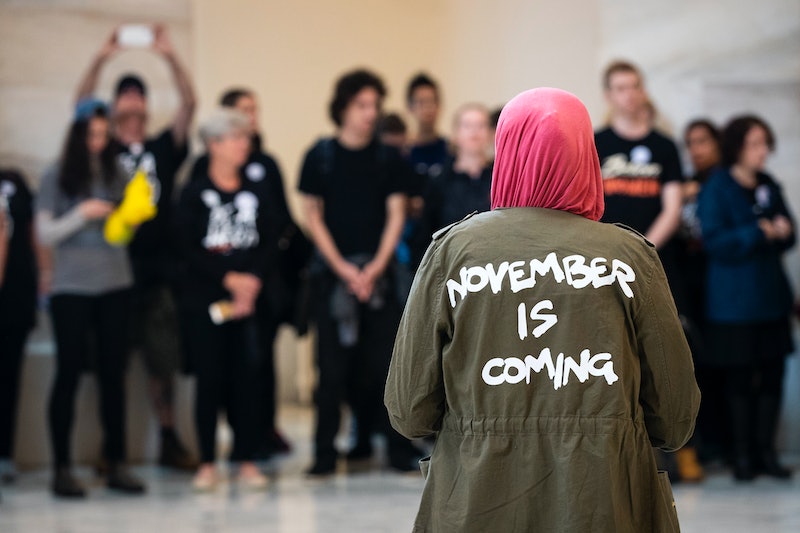 With so many women running for office in the midterm election, 2019 could see a drastic rise in the number of female lawmakers serving on Capitol Hill. And a shift in Congress' gender representation will do more than alter a few statistics, as a new report found that women candidates put more focus on certain issues than men on the campaign trail this year.

Researchers from the Brookings Institution's Primaries Project shared data with Politico pointing to the fact that women were more likely than their male counterparts to mention abortion, education policy, same-sex marriage, and gun control in this year's Democratic primaries. Though the majority of women vying for a seat in Congress this year ran as Democrats, according to the Center for American Women and Politics' (CAWP) count, Brookings' researchers found that Republican women candidates were also more likely to bring up federal education policy than Republican men.

The data suggests that men and women from the same party generally don't differ much when it comes to the policies they support — health care was the most popular campaign issue for all Democrats, regardless of gender — but it's telling that women put more of an emphasis on certain issues. Though progressive male politicians tend to champion abortion rights and gun control when the issue is raised, women lead the charge in raising the issue in the first place.

Of course, time will tell whether women candidates' campaign talk actually follows them to Washington, but Politico predicts that women's priorities will reshape the Democratic Party's agenda going into 2019. A record-shattering 476 women ran for the House of Representatives this year, according to the CAWP's data; the 237 still in the running ahead of Tuesday's midterm election are expected to help Democrats take back the House.

Though a split Congress would make it difficult for either party to push through any major reform, the Brookings Institution's findings hint that women elected to the House this year will make a point of bringing up abortion, education, same-sex marriage, and gun control more often than the male-dominated Congress of the past.

Many women running for office as Democrats also haven't shied away from talking about their student loan debt in the midterm election, highlighting another issue that Congress hasn't done much to address. Just one in 10 members of Congress holds student loan debt, according to Roll Call — a number that could also rise after Tuesday's election.

"When you have to work hard for your education and you have to pay for that education, you understand that it’s your way out of maybe a socioeconomic situation, or career advancement. I’ve worked hard for every level of my career," Vangie Williams, running in Virginia's 1st District, told Bustle last month. "I want to make sure that people understand that as a black woman, I have to strive a little bit harder than the average white male or the average white woman."

If midterm election predictions prove to be true, the next Congress will be made up of a lot more women, minorities, and LGBTQ lawmakers — and that new diversity will likely drive which issues Congress chooses to tackle.