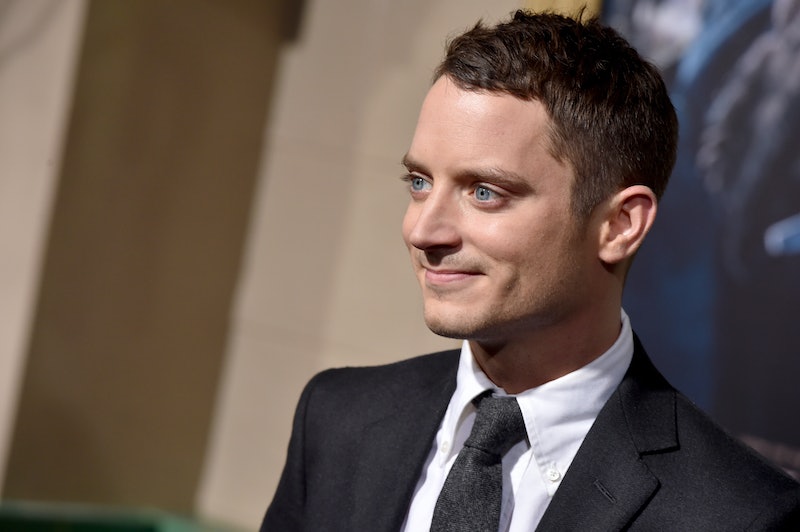 On Thursday night, The Tonight Show With Jimmy Fallon was illuminating. Not about politics or news, but about something that seems like a common denominator even in these trying times: The Bachelor. Fallon's guest was Elijah Wood, who revealed that he is friends with Nick Viall, this season's titular Bach'. And Elijah Wood reassured viewers that his friend is totally pure in his intentions to find the woman of his dreams. Wood even has a favorite contestant, because of course he watches his buddy date a large group of women on TV. And Fallon, ardent Bachelor fan, was jealous as all get out.

Wood said that he knows Viall "through his friend Kyle." (Thanks Kyle!) The 36-year-old said he knew the Bachelor before he was The Bachelor, but not before he became a fixture of the franchise. (He was the runner-up on two seasons of The Bachelorette and was featured on the third season of Bachelor in Paradise. The man is committed.)

"I kind of knew about his Bachelorette experiences and found it fascinating. And then I knew he was the Bachelor before it was announced or anything," he revealed, to which Fallon gasped in envy.

And Fallon wants to know what everyone wants to know: "It's real, right? He's looking for love?" (I wish I loved anything as much as Jimmy Fallon loved The Bachelor.) Wood said, "It's real. Yes! He is ... Here's the thing about Nick. I think a lot of people question whether he is real or if that is really him on the show, in the way that he's presenting himself, and that is him."

Fallon seemed unconvinced, but Wood went on, "He’s a very genuine individual. He's got a lot of integrity, I can unequivocally say that."

Having Frodo on board is a pretty solid endorsement. And Wood watches the show, too, though this season is his first time viewing. "I was curious!" he said. "I watch the show every Monday. It's really weird!"

He and Fallon also talked about Corinne, and Wood referenced her "platinum vagine," so you know he's not bluffing about being a viewer. Although strangely enough, her nanny did not come up. Wood summed up the show perhaps perfectly and poetically, "It's kind of like a weird human experience. I find it equal parts entertaining, I'm excited for Nick to find love, and I'm also disturbed." Same, Elijah Wood. Same.

Fallon and Wood talked a lot about the show, including how absurd some of Viall's conversations with the women are, the way host Chris Harrison pops up at the strangest times, and who Wood is rooting for. And like many other fans, he was totally rooting for Rachel Lindsay the whole time, and he and Fallon got indignant about the fact that it was spoiled that she didn't win — she was already announced as the next Bachelorette and the first black woman to be the show's lead. "It's a big spoiler! I guess I am invested," Wood said.

Wood is pretty cute talking about The Bachelor, I won't lie. But it's very weird that he's watching his buddy date on national television. He knows it's weird too: "I can't believe I am having this conversation ... What have I become?!" But he promised he would pass along Fallon's well wishes to Viall, who is totally in this for real. Wood promises.