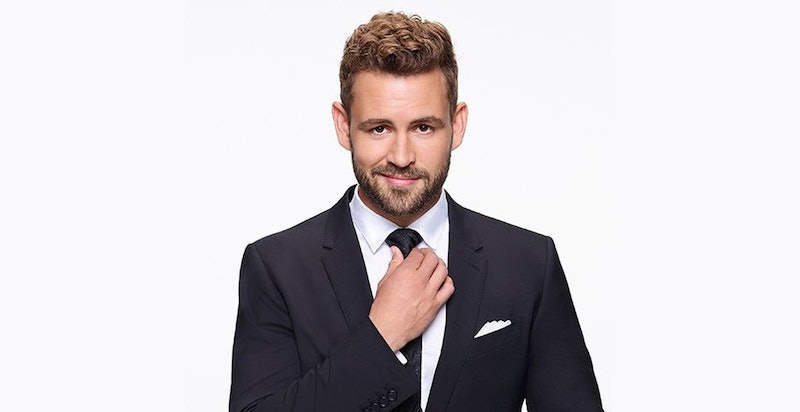 Being on The Bachelor is tough, but imagine what it's like being the Bachelor? Just ask Nick Viall. He has been around the Bachelor block a couple of times, but he's really starting to feel the pressure this season. Viall battled some intense emotions on Monday's episode and questioned whether or not finding love on the show was a real possibility for him. But that's all part of the job, right? In an interview on Bustle's Bachelor podcast, Nick Viall reveals how he makes decisions on the The Bachelor, and there is a method to the madness, as it were.

On this very special episode of Will You Accept This Podcast? (which you can listen to here), Viall joins Bustle’s Senior Entertainment Editor Kelsea Stahler and Romper Senior News and Entertainment Editor Allison Piwowarski to discuss his season and what was going through his head as the show approached the most difficult point in the season. "Ultimately, I knew even going into this process, I assumed that there would be times where it would be hard to make decisions," Viall admits. "I think being definitive when I did know gave me more credibility when I have to use all the time allotted to me to make decisions."

But, at the end of the day, The Bachelor is a show that forces contestants to wear their hearts on their sleeves. Viall knows from experience that honesty is the best policy when it comes to the show, so he made sure to be as forthright as he could with the women. "It was important to me that at any moment I realized I didn't see a future with any of these women that I didn't have to wait for a rose ceremony to send them home," he says. "And, while in the moment that might seem awkward or more surprising and might hurt people's pride, I thought it was actually better in the long run for them."

Nick knows that being the Bachelor comes with receiving tons of criticism for making decisions, but, as a viewer, it's nice to know that they are coming from a place of honesty and respect for the women. That's all a contestant can ask for, really.