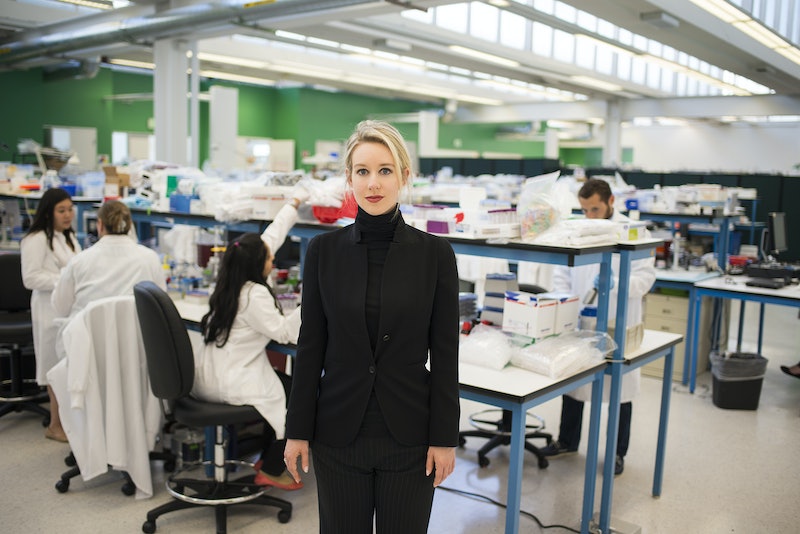 America loves a good story, and Elizabeth Holmes turned herself into a great one. Anyone who hasn't yet heard the details of what could be considered a cautionary tale could learn a lot from watching HBO's The Inventor: Out for Blood in Silicon Valley, streaming now. The documentary details Holmes's rollercoaster career, from being lauded as a game-changing visionary to now facing serious charges for the way she ran her business. And two of the film's producers came out of the process believing that Holmes leveraged her gender to achieve the notoriety she craved.

Producers Erin Edeiken (Robin Williams: Come Inside My Mind, American Jihad) and Jessie Deeter (Steve Jobs: The Man in the Machine) worked with director Alex Gibney on The Inventor, which digs deep into the Elizabeth Holmes saga. Both discovered that women looking for success in similar fields fear that Holmes's legacy will overshadow any others — specifically because she was so publicly hailed as The First, The Most, The Best. Edeiken and Deeter met with women who worked at Holmes's company Theranos, but would not speak on the record for The Inventor, concerned about how other women will be affected by the public learning more about Holmes's alleged deception.

"We have to be held to the same standards as men, right?" Deeter says over the phone, lamenting that attempts to convince these women to participate were frustrating and for naught. "Across the board, we have to be as good. If we're swimming in the same pond and taking hundreds of millions of dollars like they do, then we have to be equally responsible. I thought that was kind of the worst excuse for a reason not to talk to me that I ever heard but it was a real one, and I did get it."

As the documentary details, Holmes was a young, bright, studious woman who studied chemical engineering her freshman year at Stanford, only to drop out at 19 when she founded her own consumer healthcare technology company. That company, later named Theranos, proposed to do something quite remarkable — with just one tiny prick of a finger, Holmes' testing machines were said to provide inexpensive, accurate, and user-friendly health information on more than 200 potential diseases. Investors were enthralled, helping to make Holmes an almost immediate billionaire, while the media celebrated her as a new feminist icon — a self-made business woman changing the world by making healthcare more accessible for everyone, signing a major deal with Walgreens to put Theranos labs and wellness centers in Arizona, California and Pennsylvania. Holmes was suddenly the ultimate success story, and her being a woman made her stand out in a sea of male successors.

But almost as quickly as she rose, Holmes' story took an unexpected turn. In 2015, The Inventor details, reporter John Carreyrou published the first Wall Street Journal article that would be instrumental in what became an eventual Theranos takedown. Carreyrou's investigation into the highly-secretive methods and work atmosphere demystified what Holmes had tried to keep hidden from the public and investors: Theranos could allegedly not deliver accurate results, and would often use commercially available testing technology instead of its own, per Carreyrou's 2018 book Bad Blood: Secrets and Lies in a Silicon Valley Startup.

One month after the book was published, Holmes and her former boyfriend/Theranos COO Sunny Balwani were charged with massive fraud by the Securities and Exchange Commission, as well as wire fraud and two counts of conspiracy to commit wire fraud by a federal grand jury, as reported by CNN. Holmes settled the former charges with the SEC, paying a fine of $500,000, returning all her existing Theranos shares and voting rights, and agreeing to not serve in any officiating or directing capacity for a public company for at least 10 years, per ABC, who also reports that her federal trial is likely to take place later this year. Both she and Balwani have pleaded not guilty to federal charges.

This was all just three years after Holmes was named Glamour's Woman of the Year, listed on Time's Most Influential People in the World, and appointed a member of the Board of Fellows at Harvard Medical School. Inc. magazine proclaimed her The Next Steve Jobs, while Fortune, Forbes, and even T magazine capitalized on her highly stylized depiction of a winner, a woman on top. With her signature long blonde hair, blue eyes, and penchant for serious all-black ensembles (most notably, Jobs-inspired black turtlenecks), Holmes was mass media's ideal new cover model — the new American dream.

But when her triumph came into question, Holmes began to symbolize something else entirely: A woman who had been seemingly set up for victory and failed. If she couldn't sustain that kind of success, how could any other woman hope to do the same, especially among the sharks of Silicon Valley?

In a separate call, Edeiken relays that at a recent SXSW screening of The Inventor, some women working in Silicon Valley startups expressed issues they had with the film, specifically in that it was a negative portrayal of women entrepreneurs.

"I was shocked that still women might have that opinion because in my mind, I think we can do better than a female entrepreneur who was a fraud and a liar," Edeiken says. "You can't avoid the topic of gender with this story because it was very much a part of her meteoric rise to fame and success. [Holmes] definitely used her gender to her advantage in building her story and her own myths — I think she then used her gender as an excuse to why the spotlight was put on her when it all fell apart."

Early on in the filmmaking process, Edeiken spent five hours having dinner with Holmes herself. In addition to maintaining her innocence (largely claiming to being unaware of what her employees had screwed up without telling her), Edeiken claims that Holmes presented herself as a victim of gender bias.

"She very much played the woman card and very much saw herself as the female astronaut in the field," Edeiken says. "She told me point blank that men are allowed to fail time and time again in Silicon Valley but she was not — she's held to a different level of scrutiny and not allowed to fail because she was a woman. It was personal. She felt it was very personal in a way that wasn't when people would talk about, for example, a company failure, she felt she'd been personally attacked by John Carreyrou."

Edeiken says she found it difficult to see the charm in Holmes that so many powerful people (largely rich, white men who became her investors) had, especially when there was so little proof of Theranos' ability to deliver what Holmes promised it could. And other women seem to have felt the same. Dr. Phyllis Gardner, a professor of medicine at Stanford, recalls in The Inventor that Holmes thought up and brought her a design for a medical device. Despite Holmes's confidence, the design was not functional, in Gardner's opinion.

"If you break down the genders and who was supportive of her in an authoritative position, there's something to be said that it was all older white men," Edeiken says. Among those were investors like Bill Draper, who appears in The Inventor, as well as U.S. Marine Corps general James Mattis and former Secretaries of State George Schultz and Henry Kissinger, who do not appear on camera. "So there's something really interesting there. I'm reluctant to say for sure what it is because we just don't know. I think it's easy to make assumptions about saying she was flirting for using her sexuality in some way to get these men to give her money for her business, but I don't know. It seems a little too easy and convenient."

Unfortunately, even with all of the support and money she garnered in just a handful of years, Holmes seemed to refuse that her vision couldn't be realized exactly as she'd dreamt it. That's how her story became not one of a woman inventor who failed because she's a woman, but of an inventor who happened to be a woman and allegedly refused to be transparent and realistic about servicing the public in a way it seems she genuinely wanted to.

"Whether it's on the biochemistry side or the engineering side, she couldn't have made over 200 [blood] tests work in this little tiny box because the laws of psychics don't allow; because they're different processes required for each test, for each type of test," Deeter says. "So that wasn't going to happen, but what if she had six different boxes for six different types? ...When I ask the employees why they didn't quit, it's because they all believe that she was going to eventually come around and figure something like that out."

Since the revolutionary idea and investment power of Theranos brought her into the zeitgeist, Holmes has been a source of constant fascination — though in her downfall, the attention has turned into from praise into scrutiny. The Inventor is just one of several projects either already released or forthcoming (including a feature film version starring Jennifer Lawrence), with many storytellers clamoring to unravel the mystery of Elizabeth Holmes, and the inevitable understanding of what damage may have been done in her representation as a woman who made it in Silicon Valley, only to disappoint those who believed in her ability to alter the way we live.

"Silicon Valley was hungry for a woman to come up and I think she was just there at the right time and the right place," Edeiken says, speculating that if Holmes had simply rolled out an app that didn't work, she wouldn't be the front page news she is now. "But you can't separate her story from what she was selling, too, and she was selling something that was going to impact people's healthcare in a positive way ... So I would be curious to know what this story looks like if you separate her from the vision she was selling, too. I don't know that it would be an interesting story or that it would be something we'd even be talking about."

"I think that this film is about all of us in some way," she continues. "Not just about what she did but about us and how we respond and our own emotions and emotional responses to people like her."