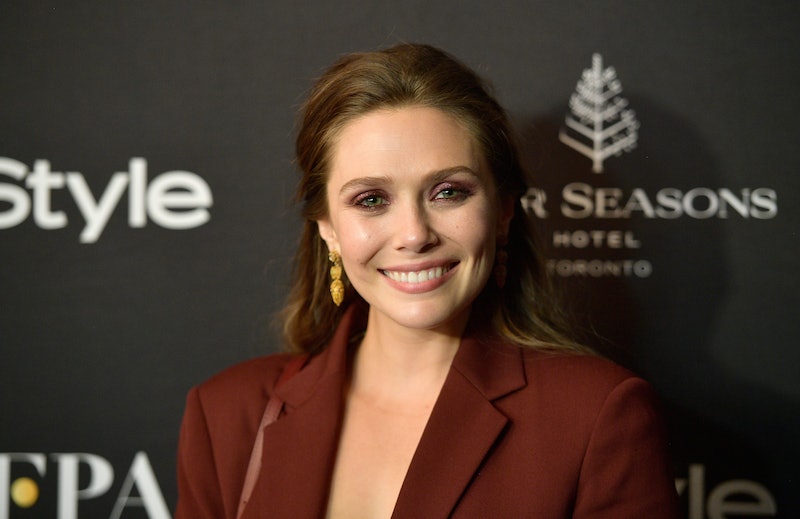 Did the Olsen sisters’ beaus put a ring on it? Elizabeth Olsen engagement reports surfaced on the same day as rumors about her sister Ashley Olsen's engagement. As per a source in PEOPLE, the Avengers: Endgame actor is reportedly engaged to her musician boyfriend Robbie Arnett. (Bustle reached out to Elizabeth Olsen's reps regarding the reports, but has not yet received a response.) The pair have been dating for about three years. Olsen made her first public appearance with the Milo Greene frontman in September 2017 at a pre-Emmys party in Los Angeles. The report comes on the heels of speculation that Olsen’s eldest sister Ashley may also be engaged to her artist boyfriend Louis Eisner. (Bustle reached out to Ashley Olsen's reps about the rumors, but has not yet received a response.)

As reported by E!, the Elizabeth and James designer was spotted out and about in Los Angeles on July 29 with Eisner, where she sported a black band on her left hand on that ring finger. The photographs of the band on that particular finger has resulted in speculation that the two may be walking down the aisle some time soon. Ashley and Eisner have been linked as an item for two years now, according to E! Could there be two engagements in the Olsen household?

While Ashley’s youngest sister Elizabeth has been tight-lipped about her relationship with Arnett, the Marvel actor has posted sweet snapshots of her love on social media in the past. On Instagram, she posted a series of collages of the two photographed on polaroids.

While the Ingrid Goes West actor has kept mum about her beau, she revealed in a 2017 interview with Modern Luxury that she was open to the possibility of motherhood. While speaking about renovating her home, Olsen told the publication, “I was also thinking, ‘There’s this small room upstairs, which would be good for a kid,’” she said. “I don’t know where things will lead, but I do think about it in that way: ‘I think I could raise kids here.'”

In the interview, Olsen also revealed the advice her notoriously private twin sisters Mary-Kate and Ashley imparted on her about media interviews. “They'd say, 'You know, even if you don't think anyone's going to read this article, someone might pull the quote later for [something else],’” she told Modern Luxury. "It's all part of how you hope someone interprets you, and how they frame who you are and the work you do... They're very tight-lipped — notoriously so."

This sound advice certainly explains why fans know so little about Olsen and Arnett’s relationship. Olsen’s engagement caps off a whirlwind summer for the actor. She last starred in the blockbuster hit Avengers: Endgame, where she reprised her role as Wanda Maximoff. She’s slated to star next in the Doctor Strange sequel Doctor Strange in the Multiverse of Madness, in theaters May 2021, as well as star in her own TV limited series WandaVision, set to debut on Disney’s streaming service Disney+ in spring 2021.

On Instagram, Olsen gushed about the exciting projects to come. “Between AVENGERS END GAME being #1, BLADE, BLACK WIDOW’s footage, WANDA VISION and all the other announcements @marvelstudios made yesterday, I couldn’t be more excited,” she captioned a series of photos from San Diego’s Comic-Con. “What a wild time! Keep em coming.”

With an engagement in tow, the exciting adventures just keep coming for Olsen. Congratulations are in order for Elizabeth and Robbie — and maybe Ashley and Louis, too?

More like this
Netflix Reveals First Look At Wednesday In The 'Addams Family' Spinoff Series
By Bustle Editors
Who Plays Trent In 'Never Have I Ever'? Benjamin Norris Calls His Character A “Himbo Stoner”
By Grace Wehniainen and Radhika Menon
Meet The New Team Of Residents Joining 'Grey's Anatomy' In Season 19
By Brad Witter and Sophia Moore
Everything To Know About 'RHONJ' Season 13
By Brad Witter and Jake Viswanath
Get Even More From Bustle — Sign Up For The Newsletter