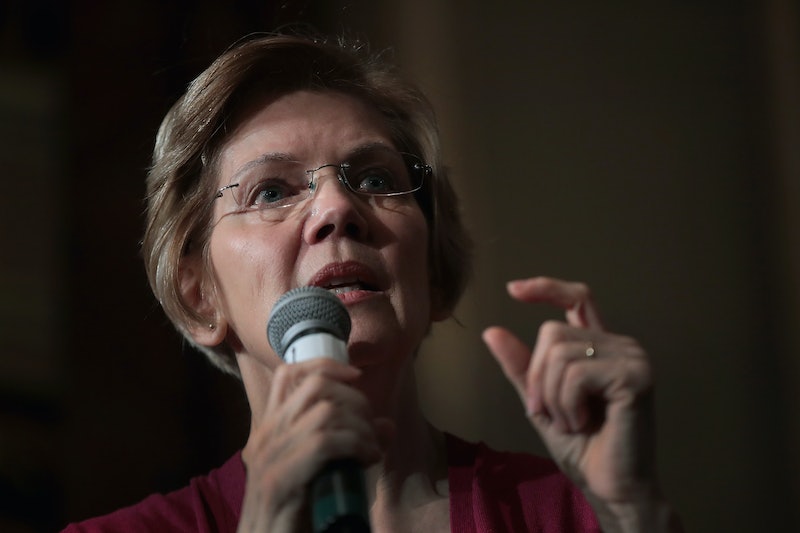 On a visit to Sioux City, Iowa, on Saturday, Sen. Elizabeth Warren spoke out again on her DNA test, which she took in response to President Trump and other Republicans' taunts like "Pocohantas" and challenges that she prove her Native American ancestry. CNN reported that while responding to a question from the crowd, Warren said she is "not a person of color." Warren also explained why she took the test in the first place.

The New York Post reported that this was the first question she was asked in the northwest Iowa city. "Why did you undergo DNA testing and give Donald more fodder to be a bully?" the attendee to the campaign event asked.

Warren explained that Republicans "honed in on this part of my history" and had used "racial slurs" to attack her. "My decision was we’re just going to put it all out there. It took a while, but just put it all out there. All of my hiring records, including the DNA test, it’s out there. It’s online. Anybody can look at it. It’s there," Warren told the crowd, according to The Des Moines Register.

She also acknowledged Trump's role in steering the conversation. "Now, I can’t stop Donald Trump from what he’s going to do," Warren said. "I can’t stop him from hurling racial insults. I don’t have any power to do that. But what I can do is, I can be in this fight for all of our families."

Trump had regularly taunted her over the issue. "I will give you a million dollars to your favorite charity, paid for by Trump, if you take the test and it shows you're an Indian. I have a feeling she will say no. She's based her life on being a minority," Trump said at a Montana rally in July.

After Warren released the results, she was criticized by some Native American leaders for being insensitive. Cherokee Nation Secretary of State Chuck Hoskin Jr. called it "inappropriate and wrong" and accused her of "undermining tribal interests with her continued claims of tribal heritage."

Warren responded to that criticism, too. "I am not a person of color," she told the crowd in Sioux City. "I am not a citizen of a tribe. Tribal citizenship is very different from ancestry. Tribes and only tribes determine tribal citizenship. And I respect that difference. I grew up out in Oklahoma. And like a lot of folks in Oklahoma we heard the family stories of our ancestry."

Trump hasn't completely let up on the taunting. He did not donate the promised $1 million to the National Indigenous Women’s Resource Center, the charity that Warren selected when she announced the results of the DNA test.

As recently as Jan. 3, Trump uploaded a fake bumper sticker on Twitter making fun of Warren's ethnic background and her 2020 bid. "1/2020th," it reads.

Warren was in Sioux City as part of a tour through Iowa with five stops that started Friday. On Sunday, in Des Moines, Warren told the crowd, "I’m here tonight because I believe. I believe in what we can do."

The race for 2020 appears to have started — and for now, Warren's DNA test remains an issue.