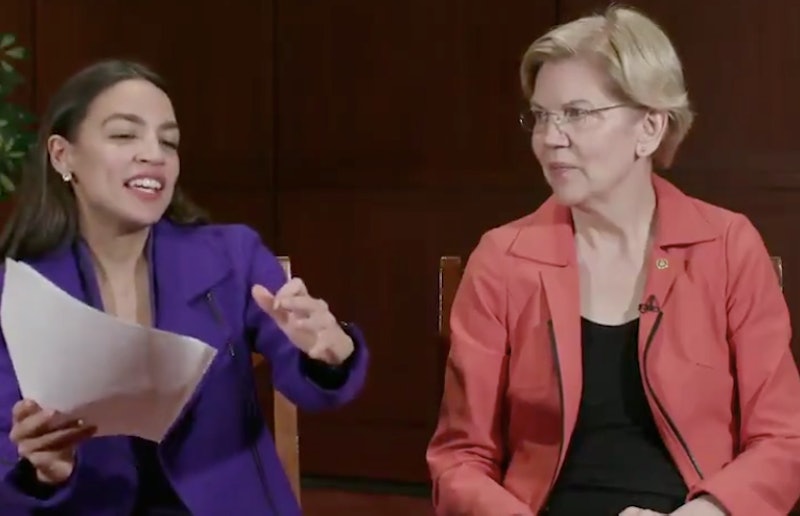 Were you disappointed at the end of the Game of Thrones series finale? If so, you've got friends in high places. Specifically, friends on Capitol Hill — and more specifically, two of the more prominent members of Congress out there. Elizabeth Warren and Alexandria Ocasio-Cortez's Game of Thrones video is exactly what you need in your life now that you don't get to watch the chronicles of Westeros play out on your screen anymore.

In the video, which Warren posted on Twitter on Tuesday, she and Ocasio-Cortez begin by agreeing that they didn't enjoy the finale that much. (Spoilers to come, by the way.) Ocasio-Cortez said she was "disappointed," while Warren claimed that it was "meh."

"I feel like we were getting so close to having this ending with just women running the world, and then the last two episodes..." Ocasio-Cortez said before Warren cut in.

"Exactly! And then one goes crazy," Warren said.

"It's like, they're too emotional," Ocasio-Cortez said to finish her thought.

Earlier in the season, Warren wrote an essay for New York Magazine throwing her support behind Daenerys Targaryen, saying that Dany was her "favorite from the first moment she walked through fire." In the series' penultimate episode, however, the Dragon Queen went on a killing spree and burned hundreds of civilians in her sack of King's Landing.

"It's like, ugh, this was written by men!" Ocasio-Cortez said, leaning back and covering her face with the papers she was holding.

Warren then addressed her previous support of Daenerys, saying that she was "willing to make a quick allegiance shift" after Dany's fire-fueled escapades.

"I was disappointed. We need to get some feminist analysis up in HBO," Ocasio-Cortez then concluded.

The series finale is indeed ripe for a feminist analysis. When the season began, Sansa was taking care of business up in the North, Cersei was the Queen of the Seven Kingdoms, and Daenerys was still a protagonist (despite a Red Cross analysis that, behind the famously brutal Ramsey Bolton, Dany had already committed the second-most war crimes of anyone on the show before the eighth season started). When the season ended, Sansa essentially held her position, but with a new title; Cersei was dead; and Dany was murdered by Jon Snow, who used a kiss in order to distract her while he carried out the deed. Arya had her moment during the Battle of Winterfell, but the series ended with her leaving Westeros to go exploring. Finally, of course, it was a man who ended up on the Iron Throne, after a different man suggested taking that course of action.

If you were indeed disappointed by Game of Thrones' ending, then you probably already knew you weren't alone — and now Warren and Ocasio-Cortez just gave you even more justification.